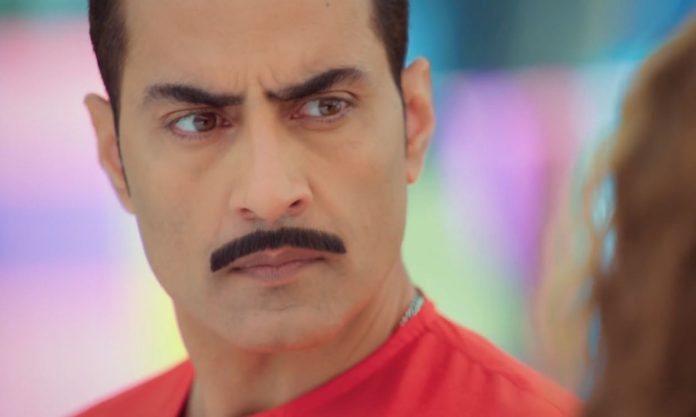 Anupama 24th January 2022 Written Update Vanraj accused Samar thinks to call and find where Nandini is. He sends a voice message/note to Nandini asking her to call back as she is unreachable. Kinjal takes Samar for kite flying. Paritosh informs everyone that Mamaji’s stomach got upset as he ate a lot of sweets. Before Baa goes to see Mamaji, Paritosh tells her that he made Mamaji sleep after giving him medicines. GK tells Bapuji that he got out of the competition. Bapuji says it’s fine and changes his glasses to reflectors. He further says that he would keep an eye on everyone.

Everyone shouts in cheer seeing Bapuji’s cool look. Anuj shows Anupama their kite. Anupama gets surprised seeing #MaAn written on it. Anuj says to Anupama that he thought their name should be on the kite as they are partners. Anupama blushes and leaves feeling shy. Anuj asks himself to control his feelings otherwise Anupama would make his cheeks red by slapping him. “Keech Te Nach” song plays and everyone starts dancing with each other. Vanraj and Anupama show anger to Anupama with their eyes. Malvika slips and Vanraj handles. Anupama feels angry seeing this. Kite flying starts. Everyone instructs their partners.

Anuj challenges Malvika that he will soon cut her kite. Suddenly, Kinjal says ouch. Samar asks her what happened. Kinjal says something went in her eye. She leaves the manjha reel in Samar’s hand to go and clean her eyes. Samar finds it difficult to handle reel and kite together. Anupama asks Samar to handle his kite as it may get cut. She sees Nandini picking up Samar’s kite reel and says that now her son’s kite won’t get cut. Everyone except Vanraj gets happy seeing Nandini behind Samar. Nandini asks Samar to save their kite. Samar smiles a little and handles his and Nandini’s kite. Anupama jumps in joy. Vanraj motivates Malvika and Kinjal motivates Samar.

Samar says “Kai Po Che” (You lost your kite) cutting GK and Baa’s kite. Baa gets angry at GK. She leaves telling GK that he doesn’t know how to play. Everyone laughs seeing and hearing this. Paritosh and Pakhi’s kite gets cut by Malvika’s kite. Vanraj praises Malvika and reminds her that they need to win this competition. Malvika says yes. Baa asks Samar to win and make his family proud. Anuj warns Samar that he is going to cut his kite. Samar’s kite gets cut by Anuj’s kite. He feels a little upset. Vanraj asks Malvika to focus on their kite. Malvika challenges Anuj and asks him to be ready to lose. Anuj says no chance. Malvika says she can dance on no chance too (can win anyhow).

Both brother and sister continuously challenge each other. Anuj tells Malvika that she wins every time as he intentionally loses. Malvika says losers talk this way every time. Baa cheers Malvika. She says competition between siblings always seems fun and enjoyable. Pakhi says she feels the happiest in defeating Samar. Malvika asks Anuj to not cry after losing. Anuj asks Malvika to not get angry at losing. Both brother and sister keep challenging each other. They start a bet. Malvika tells Anuj that he would go bankrupt if she wins the bet. Both Anuj and Anupama slip and their partners start handling the kites. Malvika motivates Vanraj. Vanraj asks Malvika to not worry, saying that now her string is in his hand. His words’ hidden meaning shocks Anupama.

Anupama asks Anuj to not worry, saying that she won’t let any mess happen and will make them win. Vanraj says the string as well as the kite are in his hands. Anupama tells Vanraj that the player isn’t in his hand. This angers Vanraj. Both Vanraj and Anupama get into competition mode. They concentrate on their kites. Anuj says his team will win. Malvika says her team will win. They continue this banter motivating their partners. Other family members too motivate Vanraj and Anupama. Vanraj asks Malvika to not worry. He confidently tells Anupama that she can’t beat him. Anupama tells Vanraj that she doesn’t need to do anything saying that Vanraj will lose by his own actions.

Vanraj gives angry glare to Anupama. Before Anupama could cut Vanraj’s kite, Kavya cuts Vanraj’s kite. Kavya gives an angry glare to Vanraj. Everyone gets shocked to see Kavya back. Kavya reminds Vanraj that she hurt herself last time. She tells Vanraj that now she has cut his kite as it was flying much higher than needed. Anupama asks Kavya to not create drama at the festival. Kavya asks Anupama why she didn’t stop Malvika when she created a scene during “New Year”. Anupama tells Kavya that they know Malvika’s pain and can understand it better than others as they have been through it. She asks Kavya to not misuse Malvika’s pain if she can’t understand it.

Anupama asks Kavya to say anything without involving Malvika in between. Anuj calls Malvika to him. Malvika goes and stands with Anuj. Kavya tells Vanraj that she handled his misbehavior with her. She asks him how dare he misbehaved with Nandini. Anupama thinks Kavya’s question is right but she asked it at the wrong time. Vanraj asks Kavya to not question him right now. Nandini asks Kavya to leave the issue for now. Kavya asks Nandini how she can let the issue go as someone supported her for the first time. She tells Nandini that it’s her (Kavya) time to support her (Nandini). Baa tells Kavya that she is right but requests her to not fight. She says Shah house lost everything due to its family’s fights and anger.

Kavya asks Baa why she didn’t stop Vanraj or say anything to Vanraj when he was insulting Nandini. She further asks Baa why she doesn’t understand daughter in law’s anger when she understands Vanraj’s anger. Kavya tells Baa that she doesn’t have the right to stop her from questioning Vanraj when didn’t stop Vanraj from misbehaving with Nandini. Kavya asks Vanrah to answer her. Vanraj taunts Kavya and indirectly tells her that their fight may get public if she continues shouting like this. Anupama tells Vanraj that he is also creating a scene while stopping Kavya. Vanraj calls Anupama an outsider and asks her to not interfere. Vanraj’s words shocks everyone.

Vanraj tells Kavya that he said everything right to Nandini. He reminds Kavya that Nandini was never his family’s choice for Samar. Vanraj tells Kavya that Samar can get many girls like Nandini. Samar tries to stop Vanraj. Vanraj scolds and reminds Samar that he doesn’t know what he wants in his life. He also reminds Samar that he himself broke his alliance with Nandini two days ago. Kavya asks Vanraj what else his children will learn living with him. She tells Vanraj that he has done a PHD in breaking relations. Kavya tells Vanraj that after breaking his own relationships now he has started breaking children’s relationships. She reminds Anupama that she told her that things will improve once Vanraj becomes something in life.

Kavya asks Anupama to see how Shah’s condition has become. She calls Vanraj a “Sociopath”, who lacks feelings, empathy and remorse. Kavya says Vanrah just has ego in himself. Anupama asks Kavya to talk at home. Kavya says she doesn’t care as Vanraj too doesn’t care. Anupama asks Kavya why she should do wrong when Vanraj is wrong. Vanraj asks Anupama who she is to call him wrong. Samar asks Vanraj who he is to talk to his mother this way. Paritosh tells Samar that he can’t talk to Vanraj this way. Kinjal tells Paritosh that he can’t talk to Samar this way. Kavya compares the Shah family to disco lights. She says everyone speaks together in the Shah family. Kavya asks Baa why she is standing silent instead of joining the argument.

She asks Baa if she is feeling fear of missing out. Vanraj tells Kavya that she is misbehaving with his family. She asks Vanraj if he felt how she felt when he misbehaved with her family. Vanraj asks Anupama can’t she see Kavya’s insolence. Anupama tells Vanraj that she won’t speak in between. Kavya says that no one cares for her like they care for Anupama and Samar. Baa tells Kavya that she went by informing them but Samar went missing without informing them. Kavya asks Baa why she didn’t try stopping her house’s daughter in law. She tells Shahs that neither she nor Nandini matters to them. In a low voice, Samar tells Nandini that he wanted to tell her the same thing. He further tells Nandini that he is against Kavya’s behavior and words, not Kavya.

Kavya says no one will get affected even if she dies. Bapuji asks Kavya if she thinks that they don’t care for her. Kavya tells Bapuji that no one cares for her. Bapuji asks Kavya to see herself and show everyone how many messages he sent her in the last two days. He tells Kavya that she didn’t reply to his messages or pick his call even once. Bapuji reminds Kavya that she talked to him and Baa about her interview on video call but didn’t tell them how it went afterwards. Kavya tells Bapuji that calling her after she left doesn’t matter when they didn’t stop them from leaving the house. Bapuji tells Kavya that she won’t go anywhere without his permission from now on. This shocks Kavya.

Kavya tells Bapuji that she is not a servant but daughter in law of the Shah family. She tells Bapuji that she won’t take his permission before going anywhere. Bapuji tells Kavya that he never stopped her because of this reason. Baa tells Kavya that she miss important things in between stupid things. She reminds Kavya that she asked for a break when she (Baa) tried to stop her. Baa asks Kavya to tell if she made any attempts to save relations as they tried. Kavya in a taunting manner says that she can see everyone’s efforts towards her as everyone is celebrating Sankranti without her. She indirectly says that Vanraj replaced her with Malvika.

In the next episode, Anupama will say that Kavya’s method might be wrong but her anger is justified. Malvika will say that she will always support Vanraj as the latter is right according to her. Anuj will tell Anupama that she must draw a line between her and Vanraj, otherwise she will always be caught in between them and their life. Nandini will tell Kavya that they should return to the US. Anupama will get shocked on hearing Nandini and Kavya’s conversation.

Reviewed Rating for Anupama 24th January 2022 Written Update Vanraj accused: 5/5 This rating is solely based on the opinion of the writer. You may post your own take on the show in the comment section below.