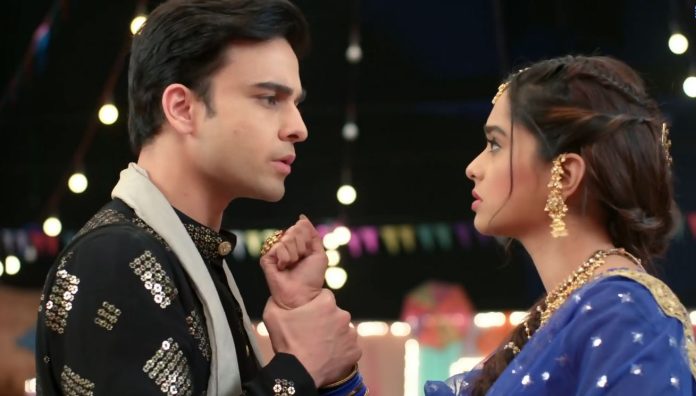 Kumkum Bhagya 26th January 2022 Written Update Amazing Pranbir Ranbir holds Prachi’s hand when they meet during the Lohri celebrations. She asks him to leave her hand. He tells that she has already gone away from him. He asks if she wants him to not support her. He wants to be with her. He realizes that she doesn’t want their togetherness. Rhea keeps an eye on them. She is glad seeing Ranbir going away from Prachi. Ranbir announces a game of musical chairs. He tells that the winner will get a big prize. Rhea tells that the winner should get a chance to hug Ranbir. Ranbir keeps her wish just to make Prachi jealous.

Dida encourages Prachi to show the reality to Rhea. She asks Prachi to win the game and hug Ranbir, making Rhea realize her real place. Prachi agrees. She promises Dida that she will defeat Rhea in the game. Dida, Shahana and Vikram support Prachi, while Pallavi and Aaliya support Rhea. Who will win the game to win the chance to hug Ranbir? Keep reading.

Earlier in the show, Pallavi finds Aaliya upto something. Prachi bumps into Rhea, who starts the insulting remarks. She tells that she doesn’t want to talk to her. Rhea asks her why does she hate her so much. Prachi asks Rhea to behave well and get respect for free, else her first Lohri will become the last one. Rhea tells that she is really scared. Prachi doesn’t want any fights on the Lohri day.

Rhea tells Prachi that innocence doesn’t suit her. She asks Prachi why did she wear Ranbir’s favorite colour. She reprimands Prachi for her attempt to please Ranbir. She asks Prachi how far will she run from her fate. She tells that bad luck will follow Prachi, she doesn’t have her parents and husband along, she has no family, even her sister is an enemy. She advises Prachi to run away if she wants to protect herself from hurtful truth. She tells that Ranbir will always be of her, Kumkum Bhagya will also be of her.

Rhea tells Prachi that Ranbir will always be of her, Kumkum Bhagya will always be of her, Prachi has no Kumkum, her Kumkum and Mangalsutra won’t matter when Ranbir isn’t with her. She asks Prachi to clear her illusion when she sees Ranbir and her taking the Lohri rounds. She asks Prachi to be happy for her sister. Jai tells Ranbir that he is getting bored, there is no high energy in the celebrations. Ranbir thinks to take him to Shahana. They hear Shahana telling the guests about the village style Lohri. Jai and Ranbir wish her happy Lohri. Shahana tells that Lohri should have some Dhamaka and fun.

Jai tells that it will be fun when she is around. Ranbir asks them to have fun. Jai compliments Shahana. She tells Jai that she will meet her later. Ranbir thinks of uniting them. He comes across Prachi. They get into a moment. He gets stunned seeing her wearing his favorite colour dress. He gets hurt by her, and she becomes his aid as well. She cares for him. He thanks her. She tells him that he freed her from the jail and now she helped him to return the favor. He stops her to remind their scores. Rhea finds him holding Prachi’s hand. She gets angry at the sight. Prachi asks him to leave her hand.

He reminds that she has gone away from him already. He tells that she is heartless and won’t understand anything that concerns a hearty emotions. He goes away. Rhea goes to interrupt Prachi’s thoughts. She asks Prachi isn’t she ashamed to get close to someone’s husband. She tells that Ranbir is her husband. She scolds Prachi for the dirty tricks. Prachi finds her insecure and taunts on her fear. Rhea calls Prachi frustrated on her bad luck. Prachi doesn’t want to answer her. She knows Rhea just wants to fight her.

She doesn’t want to fight Rhea’s dirty thinking. She lets Rhea free to think anything she wants. She warns Rhea that she will slap her next time and teach her manners. She asks Rhea to let her enjoy Lohri, nobody can stop her from staying happy if she can decided it already. She wishes Rhea happy Lohri and goes. Aaliya finds Rhea upset after the argument.

Jai follows Shahana. She asks him what is going on that he is after her. He denies it. She finds him nervous. He makes an excuse to run away. She asks him not to try to become a lover boy. She tells him that she likes the guys who walk along, but walk behind. He tells that he likes her, and now he will become her lover. Aaliya asks Pallavi to be honest with her. She asks who does she want as Ranbir’s wife, Rhea or Prachi. Pallavi tells that she wants Rhea as his wife. She has no doubt. She asks why is she asking. Aaliya tells that she is seeing Prachi and Ranbir’s reunion. Pallavi calls it impossible.

Aaliya tells that marriage always works, because of the husband and wife’s fight. She tells that Ranbir and Prachi started talking, there is no communication gap, their misunderstanding will clear and they will reunite. She asks Pallavi to help Rhea, make Ranbir close to Rhea, not Prachi. Vikram grows worried when the Dhol artists doesn’t come on time. He tells the problem to Ranbir. Shahana hears the problem. She suggests that they can play some games and entertain the guests. Ranbir and Shahana suggest the games.

Vikram tells that the guests should enjoy. Ranbir asks him not to worry. He asks everyone to pay attention, he has an important announcement to make. He wishes them happy Lohri. He tells that they can’t perform the puja right away, because there is time for mahurat. He tells the guests that they will play the musical chairs. He explains the game play to them and also the reward. Rhea shouts that the winner will get a chance to hug him. He happily takes her suggestion. Jai tells that he will become the monitor and not let anyone cheat. Rhea tells Prachi that she loves competition and winning as well.

She asks Prachi to see Ranbir hugging her. Prachi asks Rhea if she made the game a competition between them. Rhea tells that she wants to hug Ranbir. She goes to play. Shahana asks Prachi to defeat Rhea. Prachi doesn’t want to compete. Dida asks Prachi to stop Rhea from winning. Prachi swears to defeat Rhea in the game. Shahana tells that Ranbir will hug Prachi and then Rhea will die of envy. Dida and Shahana support Prachi. Rhea tells that she has to win the game some how. Pallavi and Aaliya promise to make her win at any cost. Jai tells Ranbir that both the teams are competing a lot. Ranbir tells that they made a little game turn into a cold war. Ranbir and Prachi get into a moment while playing the game. Aaliya fears their union.

Reviewed Rating for Kumkum Bhagya 26th January 2022 Written Update Amazing Pranbir: 5/5 This rating is solely based on the opinion of the writer. You may post your own take on the show in the comment section below.