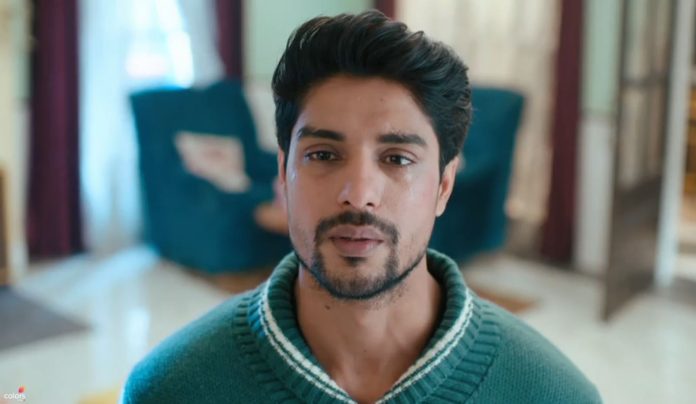 Udaariyaan 26th January 2022 Written Update Huge Revelation Gurpreet arrives home and stops Fateh from leaving. He asks him where is he going. He lies that he is going to meet the lawyer for Amrik’s sake. She asks him not to lie to her. She asks Khushbeer to stay away from her children. She rebukes him for supporting Fateh in his wrong decision. The family questions Fateh about his leaving’s reason. Gurpreet doesn’t want Fateh to go anywhere. Bauji asks what did Fateh decide. She tells them that Fateh was going to take Amrik’s blame on himself. The family learns about Fateh’s sacrifice.

Gurpreet tells that Fateh is going to sacrifice himself for the sake of the family. The family asks Fateh why is he hurting them this way. Fateh doesn’t think there is any way. Gurpreet commands him not to go away from her. She tells that both of her sons are dear to her, she can’t lose them. Khushbeer tells that he will hire the biggest lawyer to protect Fateh, he will not let Fateh suffer by marrying Jasmin. He feels its better if Fateh stays in the jail. Later, Rupy meets Jasmin. She tells him that Fateh and Tejo also came to meet her. He worries for Tejo. She tells that she didn’t harm Tejo.

She is glad that Rupy remembers their relation. He tells that he regrets that she is his daughter. He wants to make a request to her. Angad confesses his mistake in front of Tejo. He tells her that he was mad for her, and joined hands with Jasmin. She asks him how could he do this. She gets angry on him. He tells that he is also the reason that Fateh and his family are suffering. He asks her to listen to him first. Gurpreet wants to protect her sons. Khushbeer asks her to calm down, Fateh will get badly trapped by Jasmin.

Nimmo tells that they can tolerate Jasmin and answer her clever plans, they are united, they can face her, but Fateh won’t go to the jail. The family asks Fateh to support them, they will face Jasmin together. Fateh gets emotionally weak. He wishes Tejo was with him to explain them. He tells that they are right, but its his mistake, Amrik shouldn’t pay a price for his mistakes. Fateh asks them to let him go. Gurpreet asks him to marry Jasmin and stay back in the house, if he wants a punishment. Rupy tells Jasmin that he will sell his fields and house, to arrange her Canada visa.

He asks her to leave the village and spare Fateh’s family. He requests her to go away. Jasmin tells that Tejo told the same to her. Angad tells Tejo that Jasmin lied to him as well, he didn’t support her in the crime, but he is involved. He tells that Jasmin promised him that Tejo will be safe, Tejo and Fateh will get separated. He reveals about the fake accident. He tells that he didn’t know that Jasmin is troubling Amrik. Tejo learns the facts and is shocked. He asks her to run to Fateh’s house and tell them the truth. Nimmo tells that Fateh’s future will be ruined if he goes to the jail once.

Fateh tells that they have to understand it, time will heal all the wounds. Gurpreet threatens to die if he leaves. Fateh and the family rush to stop Gurpreet. She locks herself. Angad tells that he doesn’t want to make any other mistake, he wants her help, he didn’t wish to hurt anyone. He apologizes to Tejo. She understands Jasmin’s plan. She thanks himfor revealing the truth at the right time. She wants to flop Jasmin’s plan. Jasmin tells her revenge goals to Rupy. She tells that Fateh cheated her, she loved him and got humiliated in return. She wants to punish Fateh for his deeds.

She tells that Virk house will be sold, they will pay a price for humiliating her so much. Tejo calls Fateh. She panics when he doesn’t take her call. She rushes to the Virk house. She thinks if he went to the police station. Fateh tells Gurpreet that he won’t go anywhere. Khushbeer prays to find some way out to save his family. Tejo becomes their savior again. Fateh calls Jasmin. He tells her that he is ready to accept her conditions. He calls her home. Jasmin shares this good news with Rupy. She wants everyone to beg her for help. She plans to humiliate Tejo. Tejo’s scooty breaks down.

She runs on the road to reach Fateh. Fateh apologizes to Simran. He tells that Gurpreet and he can tolerate Jasmin for Amrik’s sake. He feels its too late now, he has to marry Jasmin to save Amrik’s life. Amrik feels guilty on hearing this. Jasmin arrives there with dhol and baaja. Amrik gets scared of her. He is still in trauma. Jasmin prepares to ruin Fateh, while Tejo struggles to reach Fateh in time.

Reviewed Rating for Udaariyaan 26th January 2022 Written Update Huge Revelation: 5/5 This rating is solely based on the opinion of the writer. You may post your own take on the show in the comment section below.