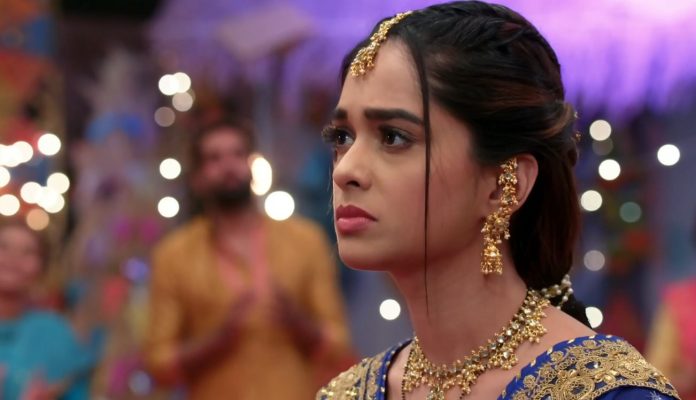 Kumkum Bhagya 28th January 2022 Written Update Lohri finale Prachi goes to her room to take medicines. Aaliya finds her resting in the room. She cleverly locks up Prachi inside and leaves without letting Prachi know her move. Later, Prachi goes to open the door. She finds the door locked from outside. She shouts for help. The family is outside in the lawn, celebrating Lohri. Pallavi reminds Ranbir that he promised to celebrate Lohri with Rhea. She asks him to keep his promise and take the Lohri wounds with Rhea.

Rhea considers the rounds as special as the wedding rounds. Pallavi asks Ranbir to remember their traditions and take the rounds with Rhea after the puja. Ranbir gets helpless to take the rounds with Rhea, while Prachi arrives back after getting help from Shahana. Rhea tries to stop Prachi and distance her from Ranbir, by planning to hurt Prachi. She ends up burning Prachi’s foot, but again her plan brings Prachi and Ranbir closer. Ranbir cares for Prachi and runs to her. Rhea is left fuming in anger over her failure. How will things change with Prachi’s return in the Lohri’s finale twists? Will Prachi intervene Rhea’s joyful moment once again? Keep reading.

Earlier in the show, Shahana gets excited seeing the dhol. She asks Prachi to come and dance with her. The Kohlis shake a leg and perform on the Lohri song. Rhea gets upset seeing Ranbir and Prachi together. Pallavi recalls Vikram’s words. Dida brings them together and asks them to smile. Pallavi forgets their issues. They enjoy their time. Ranbir and Prachi’s hearts beat for each other. He gets dreaming about Prachi. He helplessly loves Prachi. He takes her rightfully for a dance, making Rhea more shocked.

Ranbir and Prachi dance in the function, while Rhea angrily goes away. She asks Aaliya can’t she see Prachi celebrating with the family. She can’t control her anger. She tells that good is happening with Prachi, not her. She feels Prachi got Ranbir’s hug by winning the musical chair competition. She didn’t get anything, so she is angry. Aaliya asks her not to create the drama. Rhea tells that everything is a drama, no one could help her. She wants to take the seven rounds with Ranbir. She is sure that Prachi would also want to take the rounds with Ranbir. Pallavi asks them to come for the puja.

Ranbir and Prachi get away after their dance. Aaliya lies that Dida’s glasses are missing. She tricks Prachi to send her away. Prachi thinks to go and find Dida’s glasses. Aaliya follows her, and hides. Pallavi asks Dida to perform the puja first. Dida tells that they celebrate Lohri for every new thing, like a new relation or a new member coming. She asks Pallavi to begin the puja as the eldest member of the family. She gives her position and responsibility to Pallavi. Pallavi emotionally goes to Vikram. They perform the puja. Prachi gets scared seeing the maid suddenly. She asks the maid to go out and attend the puja. She looks for the glasses. Aaliya thinks to lock up Prachi. Pallavi and Vikram take the Lohri rounds.

Jai asks the dhol artists to play dhol. Ranbir looks for Prachi. Pallavi stops him and asks him to stay in the puja. Aaliya cleverly locks Prachi. Pallavi asks Ranbir to take the Lohri rounds with Rhea. Shahana comes inside the house to look for Prachi. Aaliya doesn’t want Shahana to help Prachi. Shahana doesn’t find Prachi and goes out. Aaliya tells Rhea that she locked Prachi in the room. Rhea calls her the best. Shahana asks the maid about Prachi. She goes back home to find Prachi.

Dida asks about Prachi. Aaliya tells that Prachi has gone inside, she will come out when Rhea and Ranbir’s puja ends, maybe she isn’t feeling good to see them together. Ranbir and Rhea perform the puja together. Prachi finds the room door locked. She knocks the door and asks for help. Shahana hears her and rushes to help her. She opens the door. Prachi tells that she has come to find Dida’s glasses but the door got locked. Shahana asks her to leave it and come with her for the puja. Dida waits for Prachi.

Shahana brings Prachi there and asks her to perform the puja for her baby. Dida asks Prachi to come fast. Prachi goes for the puja, but Pallavi stops her. She asks her to let Ranbir and Rhea’s puja complete fast. Dida comes to support Prachi and sends her to perform the puja with Ranbir. Rhea gets frustrated. She drops a firestick towards Prachi and hurts her feet. Prachi gets the burn and screams. The family worries for Prachi, while Ranbir runs to Prachi to help her.

Ranbir asks Prachi to come with him. She refuses to leave the puja. He asks her to perform the puja with him if she wants to complete it. He holds her to support and makes her walk alongside him. Dida and Shahana get happy seeing Ranbir and Prachi’s puja. Rhea stands still watching the lovers united. Ranbir tells Prachi that the puja is over, he will take care of her burn wound. She doesn’t want his help. She argues with him. He tells that he will not listen to him. He lifts her in arms out of concern and takes her. He doesn’t want Prachi to win the argument always. Rhea is left in tears.

Reviewed Rating for Kumkum Bhagya 28th January 2022 Written Update Lohri finale: 5/5 This rating is solely based on the opinion of the writer. You may post your own take on the show in the comment section below.