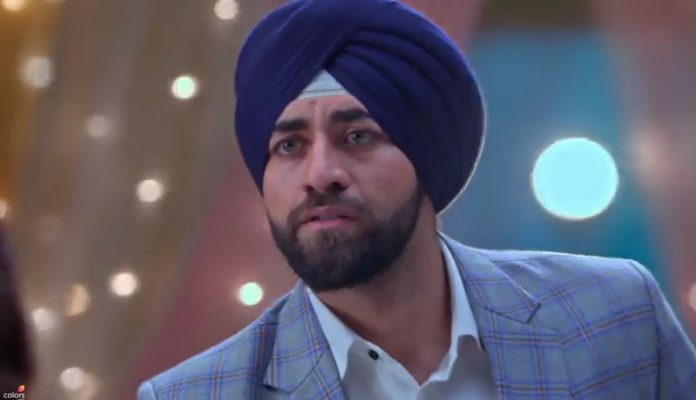 Choti Sarrdaarni 28th January 2022 Written Update Khushi meets Raj Devika’s father sees Harleen coming towards her and leaves jewelry. He thanks her for keeping their respect in the ritual. Seher gets upset as no one is telling her about the surprise. Kulwant explains to Seher that sometimes patience is good. Seher makes a sad face. Raj smiles seeing Seher’s desperateness for the surprise. Devika’s fake mothers eyes Gill’s silver utensils. Devika sees her and punishes and scolds her beggar habits. She leaves, warning her fake mother to behave. Seher searches for Raj.

Raj takes advantage of Seher being alone and tries to get romantic with her. He asks her to give him a kiss to know the surprise. Seher pretends to kiss Raj but escapes teasing him. Kulwant sees them and they handle the matter by taking a selfie. Devika tells the guests that she got the reward of serving the poor and needy since childhood. She tells her reward is Param. Devika says now she wants to give a gift to Param. She starts performing on a Rajasthani song. The lights get dim. Devika signs her fake brother to work on their plan.

Devika’s fake brother takes all the ritual jewelry in a room. He calls someone and asks the person on the other side of the call to make similar imitation jewelry. Seher finds a necklace fallen on the floor. Before she could check it, Raj stops her and gets romantic with her. Seher again goes towards the fallen necklace. Devika stops her and takes her to dance. Raj imagines romancing and dancing with Seher alone. His imagination breaks with someone’s push. Everyone, Gills, Dhillons and guests get busy dancing together on Rajasthani and Punjabi songs. Karan sees Devika’s fake brother picking up something from the floor. He thinks about what Devika’s brother is doing alone, leaving the function.

Raj and Seher are seen dancing. Seher requests Raj to reveal the surprise. She promises Raj that she will surely give him a kiss after he reveals the surprise. Raj asks her if she is telling the truth. Seher says it’s a “Jatni’s promise. She tells Raj that she can’t ever lie to him as he is everything. Raj gets happy hearing it. Seher gets shy. Raj goes to bring his surprise. He searches for someone. On the other hand, Khushi and Abhi are seen on the way to Gill Mansion in their car. Khushi tells Abhi that she has a strong feeling that she will meet RV in Amritsar soon. Abhi asks Khushi if she would forgive and accept him. Khushi says she will for herself and for her son Prince.

Abhi asks her if RV would have gotten married to someone. Khushi replies that she doesn’t care. She tells Abhi that she would go to any extent to get RV. At Gill Mansion, Raj brings a ring for Seher. Seher gets happy seeing it. Raj and Seher try to reach each other in the function crowd. Suddenly the ring falls from Raj’s hand. Rings gets pushed again and again and reaches near Khushi’s feet. Khushi and Abhi are seen near Gill Mansion’s entry. While Khushi gets happy seeing Raj. She thanks God. Raj feels confused seeing her. Khushi picks the ring from the floor. She recalls Harleen getting angry at her years ago. Flashback shows Harleen asking Khushi how she can give birth to a person’s kid, whom she met once and he left her in a pregnant condition. She tells Khushi that she is ruining her life with her decision.

Robbie tries to control an angry Harleen. Khushi tells Harleen that she can’t understand her love. She tells Harleen that she fell for RV in one sight. Flashback ends. Khushi calls Raj RV. Raj also recognizes Khushi and asks her how she is. Seher, Harleen, Robbie and Dhillons get happy seeing Khushi after a long time. Before Seher could move forward to meet Khushi, Khushi hugs Raj tightly. Everyone gets shocked and confused seeing this.

Reviewed Rating for Choti Sarrdaarni 28th January 2022 Written Update Khushi meets Raj: 5/5 This rating is solely based on the opinion of the writer. You may post your own take on the show in the comment section below.