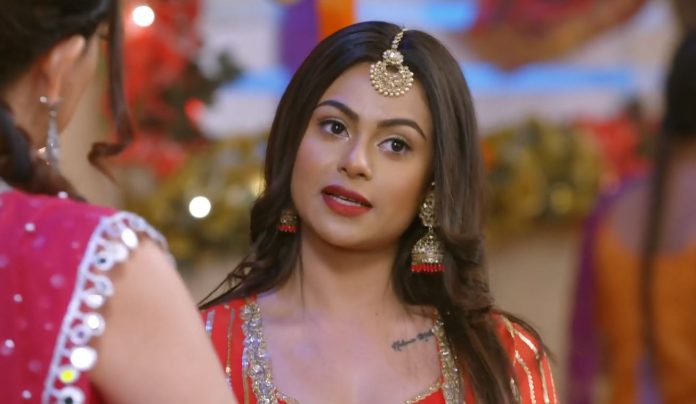 Kundali Bhagya 3rd February 2022 Written Update Evil Natasha Natasha makes a plan to separate Karan and Preeta. She tells that she will create many misunderstandings between Karan and Preeta, that Preeta’s jealousy will soon change into suspicion. She tells that once faith breaks down in a relation, then the relation doesn’t stay the same after the partners suspect each other. Prithvi meets the goon and likes the coconut bomb. He is impressed with the goon’s talents. Natasha, Prithvi and Sherlyn get their hands on the same target, Preeta, and aim to kill her and make her out of Karan’s life forever. How will Karan protect Preeta whose life is under threat? Keep reading.

Earlier in the show, Shrishti and Janki meet Preeta in the Lohri celebrations. Shrishti tells that she loves Preeta a lot. Preeta tells that she also loves him a lot. The sisters are selfless. Janki tells that she is selfish and demands their love. They have a laugh. Shrishti asks about Mahesh. Preeta tells her that Mahesh is normal, he identified everyone for a while. She narrates the emotional moments. She cries. She tells that she sees her dad in Mahesh. Janki asks her to just stay happy today. Prithvi keeps an eye on Preeta. Kritika asks him what is he doing. He tells that he is seeing everyone happy, its like the old days.

He feels everything changed since Mahesh gave him the business duties, everyone misunderstands him but he loves the family a lot. She hugs him with love. Kritika tells Natasha that Prithvi and her patchup has happened. Natasha calls it a good news. Prithvi doesn’t want Natasha to spill beans on his plans.

Natasha warns Sherlyn that she can lose Prithvi, who is acting very close and romantic with Kritika. Sherlyn asks her to mind her own business and not provoke her against Prithvi. Kareena doesn’t want the happiness to get down because of Shrishti and Janki. She asks them not to do any drama today, because the day is special for Luthras, Mahesh has come out of the room after a long time. She warns them. Janki tells that they shall celebrate happily. Shrishti meets Mahesh and wishes him. The family is glad to know that Mahesh wants to dance on dhol beats.

Preeta wants to tell Karan to call the dhol artists. While she stands thinking what to do, Karan makes an entry with Sameer, playing the dhol for Mahesh’s happiness. Preeta gets surprised. Mahesh dances on the dhol beats. The family is happy for him. Shrishti and Sameer also shake a leg together, but she still remembers their differences. Prithvi waits for the goon to come and hand over the coconut bomb. Prithvi is called for the dance with Kritika. Prithvi has to stay in good books. He performs with Kritika. Mahesh gets sacred seeing Prithvi.

Rakhi observes Mahesh’s terrified behavior and takes him away from Prithvi. Karan and Preeta perform the Lohri dance. Natasha comes in between and makes them away. Shrshti angrily makes Natasha away, all performing the dance and making gestures. Preeta goes away, followed by Karan. Sherlyn takes Natasha for a talk. She asks Natasha what is she doing with Karan. Natasha asks Sherlyn what does she want to hear.

Sherlyn tells that her plan is bringing Karan and Preeta together. Natasha asks her not to follow the rule book. She boasts of her plans. She tells that her plan of impressing Karan didn’t work, now her second plan has started, Karan wants her help to make Preeta jealous, but Preeta won’t come close but go away from him. She wants to create suspicion between them and break their relation. She tells that she also has another plan, it will help her achieve her dreams.

She wants to marry Karan. Sherlyn asks her about the new plan. Natasha asks her to relax and know the latest plan later. Karan follows Preeta, and imitates her. They have a romantic moment. She asks him why is he following her. He tells that he is liking her jealousy. She laughs on his attitude. She asks him not to argue much and anger her. He asks what does she want. She confronts him about his likes for Natasha. He calls her jealous. She asks him who is Natasha and why does she stay in their house. She denies the jealousy.

She tells that she likes their jodi a lot. She makes fun of Karan and Natasha. They have their funny banter going on. She goes to Shrishti. He tells that Preeta is still the same, she can never change. She also thinks the same about him. She tells Shrishti that she just came after talking to Karan. Janki tells that Karan shouldn’t cross limits, he can’t break her heart.

Reviewed Rating for Kundali Bhagya 3rd February 2022 Written Update Evil Natasha: 4/5 This rating is solely based on the opinion of the writer. You may post your own take on the show in the comment section below.