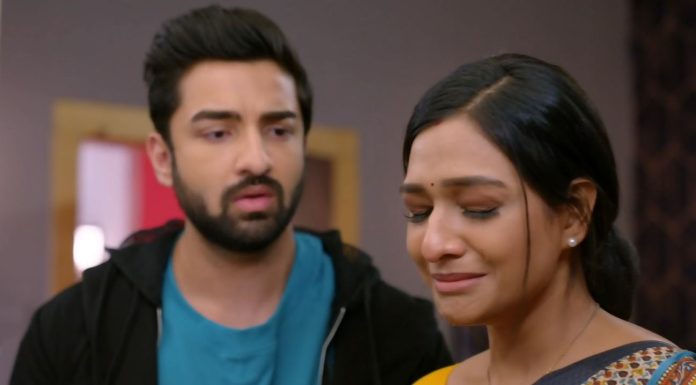 Bhagya Lakshmi 3rd February 2022 Written Update Lakshmi hates Rishi Malishka tells Lakshmi that the ring is the best, as if it’s made just for her. She holds Rishi close and shows her right on him. Lakshmi taunts Malishka that the most precious and beautiful thing isn’t made for everyone, one who doesn’t deserve it can still buy it. Rishi understands that Lakshmi is actually talking about him, not the ring. He goes to Lakshmi when she sides away to shed tears. He tells her that he never did anything wrong with her, he loves Malishka and also Lakshmi.

Lakshmi cries a lot seeing Rishi. she is shocked to hear his disgusting confession, which he tells in his innocent mind frame. He is actually confused between Lakshmi and Malishka. He doesn’t know his heart, whom he loves and who completes him. He tells that he used to love Malishka, and now he loves Lakshmi. He hugs her to console, but she pushes him away with a warning. She asks him not to touch her. She tells that she hates herself that she has fallen in love with a man like him who supports polygamy. Rishi fails to explain Lakshmi that he didn’t mean that. Lakshmi really starts hating Rishi for his selfishness. She tells him that he has to choose either of Malishka and her. Who will Rishi choose? Will he realize his true love for Lakshmi? Keep reading.

Earlier in the show, Rishi looks for Lakshmi. Malishka meets Lakshmi again and pities her. Malishka asks Lakshmi to show her some engagement rings. She orders her to bring that pendant and show her. She tells that she will show it to her would be husband. She doesn’t leave a chance to insult Lakshmi. She likes a ring and taunts Lakshmi.

Malishka calls Lakshmi a person filled with negativity. Lakshmi asks her to stay in her limits. Malishka tells that she will complain about her to Kalyani, she wants the best ring to make a sweet memory with Rishi. They see Rishi behind. Malishka tells that he is her Rishi. Rishi asks her to stop. Lakshmi wants to call someone else. Malishka asks her to choose the ring that she would like, if she likes it then Lakshmi will get a promotion. Lakshmi suggests a ring. Malishka criticizes her choice. She chooses another ring and calls it the best.

Kalyani asks Lakshmi to take Malishka to the clients room. Malishka refuses to go. She removes the ring. Rishi and Lakshmi go to pick the ring. Their heads collide once. Rishi hits their heads again and remembers her words. They get into a moment. He tells that he wants to talk to her. She goes away. He thinks to talk to her some how. She doesn’t want to talk to him. He also goes to buy some engagement rings. He wears a tight ring intentionally to get Lakshmi’s attention. He asks Kalyani to send Lakshmi for his help. Kalyani asks Lakshmi to go with Rishi and help him.

He thanks Lakshmi for coming with him. Neha comes back home and hugs Rano. Rano is very happy to see her back. Rano commands Shalu and Bani, and treats them as servants. Neha tells that they will keep Lakshmi and her sister as their servants. She tells Rano about her boyfriend. Shalu doesn’t want Rano to vent her anger Lakshmi, who would tolerate everything silent when she is already so sorrowful. She knows that Lakshmi broken down because of Rishi. She wants to support Lakshmi. She tells that Lakshmi is being strong for their sake. Rishi and Lakshmi get to spend some private time in the clients room. She asks him what does he want to say.

He apologizes. She tells that his sorry also looks fake like him. He wipes her tears. She stops him from wiping her tears. He doesn’t listen to her. She asks him to look into her eyes and tell her if he was sincere towards her for once. He tells that he always told her the truth, whenever he told her his feelings, like she is really good, he likes her, he felt peace hearing her voice, they are made for each other, she looks very pretty, it was all a truth that he is more lucky to get you, he said it truly that he doesn’t want to give her sorrow. He tells that he is living just on these truths. He asks her to not cry.

Reviewed Rating for Bhagya Lakshmi 3rd February 2022 Written Update Lakshmi hates Rishi: 5/5 This rating is solely based on the opinion of the writer. You may post your own take on the show in the comment section below.