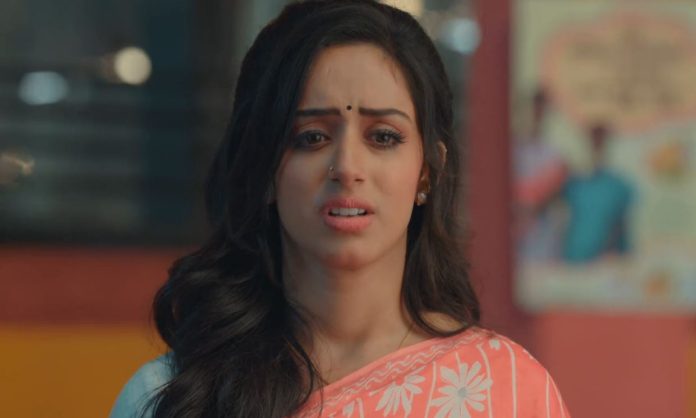 Yeh Hai Chahatein 2nd February 2022 Written Update Prisha in trouble Prisha asks Rudra why he has ruined his hairstyle even being a rockstar. Rudra tells Prisha that she won’t understand his stylish and cool ponytail look as she has no fashion sense. Prisha tells Rudra that his look isn’t cool but instead looks like that of a baboon. Rudra asks Prisha whom she is calling a baboon. Prisha pulls Rudra’s pony and calls him a baboon. Rudra asks Prisha to not touch his pony. Prisha continuously pulls Rudra’s ponytail. Rudra grows irritated and pulls Prisha’s ponytail. Ruhi enjoys her parents’ funny banter from the back seat.

Prisha suddenly sees a truck coming in the way of their car. Scared Prisha asks Rudra to look forward. Rudra asks Prisha to not make excuses. He looks forward after hearing Ruhi’s scared scream. Rudra immediately turns the direction of his car. The car stops aside. All three of them relax on getting saved. Bunty drops Sharda at Khurana Mansion. Sharda asks Bunty if he bribed Yuvraj’s mechanic. She tells Bunty she saw it from her own eyes and asks him to not lie. Bunty tells Sharda that he intentionally got Yuvraj’s car punctured from the mechanic. Sharda asks Bunty why. Bunty replies that he wanted Rudra to drop Ruhi and Prisha to Rohtak instead of Yuvraj.

Sharda asks Bunty why he did this even after Prisha revealed that Ruhi is Yuvraj’s daughter. She further asks Bunty why he is trying to unite Rudra and Prisha even after knowing the whole truth. Sharda asks Bunty to understand the situation. She tells Bunty that he should have at least thought that Ruhi may get hurt in all this. Bunty thinks about how to make Sharda understand that Ruhi is actually Rudra’s daughter and her granddaughter. He asks Sharda to not worry as Rudra would return after dropping Prisha and Ruhi. Bunty further says that after this Prisha and Ruhi won’t enter Rudra’s life ever. Vaijayanti gets shocked on hearing Bunty and Sharda’s conversation. She gets upset on realizing that Sharda has started lying to her.

On the other hand, Rudra, Prisha and Ruhi get out of the car seeing smoke coming out of it. Flashback shows Bunty and Mechanic planning and breaking Rudra’s car. It also shows that Bunty got happy thinking that Rudra, Ruhi and Prisha would get to spend time with each other. In the present time, Rudra checks the bonnet of his car. Prisha gets worried when Rudra screams. She asks Rudra why he touched the hot bonnet and burned his hand. Seeing Prisha’s care for him, Rudra looks at her. Both of them get lost into each other. Ruhi feels good seeing Rudra and Prisha lost in each other. She goes inside the car and informs Prisha that Yuvraj is calling her. Rudra and Prisha come back into reality.

Prisha picks up the call and asks Yuvraj what he wants now. Yuvraj tells Prisha that he took the cab to reach Rohtak early. He asks her where she and Ruhi reached. Prisha thinks Yuvraj will create drama if she tells him the truth. She lies to him that she is about to reach Rohtak and disconnects the call. Rudra gets shocked hearing Prisha’s lie. He asks Prisha if Yuvraj can’t stay away for even less time from her. Prisha replies that Yuvraj can’t stay away from his daughter and love for long. This angers Rudra and he takes out a big bottle from the trunk. He informs Prisha that he is going to get water to cool the car radiator, so that she can meet “her Yuvraj” soon. Prisha and Ruhi don’t let Rudra leave them alone.

She further tells Vaijayanti that the situation has changed and Rudra-Prisha won’t reunite now. Sharda tells Vaijayanti that she lied for her peace only. She further tells Vaijayanti once Rudra returns after dropping Prisha and Ruhi, they would live their own lives. Sharda tries to calm Vaijayanti by telling her that Rudra would hers only. Vaijayanti tells Sharda that she hopes that what she is saying will happen. On the other hand, Rudra, Ruhi and Prisha are seen wandering in the forest in search of water. Ruhi continually tells Prisha and Rudra that she got tired and can’t walk anymore. Rudra picks up Rudra on his shoulder. Prisha wishes that Rudra and Ruhi could have always been like this. She blames her, Rudra and Ruhi’s fate for their situation.

Ruhi says she is hungry. Prisha asks Ruhi not to worry as they would buy something on finding the market. Rudra says they won’t find any market in a place like this. He says they should find something edible on trees to eat. Rudra sees a mango tree. He says he would make the mangoes fall from the tree with his shooting talent. Rudra tries to shoot mangoes with stones and sticks continuously, but fails. Ruhi and Prisha laugh at him. “Yeh Hai Chahatein” title song plays in the background. Ruhi tells Rudra that they would have to climb the tree to pluck the mangoes. Rudra tries climbing the tree but falls again and again. Ruhi and Prisha laugh at him.

Ruhi tells Rudra that he can’t climb the tree because he is from the city. She says only people from the village can climb the tree. Prisha asks Rudra to see her and learn. Rudra gets shocked. Prisha climbs the tree and plucks the mangoes. She throws the mangoes towards Rudra and Ruhi. The tree branch breaks but Rudra catches Prisha and saves her from falling. Both of them get lost in each other. Ruhi enjoys their romance while eating mangoes. Rudra asks Prisha when she learned all this. Prisha tells Rudra that she learned everything due to her situation in the last five years. She further tells Rudra that a single mother can tolerate everything but can’t see her daughter hungry.

Ruhi feels happy thinking that her idea is working. Bunty calls Rudra to know what is happening exactly. Rudra receives Bunty’s call and tells him that they are stuck in the forest. Je requests Bunty to send a mechanic. Bunty tells Rudra that he can send the mechanic but it would take time for him to reach his location. He asks Rudra to find water to cool the carbonator till then. Rudra disconnects the call saying okay. Bunty thinks that he won’t send any mechanic. He hopes that Prisha tells the truth to Rudra.

In the next episode, Prisha will land into a swamp by mistake and will call Rudra for help. Rudra will ask Prisha to not move. He will tell her that she would get more stuck in the swamp as much as she would try to get out. Ruhi will cry seeing Prisha in trouble.

Reviewed Rating for Yeh Hai Chahatein 2nd February 2022 Written Update Prisha in trouble: 3/5 This rating is solely based on the opinion of the writer. You may post your own take on the show in the comment section below.