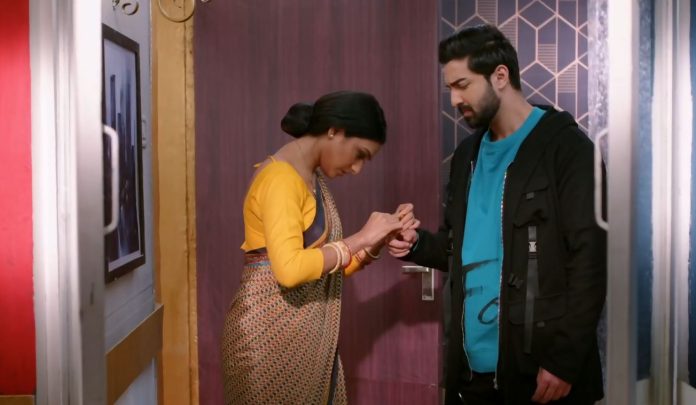 Bhagya Lakshmi 4th February 2022 Written Update Lakshmi accused Rishi talks to Ayush after Lakshmi walks off. He tells Ayush that he has snatched the smile from Lakshmi’s face, and also the beaming light of joy from her eyes. He regrets his actions that broke her heart. He tells Ayush that he can’t see Lakshmi so shattered and sorrowful. Rishi gets hurt, and Lakshmi runs to care for him. Rishi gets her help. They get into a moment. Malishka looks for Rishi and Lakshmi, and finds them together. She calls up Karishma to vent out her frustration.

She tells that Rishi doesn’t just have care and respect for Lakshmi in his heart, but also something else like love. She wants to remove Lakshmi from his life. Karishma advises her to do something to spoil Lakshmi’s image, so that nobody trusts her again. She asks Malishka to defame Lakshmi in a way that the latter doesn’t have courage to face anyone in the society. She further hints Malishka to rush and frame Lakshmi in the theft case. She tells that Lakshmi should be tagged a thief, once her CV gets the stain of a thief, then police will arrest Lakshmi and things will get solved for Malishka.

Malishka follows her evil advice and executes it. She goes and robs some jewellery. She puts the stolen jewellery in Lakshmi’s purse. She wants Lakshmi to get caught as a thief, so that Lakshmi loses her job, image and confidence. Will Rishi come to Lakshmi’s rescue from this new blame game? Keep reading.

Malishka calls Rishi, and he doesn’t answer. She asks Kalyani about him. Kalyani tells that a ring got stuck in Rishi’s finger and he went to the clients’ room to get help, Lakshmi is helping him there. Malishka is shocked to know this. She rushes to see him. Rishi stops Lakshmi and asks her to just talk to him once. He tells that he got the ring stuck intentionally just to get her for a talk. She asks him if he is showing his little pain, after breaking her heart. She tells that he is mean and selfish to use her. She calls him a bad person who has moved on so soon after breaking the marriage. She tells that Malishka insulted her a lot. She congratulates him for his marriage happening with Malishka. She cries. He hugs her to console. She asks him to not hug her, because he is the person who gave her sorrow. She tells that she always thinks he is good, but he always proves her wrong, he didn’t come to save her, he doesn’t care for her.

Malishka goes to look for Rishi. Karishma is angered thinking of Neelam’s words. She calls Malishka. She asks Malishka how can she be so careless. She tells that Rishi’s life is ruined, he is bearing a lot, she should return to his life. She asks her if she knows what is going on. Malishka tells that she knows everything about the divorce matter, if Rishi’s life is ruined, then even she is in a mess. She tells Karishma that Viraj created a big drama after knowing the truth. She adds that Viraj broke the relation, she isn’t upset, but she is still in stress. She tells that Rishi is with her, they have come to a jewellery store for shopping, Lakshmi is the saleswoman here, it’s the bad fate that brings Lakshmi in front of her always. Karishma tells that she isn’t getting Malishka’s voice. The call hangs up. Malishka still searches for Rishi.

Rishi asks the man to remove his ring. Lakshmi goes out, but hears Rishi’s scream. She asks the man to handle with care. Rishi tells that it will hurt a bit. He asks Lakshmi to apply the ointment and remove the ring. Rishi tells that he can tolerate the pain. She helps him with his ring. Rishi still feels much hurt. Lakshmi cares for him. Malishka watches them. Karishma calls her back. Malishka tells her that Rishi has agreed to marry her, he said he will inform Neelam as well, her happiness is still suffering because of Lakshmi. She regrets that Rishi still cares for Lakshmi. She tells that Rishi claims that his guilt and relation, everything is over, but he has something in his heart.

Karishma asks her to stop behaving insecure. Malishka asks her what can she do to separate Rishi and Lakshmi. She calls Lakshmi a curse for her. Karishma asks her to calm down. Malishka tells that Rishi had a big fight with Lakshmi in the morning, but he is still with her, he doesn’t even notice his love/Malishka in front of Lakshmi. Karishma tells that it’s a big concern if he still thinks of Lakshmi. She asks Malishka to ruin Lakshmi’s image and name, so that everyone laughs on her and doesn’t trust her again. She gives ideas to Malishka to defame Lakshmi by blaming her for the jewellery theft. She tells that Lakshmi should go back to her village, once she faces an arrest. Malishka agrees to execute this evil plan. Ayush wishes Rishi and Lakshmi unite. He knows that Rishi is innocent, and so is Lakshmi.

He prays that Rishi gets to see Lakshmi’s love. Lakshmi gives a toffee to Rishi. He tells that he isn’t a little kid to eat toffee and forget his pain. She tells that the toffee wrapper will help him in getting the ring removed. He apologizes to her. He realizes that she cares for him, when he has hurt her a lot. She asks him to move on, he isn’t the same and even she isn’t the same, they are out of their illusion. She removes the ring finally and goes. Rishi turns sad.

Reviewed Rating for Bhagya Lakshmi 4th February 2022 Written Update Lakshmi accused: 5/5 This rating is solely based on the opinion of the writer. You may post your own take on the show in the comment section below.