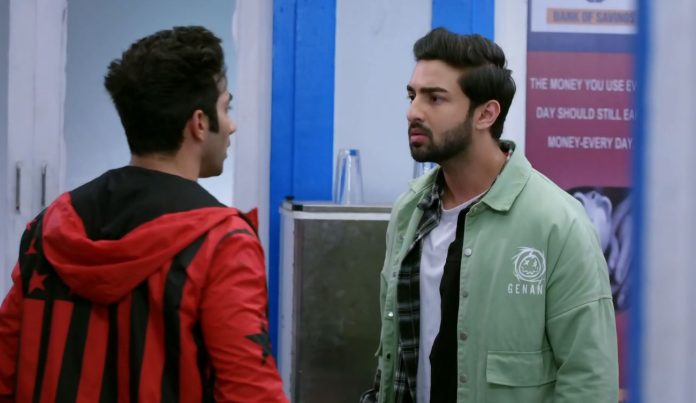 Bhagya Lakshmi 14th February 2022 Written Update Robbers attack The robber chief informs that he has covered the cctv cameras, and now the gang should come inside. The gang enters the bank. Rishi tells Ayush that he wants to patch up with Lakshmi. He reveals that he got a card for Lakshmi. Ayush meets Shalu and tells her that its valentine’s day and they shall help Rishi and Lakshmi on this day, so that the couple sorts their issues. Rishi and Lakshmi get into a moment. He gets upset by her indifference. Ayush gets the card that falls from Rishi’s folder. He takes that card to Shalu and asks her to give it to Lakshmi. He requests Shalu. Shalu goes to give the card to Lakshmi. Lakshmi asks who has sent the card. Shalu tells that its given by Rishi. Malishka asks Rishi if he has put the jewellery in the locker.

Rishi tells that he has put the jewellery. Malishka asks Rishi for her card. Rishi looks for the card. He tells that he had that card in the folder, maybe it fell down somewhere. He goes to ask Ayush if he has seen any card. Ayush tells that he has given the card to Shalu to give it to Lakshmi from Rishi’s side. Lakshmi reads the card and cries a lot. Rishi worriedly rushes to Lakshmi. Malishka learns that Rishi has opened a joint account with his wife Lakshmi. Malishka grows raging and snatches the form to tear it. She confronts Rishi for the card. The robbers attack the people at the bank to rob the cash. How will Rishi and Lakshmi get saved? Keep reading.

Earlier in the show, Lakshmi takes a new form to fill. Shalu tells Mona that she is Lakshmi’s sister. Mona tells that she made a mistake. Shalu tells that she won’t tell anyone about the form’s mistake. Lakshmi asks someone about the address row. Yogesh greets her and tells her that he remembers her, he saw her with Rishi, Rishi is his brother’s good friend, he is a good person. Rishi meets Yogesh. Yogesh asks Lakshmi why did she come to the bank for a little thing. He tells Lakshmi about the new offers from the bank. He suggests them to open a joint account with free facilities. He hands over the joint account form to Rishi. Rishi fills the form. He gets into a moment with Lakshmi. Yogesh makes her sign the form as well. He tells that he will become the best employee of the month if he reaches the target by opening their joint account. He adds that his dad will be very happy with his success. Lakshmi signs the form on getting emotional. Stay tuned.

Lakshmi signs the form. Rishi understands that she thinks of others before herself. He doesn’t know why. Shalu gives the documents. Rishi smiles seeing Lakshmi smiling. He wants the moment to stop. He tells that she looks good when she smiles. The robbers boss Arjun covers the cctv cameras with ink spray. He plans to make the bank manager hostage. Shipra tells that they will not do anything until Arjun orders them. Karishma tells Ayush that she is his mother and would double check the form once. Ayush asks her to check as she wants. Rishi tells Lakshmi that he won’t say sorry now, she really looks good when she smiles. She asks him to stop behaving like nothing happened, because everything has changed between them now. He asks her not to hurt herself. He tells that she shouldn’t torture herself.

She tells that everything was true for her, not for him, because he moved on so soon, like he is heartless. He asks her to decide it herself. He tells that she left everything for the right reason, he couldn’t become a good husband, he didn’t do anything deliberately. He adds that he just thinks of her and that’s why Malishka is upset. She asks him to become of Malishka, and stop thinking of her/Lakshmi. He asks her to know how tortured he is feeling, he is feeling suffocated for no reason. She tells that he is feeling so because he did wrong with others. He thanks her for suffocating him with guilt again. They have a moment before he goes away. She tells that he is bad, because he did bad with her. She feels he has finished everything between them. Shalu and Ayush come across each other.

They also get into a moment, while a song plays in the background. Shalu thanks him for always supporting Lakshmi. She tells that she didn’t forgive him for hiding Malishka’s truth. She is thankful that Ayush brought Rano’s truth out, he didn’t let any misunderstanding come between. She tells that he cleared Lakshmi’s name that day. He asks her if she wants to become his friend again. She refuses to him, but doesn’t have much anger left. He is glad. He meets Rishi who walks lost. Rishi asks what is Ayush doing in the bank. Ayush tells that he came with Karishma. He asks Rishi why is he upset. Rishi tells that the same drama is happening again. Ayush asks if Malishka is doubting him that Lakshmi is in his heart. He guesses it right.

Ayush asks Rishi the reason of the fight. Rishi calls Ayush really smart to guess this right, Malishka doubts him about Lakshmi. He is angry on Lakshmi that she always scolds him. He tells that he wants to patch up with Lakshmi, he really likes her and wants things fine. Ayush asks is he saying this for real. Rishi tells that Lakshmi thinks he is a villain, but he is a good person, he got a card for her and wrote all his feelings for her, he couldn’t give it to her before. Ayush asks him to put efforts when he likes Lakshmi, because she won’t know it herself. Rishi tells that he will give her the card, if he isn’t able to express it to her, but not today because she has a bad mood. Ayush and Shalu fall down. Ayush finds Rishi’s card. Shalu checks the I love you card and scolds Ayush for proposing her. Ayush tells that he will never propose her. Rishi calls him to know about the card. Ayush checks the card.

He gets mistaken that the card is for Lakshmi. He tells Shalu that this card is from Rishi for Lakshmi. Shalu gets glad to know this. She apologizes to Ayush. He tells that he liked to see the old Shalu. He asks her to help and make Rishi’s feelings reach Lakshmi on the valentines day. He tells that the card is a signal from fate, Lakshmi can read the card and meet Rishi, they can feel love for each other. Shalu doesn’t think so. He asks her to just try and trust him. The bank manager leaves for some work. Rishi meets Malishka. She hugs and kisses him. She checks the sorry card. Rishi tells that the sorry card is for Lakshmi. Malishka asks why didn’t he get a card for her, he can’t spoil her valentines. He tells that he had bought a card for her as well, but he lost it. He thinks Ayush has kept the card with him. He goes to ask Ayush. Shalu gives the card to Lakshmi from Rishi’s side.

Reviewed Rating for Bhagya Lakshmi 14th February 2022 Written Update Robbers attack: 4/5 This rating is solely based on the opinion of the writer. You may post your own take on the show in the comment section below.