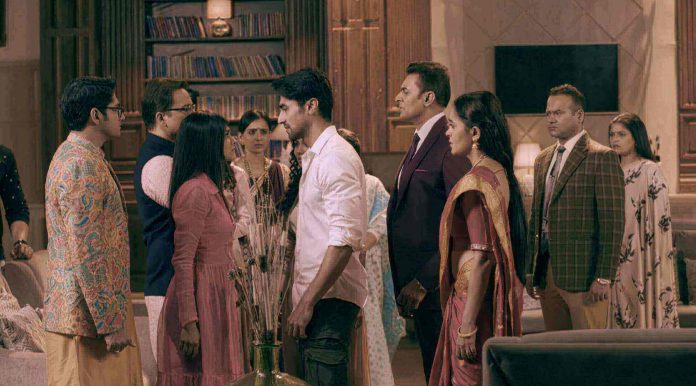 Kairav asks Birlas and Goenkas to ask Anisha that they never had done anything wrong. Anisha again cries and requests Kairav to not do this. Kairav asks Anisha to understand and says he has broken up with Anisha. Abhimanyu requests Kairav to see Anisha’s condition. He asks Kairav how he can see Anisha in pain if he loves her. Abhimanyu asks how is his love that he took a back step in the very first problem. He also asks Kairav why he started a relationship with Anisha, when he had to run away at last. Manish asks Abhimanyu to stop provoking Kairav as he has already troubled his family’s daughters.

Abhimanyu asks Manish why he brings him in between everything and scolds him. He asks Manish if it is fault that he truly loved his daughter Akshara. Manish tells Abhimanyu that firstly he played with Aarohi and Akshara’s heart and now provoking Kairav. He says Kairav won’t change his decision. Anand tells he doesn’t care about anyone’s relation. He also tells Manish that his arrival to Birla house had no point and asks him to leave, instead of creating a drama. Manish starts leaving with Goenkas. Kairav asks Birlas to not say anything to Anisha as it was not her fault. Abhimanyu grabs Kairav’s collar and asks what is the use of his concern. He asks Kairav to express and fight for his love.

Abhimanyu says his sister (Anisha) is also a human. He requests Kairav to not confuse Anisha and not play with her emotions. Manjiri asks Abhimanyu to leave Kairav. Abhimanyu says Akshara did the same thing with him. He says Akshara also sometimes said she loved him and sometimes said that she doesn’t love him. Abhimanyu asks Kairav what is his and Akshara’s problem and confusion in saying that you fell in love. He tells Kairav that he was stopping himself as he is Akshara’s brother. Akshara comes in between and grabs Abhimanyu’s collar. She asks Abhimanyu to stop and tears fall from her eyes. Akshara and Abhimanyu keep staring at each other. This shocks everyone.

Kairav asks Akshara to leave Abhimanyu’s collar. He takes Akshara with him and Goenkas. “Pehle Pyaar Ka Hai Pehla Gum”, plays in the background. In his thoughts, Abhimanyu asks Akshara won’t she even see him by turning back. In her thoughts Akshara tells Abhimanyu that she doesn’t like seeing him angry. Akshara turns and sees Abhimanyu consoling Anisha. Akshara wonders why she always gets pain and tears from Birla house and Birla family. Abhimanyu asks Birlas to not question him but Anisha. Mahima tells Abhimanyu that they don’t care about Anisha’s presence. Manjiri asks Mahima how she can be angry with her own daughter.

Anand says Anisha never gave anything else than problems to them. Abhimanyu tells Anand that a solution would come out if he would question the right person. He asks Anand to ask Anisha whatever he wants to ask her. Abhimanyu says Anisha can defend herself. Anand asks what is the need to do something that later a person would need to defend himself and herself. He says once again Anisha embarrassed them. Anand asks why Anisha returned back. Mahima says Anisha didn’t like her parents and broke up with them. She asks why Anisha returned and should have stayed with people whom she made a relationship with.

At Goenka Mansion, Manish stops Kairav. Anand says he was known as the biggest surgeon of the country. He says Anisha changed his identity in society as now people call him a father of a runaway daughter. Abhimanyu asks Anand till when he will scold Anisha for her old mistake. He requests Anand to forgive Anisha. Manjiri also requests Anand to give another chance to Anisha. Harshavardhan blames Goenkas for creating a drama in their house using Anisha. Anisha says Anand only cares about his powers. She asks Anand if he ever tried to ask her why she ran away. Anisha says only doctors are considered talented in the Birla family. She says the Birla family doesn’t care and thinks that someone could have a different dream.

Anisha says she ran away because she doesn’t want a measurable life and thus ran away. She says she ran away because she felt suffocated in Birla family and house. At Goenka Mansion, Kairav refuses to listen to Manish. This shocks everyone. At Birla House, on Mahima’s questioning, Anisha says she loves Kairav. Anisha says Kairav used to take care of her a lot but now got scared of Birlas and his own family. She asks what she should do as Kairav is sacrificing his love for his family. Kairav asks his family to not question him further. Stressed Anisha faints in Abhimanyu’s arms. Manish gets angry at Birlas for Kairav’s behavior. Akshara notices Manish holding his left arm in anger and pain.

Everyone at Birla house worries for an unconscious Anisha. Abhimanyu says Anisha is very and has already suffered a lot. He asks Manjiri how will Anisha handle all this. Manjiri asks Abhimanyu what about him and Akshara as being Anisha’s brother he took out his anger on Kairav (Akshara’s brother). Abhimanyu realizes his mistake. He sees Neil exercising his painful arm and recalls Mansih’s pain. Kairab goes to scream out his pain through his painting. He finds Akshara’s apology on it. Akshara recalls Abhimanyu and Kairav telling her about their relationship with Anisha. She also recalls Kairav sacrificing his love for his family. Akshara also recalls Abhimanyu’s anger and emotions for his sister and her.

Emotional Kairav reaches Akshara. Akshara reads the things in Naira’s diary for Kairav. In her diary, Naira explained to her children to keep their brother-sister relationship safe their whole life as it’s a blessing for them. Kairav hugs Akshara tightly from back. They apologize to each other. Akshara feels apologetic towards Kairav for not being able to support him in his love. Kairav asks Akshara to always be his emotional support. He tells her that he feels Naira’s presence being with her. Swarna and Suhasini relax seeing Akshara handling Kairav. Swaran decides to convince Manish to understand Kairav. Kairav requests Akshar to give him some time alone to handle himself. He tells Akshara that he would tell her everything later on as he also has to talk to Manish.

Akshara asks Kairav to do whatever he feels like and assures him that nobody would disturb him. She also asks Kairav to come to her whenever he feels like talking. Akshara cleans Kairav’s glasses like Vansh does always. She gives Naira’s dairy to him saying that he needs it the most this time. Kaira tightly hugs Naira’s dairy. Before leaving Kairav tells Akshara that not “her Abhimanyu” but Anisha’s brother grabbed his collar. Akshara tells whoever grabbed his collar didn’t do right. With teary eyes, Akshara sees Aarohi standing nearby and hearing her and Kairav’s conversation. Kairav leaves telling Akshara that a person’s reaction doesn’t come out good in bad situations.

Akshara plays guitar in anger. She recalls whatever happened at Birla house between Goenkas and Birlas. She sends a message to Abhimanyu’s which rings near her. She feels Abhimanyu’s presence nearby. Akshara turns and sees Abhimanyu hanging on her window. Abhimanyu tells Akshara that he observed pain in Manish’s arm. He gives Akshara a medicine and tests prescriptions for Manish. Akshara takes them and keeps them aside. She asks Abhimanyu if Manish is suffering through something serious. Abhimanyu tells Akshara that he can clearly say anything after the test results come out. He also tells Akshara that they need to be careful as Manish is going through a lot of stress. Akshara says she will ask Manish to go through the tests he prescribed.

She asks Abhimanyu to come inside as he may fall. Abhimanyu leaves saying that he needs to leave. Akshara wonders why she didn’t stop Abhimanyu and hugged him. Abhimanyu returns to Akshara, shocking her. In the next episode, Akshara and Abhimanyu will be seen hugging each other tightly. Abhimanyu will hear Aarohi’s bracelet sound and gets to know that she is keeping a watch on him and Akshara. He will say good doctors are very honest and that’s why can’t become a good spy. Aarohi will come in front and ask Akshara what Abhimanyu is doing here. Akshara will tell Aarohi that she and Abhimanyu got very angry with each other during Birlas and Goenkas’ argument and that’s why Abhimanyu came to meet her. Aarohi will say that Manish is also very angry. She will ask Abhimanyu and Akshara, if she should call Manish in front of them. Abhimanyu will confidently ask Aarohi to call Manish. Aarohi will shout “Bade Papa”. Akshara will feel tense.

Reviewed Rating for Yeh Rishta 14th February 2022 Written Update Tussle of love: 4/5 This rating is solely based on the opinion of the writer. You may post your own take on the show in the comment section below.