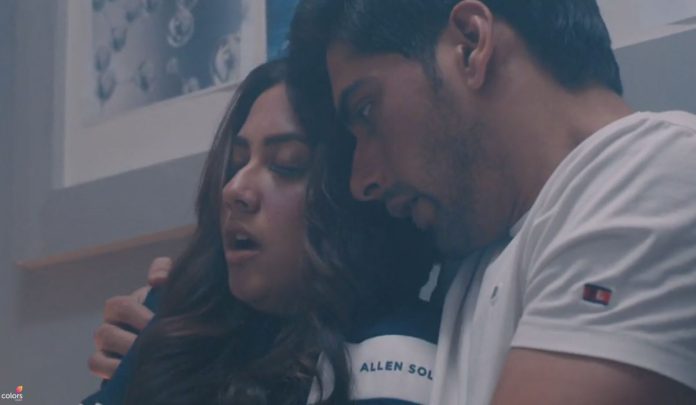 Fanaa 16th February 2022 Written Update Pakhi Ishaan back At night, Agastya goes inside Ayesha’s ward. He tells sleeping Ayesha that the meaning of her name is life. Agastya also tells Ayesha that her life got in danger because of him today. He apologizes to sleeping Ayesha. Agastya tells Ayesha that his life is in danger since her doctor friend Ishaan entered his life. He says how can he let Ishaan snatch his life (Pakhi) from him. Agastya says to Ayesha that he already knew that Ishaan will save her. Agastya further says Ishaan may be a bad person but is a very good doctor.

Ayesha wakes up when Aagstya kisses her forehead. She asks Agastya if he is a new doctor. Agastya asks Ayesha to consider him as her new friend. He assures Ayesha that he would soon bring a new machine through which she would never face breathing issues in future. Agastya tells Aayesha that he understands that hospital is a very irritating place. Ayesha asks Agastya if he also stayed in the hospital. Agastya recalls his time in hospital and how Pakhi made him smile. He tells Ayesha that he spent many months in the hospital as at that time his life was in danger too.

Shanya shows Pakhi a dance video. She sees Pakhi sad and in tears. Shanya asks Pakhi if she is crying. Pakhi tells Shanya that she is a little stressed about work. She asks Shanaya to not tell anyone about it. Shanya asks Pakhi if she really has only work stress. Pakhi says yes. Shanya hugs Pakhi and asks her to tell her if she will be in a big problem and not take stress. She tells Pakhi that she will solve her problem in a wink as she doesn’t like seeing her in tension. Pakhi says okay and asks Shanaya to let her change. She once again calls Agastya. Yug tells Agastya that Pakhi is again calling him. Agastya tells Yug that he is working on an important house project. Agastya is seen busy setting up a toy house. He asks Yug to let Pakhi realize that his love for her is so true.

Agastya tells Yug that Pakhi may realize her love for him (Agastya), if he avoids her for some time. Pakhi grows more stressed and decides to search Agastya. Before Yug could say anything Agastya tells him that he has already sent grandmother and Naveli outside the house and gave leave to all the servants as he already knew that Pakhi would come to his house. Agastya tells Yug that today no one can come in between him and Pakhi. Yug tells Agastya that he won’t let anyone come in between him and Pakhi. He says he can go and kill Ishaan. Yug says according to him Ishaan would surely return to Pakhi as he isn’t like other boys. Agastya reminds Yug that their hospital’s second plan hasn’t started yet.

He asks Yug to start their hospital’s second plan. Yug leaves to follow Agastya’s orders. Agastya desperately waits for Pakhi to get closer to her. He hides and dances like a mad person. Agastya opens the door. Stressed Pakhi comes inside. She asks Agastya why he wasn’t picking up her calls. Agastya apologizes to Pakhi and tells her that his phone was on silent and he didn’t get to know about her calls. Pakhi tells Agastya that she was thinking of spending Valentine’s day with Ishaan thinking that everything got alright between them. She further tells Agastya that everything messed up as Ishaan thinks that she tried killing his patient.

Pakhi tells Agastya that it was all a mistake and misunderstanding between her and Ishaan. She says Ishaan isn’t believing her and doesn’t want to talk to her or see her face. Pakhi tells Agastya that everything has got complicated between her and Ishaan. She says she has a feeling that Ishaan has started to hate her. Agastya asks Pakhi to relax and makes her sit. Pakhi tells Agastya everything that happened in the hospital. She says that Ishaan thinks that she is lying to hide her mistake. Agastya asks Pakhi how can Ishaan have such a doubt on her. He reminds Pakhi that she told him that Ishaan is trying to hide something from her. Agastya says he followed Ishaan and saw him walking on the streets of sector 17.

Agastya tells Pakhi that sector 17 is related to criminal activity. He tells Pakhi that when he questioned Ishaan, he remained quiet and had no answer. Agastya tries to prove Ishaan bad in Pakhi’s eyes and manipulate her against Ishaan. He gives Ishaan’s id card to Pakhi and continuously tries to make her see Ishaan as a problematic and evil person. Pakhi tells Agastya that she is sure Ishaan really loves her. Agastya gets angry at Pakhi. He asks her to do whatever she wants to as she can’t see the universe giving her hints/signs against Ishaan. Agastya tells Pakhi that she is continuously ignoring the universe’s signs.

Seeing Pakhi’s vulnerable condition, he apologizes to Pakhi for getting rude with her. He tells her that he will support her each and every decision as he will always protect her from dangers. Agastya asks Pakhi to take her decision carefully. He repeats all the proofs against Ishaan and tries to pollute Pakhi’s mind. Pakhi recalls every proof against Ishaan. Agastya leaves Pakhi in confusion. He happily dances, hearing Pakhi saying that she and Ishaan may not be meant for each other. Pakhi gets shocked seeing Agastya happily dancing. She gives Agastya a questioning glare. Agastya tells Pakhi that being her true friend, he can be happy for her. He tells Pakhi that she doesn’t deserve Ishaan and Ishaan isn’t her true love.

Agastya says Pakhi can never be alone till he is alive. He says Pakhi won’t ever be able to return to her mistake, Ishaan. Agastya says it’s time to end Pakhi’s mistake, Ishaan, forever. At the Trinity Hospital, Yug threatens a ward boy to follow his evil orders. Ward boy tells Yug how to kill someone in a cold chamber. Agastya thinks how can someone doubt Pakhi as he won’t believe even God above Pakhi. Pakhi apologizes to the universe for ignoring his/her signs for a long time. She requests the universe to give her a last sign if Ishaan is really the wrong person for her. Electricity goes off at Agastya’s home and secret room. He wonders how he will keep a watch on Pakhi now.

Driver tells Pakhi that he is taking another turn as the way ahead is closed. Pakhi says okay and the driver takes another way. Ward boy tells Yug that Ishaan always checks stock in the cold chamber after his shift and then leaves. Yug says Ishaan won’t be able to go outside from the cold chamber today. Pakhi realizes that she is near Ishaan’s hospital. She thinks what sign is the universe giving her. Pakhi decides to not ignore the universe’s sign this time. She goes inside the Trinity hospital. Yug sets the cold chambe’s temperature at -10°C and threatens the ward boy to break the temperature setting box, when Ishaan goes inside the cold chamber. Ayesha tells Sister Phiona about her new friend’s arrival.

Agastya tells Yug about the electricity issue at his house, due to which he can keep a watch on Pakhi. He asks Yug to come back. Ishaan angrily asks Pakhi to go outside as she will not be able to tolerate the cold chamber’s temperature. Pakhi asks Ishaan to not show attitude to her as she didn’t follow him to apologize to him. She tells Ishaan that she didn’t lie to him. Electricity returns back to Agastya’s home. Agastya’s secret room monitors take a little time to restart. He feels happy when Yug tells him that Ishaan will surely die till the next morning. Pakhi explains to Ishaan that a nurse came and told her that Ayesha won’t get a problem by removing the oxygen mask for 5 minutes.

Pakhi’s condition worsens. Yug tells Agastya that the ward boy told his phone’s battery can end any time. Agastya asks Yug to save Pakhi. Yug says okay boss. Agastya runs somewhere. Ishaan asks Pakhi why she came behind him. Pakhi tells Ishaan she came behind him because she loves him a lot. Angry Ishaan tells Pakhi that she got stuck with her. Pakhi tells Ishaan that she has been stuck with him for whole life. She tells Ishaan that he doesn’t trust her a bit. Ishaan apologizes to Pakhi holding his ears. Both Pakhi and Ishaan’s condition worsens. Agastya is seen on his way to Trinity hospital. He tells Yug on call that nothing is impossible. Agastya tells Yug that he will kill him if something happens to Pakhi.

Ishaan says to Pakhi that he wishes that he would have died alone. Pakhi asks Ishaan to not talk like this. Agastya tries to reach Pakhi as soon as possible. Pakhi and Ishaan hug each other. Pakhi says to Ishaan that they should promise each other that they would always trust each other and won’t let anything or anyone come between them, if they get outside alive/ get saved. Ishaan promises Pakhi. Agastya reaches the hospital and runs towards the cold chamber.

Reviewed Rating for Fanaa 16th February 2022 Written Update Pakhi Ishaan back: 3/5 This rating is solely based on the opinion of the writer. You may post your own take on the show in the comment section below.