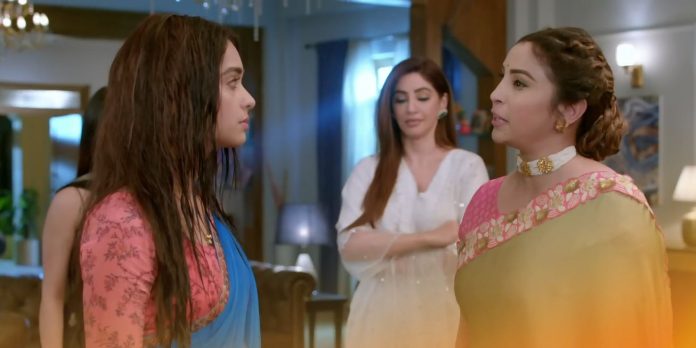 Kumkum Bhagya 17th February 2022 Written Update Prachi revolts Pallavi and Aaliya summon Prachi downstairs. Prachi doesn’t guess their plans. She Pallavi shocks Prachi by pouring the water over her head and wiping off her Kumkum. She tells that just Rhea has the right on Ranbir’s Kumkum, she deserves it and nobody else. She tells Prachi that only Rhea will be applying the Kumkum of Ranbir’s name, so she has put the water and washed off the sindoor from her hairline. Prachi is shell shocked by Pallavi’s sudden outburst. She didn’t expect Pallavi to wipe off the Kumkum without considering that its of Ranbir’s name and signifies his safety. She realizes that Pallavi loves Rhea a lot and is just thinking of Rhea than Ranbir. Prachi doesn’t give up to Pallavi post the torturing incident. She tells that she will fight for her Kumkum and snatch Ranbir from Rhea. She swears to not give up her Kumkum and win Ranbir back. Prachi vows with the strength and confidence of a righteous wife. What tough times will Prachi bring for Kohlis now after their evil move? Keep reading.

Aaliya knocks the door and asks Prachi is she worried. Prachi tells that she is okay. Aaliya tells that Prachi and the room look messy. Prachi asks her how did she come. Prachi tells that the pictures are messy, not her. She adds that she was just trashing the pictures of Ranbir and Rhea’s marriage. She wants to stop the negativity from spreading. Aaliya taunts her. She asks Prachi to come and talk to Pallavi. Prachi tells that Pallavi would like to teach her a lesson. She threatens Aaliya that she will teach a lesson to the elders if she doesn’t like the lesson taught by them. She asks Aaliya to witness the drama which started because of her. Aaliya knows that Pallavi will be teaching a lesson to Prachi well. Prachi looks for Pallavi, who shocks her by pouring the water on her head. Prachi screams.

Vikram, Dida and Shahana reach there. Vikram asks Pallavi why did she do this. Pallavi tells that her tolerance is exhausted, she can’t tolerate Prachi more, Prachi is trying to burn Ranbir’s happiness. She tells them that Prachi has torn Ranbir and Rhea’s marriage photos, which were their memories. She lectures Prachi. Prachi asks Pallavi did she give this punishment for tearing the pictures. She admits that she did a mistake, Pallavi felt bad that she destroyed the memories, but she will rectify the mistake by arranging a wedding shoot for Ranbir and Rhea. She tells that she will get the original pictures to her if she wants. She asks Pallavi can she return her exact happiness back.

She tells that whatever happened with Siddharth was a misunderstanding, it should have not happened with any bahu or daughter, her character was assassinated that day, she got insulted in her own house. She asks Pallavi if she can return her respect and her right image in Ranbir’s eyes. She wants to know if Pallavi can return her old life. Vikram knows that its too late now, but he still wants to apologize to Prachi. He lessens his guilt by apologizing to her. He regrets that he couldn’t become a good father in law, he has failed in his role. He tells that the matter went out of hands until he came to know about the misunderstanding. He blames himself for the mess. He asks Prachi to forgive him if possible.

Pallavi tells that the Kumkum got washed off, it has a rightful place to get adorned. She asks how can the same Kumkum get adorned in Prachi’s hairline if Ranbir has filled it in Rhea’s hairline. She tells that Rhea deserves the Kumkum of Ranbir’s name, two women can’t share it. She tells that she has washed off the Kumkum from Prachi’s hairline. She asks Prachi to not call herself as Ranbir’s wife again, because Rhea is his wife. She tells that Ranbir and Rhea have gone on honeymoon to complete their marriage. Vikram feels sorry for Prachi. Pallavi tells Prachi that she isn’t sorry, Prachi can get out of the house if she wants this to not happen again. She adds that Ranbir and Rhea will unite after completing their relation. She asks Prachi to thank her that she has freed her from living a dual life. She wants Prachi to promise her to never apply the Kumkum again. She wishes to get rid of Prachi. She tells that they will stay happily in their house.

Shahana asks Pallavi to stop humiliating Prachi. Prachi tells hat Pallavi is a good mother. Pallavi doesn’t want a certificate from Prachi. Prachi hugs Shahana. She consoles her. She tells that she won’t prove that she is the bahu of the house, she is the wife of Ranbir, she will make Pallavi certify this to the world. She challenges Pallavi. She tells that he will make Pallavi accept her. She asserts that Rhea is just her sister, not her Sautan. Pallavi asks Prachi not to dream. Prachi replies that her dreams always get fulfilled. Vikram gets disappointed with Pallavi. Aaliya asks Pallavi why is Vikram saying so. Meanwhile, Rhea orders the Inspector to free her from the lockup. Inspector asks her to stop commanding her.

He tells her that Prachi will not change her ways. He feels upset that Pallavi crossed her limits. He warns her to not do anything wrong with Prachi. He tells that he will support Prachi from now on. Vikram leaves the room in anger. Aaliya comes there to tell Pallavi that Prachi is manipulating Vikram. Rhea tells Ranbir that Prachi would know that they didn’t celebrate their first night, she would be happy and laugh on her. Ranbir tells that he is her husband, but they need help. Rhea tells that she has to go home but can’t take Prachi’s help, Prachi would say that she has won the challenge. Ranbir asks her to understand that Prachi would be helping them. Rhea calms down. He tells that once Pallavi knows about their arrest, she will arrest a lawyer and send help. He asks her to relax and think of going home. He is happy that Prachi has stopped their honeymoon and made him win.

Reviewed Rating for Kumkum Bhagya 17th February 2022 Written Update Prachi revolts: 4/5 This rating is solely based on the opinion of the writer. You may post your own take on the show in the comment section below.