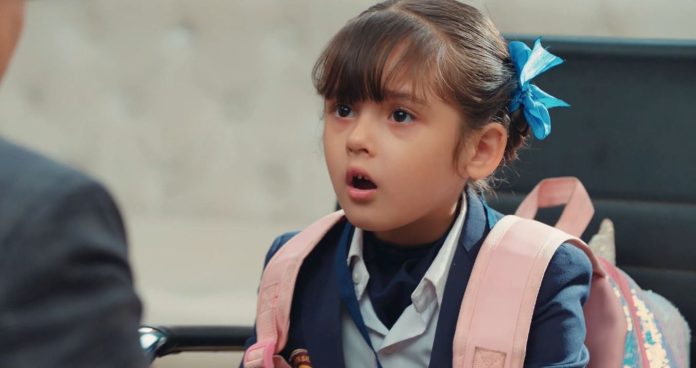 Yeh Hai Chahatein 16th February 2022 Written Update Troubled Ruhi Prisha, Rudra and Bunty are seen waiting for the disloyal peon to come outside of the bank. Yuvraj wonders what are Prisha and Rudra doing together outside the bank. He thinks to let Rudra spend his last moments with Prisha. He thinks of sending his location to his hit man. Disloyal peon sits on his bike with a big bag around his shoulders. Prisha, Rudra and Bunty follow the peon. Yuvraj feels irritated and thinks about what is happening. He follows Rudra and Prisha. At school, Monty laughs seeing Ruhi going towards the boy’s washroom. Ruhi goes inside and starts cleaning the curd on her school uniform.

She sees the principal in the mirror, closes her eyes and screams. Hearing Ruhi’s scream, Monty laughs outside. Principal gets shocked seeing Ruhi in the boy’s washroom. Rudra and Prisha ask Bunty to follow the disloyal peon by driving fast. They wonder why Bunty is driving slow. Bunty makes excuses for traffic rules and fines. Rudra takes the driving seat from Bunty. He loses the disloyal peon initially but finds him later. At school, the Principal scolds Ruhi for entering the boy’s washroom. Ruhi apologizes to the principal and tells him that someone told that the Girls washroom is nearby. She also shows the Girl’s washroom sign to the principal. Principal gets shocked and Monty gets scared.

Principal tells Ruhi that someone tried to trouble her by changing washroom signs. He calls peon Rajesh and asks him who changed washroom signs. Rajesh says he doesn’t know. Principal asks Rajesh to bring Class 1 A students in front of him. All the students arrive and the principal asks who did the washroom prank with Ruhi. He scolds kids for behaving badly with other classmates. He says he will anyhow find out who played a prank on Ruhi. Principal says after knowing about the real culprit, he will call his/her parents and suspend him/her. He asks the culprit to accept his mistake beforehand only. As everyone remains quiet, the Principal asks Ruhi who sent her to the wrong washroom.

He asks Ruhi to not be scared of anyone. Ruhi points towards Monty. On the other hand, Rudra keeps following disloyal peon. Prisha, Rudra and Bunty reach a house following the disloyal peon. Yuvraj sends the location to his hit man. Rudra, Prisha and Bunty enter the house where the disloyal peon entered. At school, Ruhi tells the Principal that she doesn’t remember who misled her. Principal tells Ruhi that he understands that she is saving the kid who misled her. He tells Ruhi that by saving the culprit, the culprit won’t change and she can face bigger trouble in future. Principal warns the kids of playing any wrong prank in future.

Rudra leaves to follow the disloyal peon asking Prisha to take care of Bunty and the bag. Rudra grabs the disloyal peon in between the road. He again asks the disloyal peon to reveal his partner’s name. A truck comes towards them. Prisha and Bunty hear Rudra’s scream. Bunty sends Prisha to see Rudra. Prisha runs to Rudra. She tries to wake up Rudra. Rudra wakes and says he is fine. Prisha asks Rudra where the disloyal peon (Pandey)is. Rudra recalls how Pandey saved him from a big accident and got himself badly injured. Prisha and Rudra find Pandey badly injured. Prisha tells Rudra that they need to take Pandey to hospital as his nerves are running slow. Rudra says he doesn’t have that much time. He assures Pandey that he won’t let anything happen to him and requests him to tell him his partner’s name.

Bunty walks towards Prisha, Rudra and Pandey. Rudra asks Prisha and Bunty to call an ambulance and police. Rudra again assures Pandey that no case would be filed on him and requests him to tell his partner’s name involved in the scholarship scam. He tells Pandey that he made Khurana school for his brother Rajeev and doesn’t want his brother’s name to get ruined. Pandey points upwards and dies saying “Ba/Bu”. Prisha tells Rudra that Pandey is dead. This shocks everyone. At school, Ruhi searches for Prisha in her cabin. She wonders where Prisha went. Ruhi goes to the principal’s office and asks about Prisha’s whereabouts.

Principal gets shocked and surprised seeing Ruhi and Saaransh’s bond. Ruhi tells Saaransh that her mother and Rudra aren’t picking up the call. She asks Saaransh if he could pick her up from the school. Saaransh agrees to pick up Ruhi and asks her to wait for him. Suddenly Ruhi’s stomach growls, and the Principal silently laughs hearing it. A little embarrassed, Ruhi requests Saaransh to bring something to eat for her as she is hungry. Saaransh laughs and agrees. Vaijayanti overhears Saaransh and Ruhi’s conversation. She worries thinking that Prisha and Ruhi are in Delhi and maybe Saaransh knows about Prisha. Vaijayanti grows insecure thinking that Prisha wants to return to their lives. She decides to know what is happening.

Ruhi tells her Principal that Rudra’s friend Saaransh is coming to pick her up. Principal tells Ruhi that Saaransh is Rudra’s only son (only child). This information shocks Ruhi. In the next episode, Prisha will tell an upset Rudra that they will find out the truth about the scholarship scam. Angry Rudra will ask Prisha to stop her good human being drama and leave. He will push her aside, making her feel bad. Prisha will ask Peon Rajesh about Ruhi’s whereabouts. Rajesh will inform Ruhi that her mother is searching for her. Ruhi will be seen having lunch with Saaransh inside a classroom. Saaransh will say now he will meet Ruhi’s mother. Vaijayanti and Saaransh will be seen sitting in a car. Saaransh and Prisha will be seen near each other. Prisha will turn around hearing Vaijayanti’s voice calling Saaransh.

Reviewed Rating for Yeh Hai Chahatein 16th February 2022 Written Update Troubled Ruhi: 3/5 This rating is solely based on the opinion of the writer. You may post your own take on the show in the comment section below.