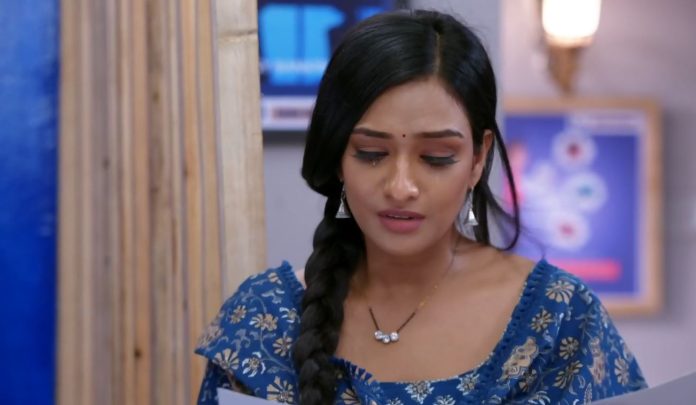 Bhagya Lakshmi 18th February 2022 Written Update Final time Lakshmi hides from the goons and locks her inside a room. She goes to the balcony to get some network. When she succeeds in finding network, she makes a call to the police. She fails to connect to the police. She posts a video on the social media. She appeals to those watching the video to please inform the police about them. She tells that the people are stuck as hostages in the bank, because of the robbers gang. She asks them for the earliest help. Rishi finds the goon going towards Lakshmi, and stops him again. Rishi and Lakshmi get caught. Goons threaten of killing them. They ask Rishi and Lakshmi to think of their dear ones before they die. Lakshmi cries. Rishi and Lakshmi close their eyes. The goons shoot at them. Neelam gets worried about the threat on Rishi. A cop makes an entry in the bank to rescue the hostages.

Earlier in the show, a worried Virender calls Rishi, Ayush and Karishma. He feels strange that their phones are switched off. Dadi tells that its not possible that their phones are off all the time. Rishi and Lakshmi are taken by the goons. Rishi asks Lakshmi to run quickly. He stops the goons from going after Lakshmi. He lies that he has both the phones. Lakshmi tries to get the network to call the police. Manager tells that Lakshmi would have done something like blackmailing Rishi. Malishka tells that Lakshmi isn’t such a girl.

Shipra likes it that Malishka respects her boyfriend’s wife. Malishka angrily throws the locker keys down the window. She tells that she isn’t scared of the gun. Shipra slaps her and takes her to the chief. Rishi gets chased by the goons. Lakshmi is also caught at the same time. Shipra tells the chief that she couldn’t access the locker about of Malishka. Shipra and Malishka get into a fight. Lakshmi doesn’t find network in her phone. She finds a landline, but fails to call the police. The chief loses his mind and points the gun at Malishka’s head.

Lakshmi tries to find network and runs to other room. She finally finds a window and opens it. She searches for network. She thinks to make a video and send it. She records the video and informs about the goons making the people hostage and robbing the bank. Rishi looks for Lakshmi. He is glad that she isn’t around. He gets caught by the goon. Even Lakshmi gets caught. The goon asks her to get scared of him, he will shoot her and won’t think twice. She tells him that he will be soon caught. He tells that she will be dying now, it will be much fun to kill her. Other goon also scolds Rishi for acting smart. Rishi and Lakshmi close eyes. Lakshmi thinks of her dad when the goon asks her to think of the person she loves the most. Same way, Rishi thinks of Neelam and Virender. Lakshmi and Rishi then think of each other, and realize their feelings.

Neelam prays for her son at home. Everyone is shocked to hear a gun shot. Rishi and Lakshmi worry for each other, and fight the goons. They try to run to each other. They succeed in running outside. Neelam fears for Rishi. She quickly lights the diya. She tells Virender that the diya should always light, its of Rishi’s name, it’s a bad omen if it doesn’t light. Virender asks her to calm down. Dadi receives her friend’s call. She is informed that Lakshmi is coming on the news channels, she is caught by the robbers at the bank. Dadi recalls the threat on Rishi. She tells Neelam and Virender that Rishi has gone to the bank and its under attack. Virender plays the news. The chief spares Malishka. He tells that its his style to give her a last chance. He asks her to close eyes and think of the person she loves the most. Karishma asks him to leave Malishka. Virender and Neelam get to see Lakshmi’s video on the news channel. They get worried.

Inspector Rakesh Singh is appointed for this case. Rakesh’s entry is seen. The news reporter praises Rakesh. Rakesh proceeds to the bank. He is committed to his work. He doesn’t let any minister’s rally stop his jeep. Malishka stares at the chief and shows that she isn’t scared. Shalu stops the chief. She tells that she will go and get the keys. Ayush stops Shalu from risking her life. Ayush snatches the gun from the chief and gets him at the gun point. Ayush asks Karishma to go out and inform the police. He wants everyone to run outside, he will get Rishi and Lakshmi with him. He gets caught by the goons, while Karishma and others run outside the bank. Malishka and Shalu are still stuck. The chief beats up Ayush. Karishma worries for her son. Manager asks her to stay outside and try to help those stuck inside.

Chief asks Shipra to take Malishka and get the keys. Rishi is brought there. Rishi hugs Malishka and protects her. Shipra asks Rishi why is he appearing loving towards Malishka now when he was acting lovey dovey with his wife. Malishka argues with Shipra. Rishi tells that he will go and get the keys. The chief tells that Malishka will get the keys because she has thrown it. Rishi can’t risk her life. He hugs Malishka. Lakshmi watches this from far and sheds tears. Shalu goes to see Lakshmi. Malishka is taken by Shipra. Rishi cares for Ayush seeing his wounds. The chief asks the goons to fill the money in the bags and leave, Lakshmi would be hidden, but won’t be able to do anything against them. Shalu hugs Lakshmi and consoles her. The media reaches there to capture the bank robbery.

The reporter praises Lakshmi’s bravery, because she risked her life to save the people. Lakshmi cries a lot. She tells Shalu that she is feeling bad seeing Rishi with Malishka, she hates him but isn’t able to forget him. Shalu consoles her. She tells that its natural to feel so, because Lakshmi truly loved Rishi, she shouldn’t be so upset, their heart doesn’t listen to them. Neelam and Virender rush to the bank to save Rishi. They get stuck in the traffic jam. They learn about the minister’s rally. They plead to get them go ahead to save their son from the bank robbers. They get permission and go ahead. Rishi tells Ayush that Neelam would be too worried for him. He reveals that Lakshmi is hiding somewhere. Malishka and Shipra get the keys. The chief asks Shipra to come with him. He tells that it will be a breaking news when they rob the bank. He checks the news. He finds Lakshmi’s video. Rishi feels proud of Lakshmi, while the chief goes fuming in anger.

Reviewed Rating for Bhagya Lakshmi 18th February 2022 Written Update Final time: 4/5 This rating is solely based on the opinion of the writer. You may post your own take on the show in the comment section below.