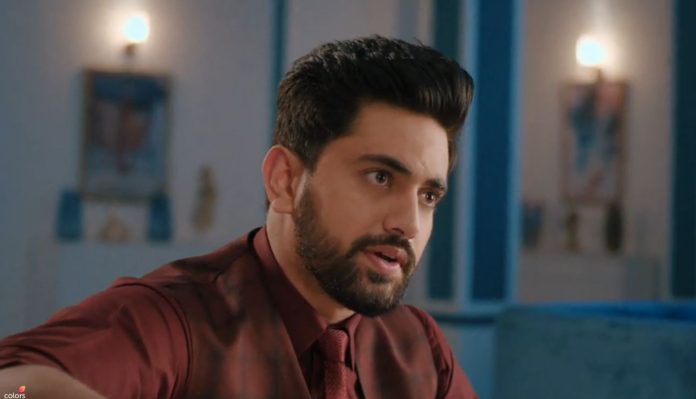 Fanaa 17th February 2022 Written Update Agastya new plan Pakhi and Ishaan’s condition worsens in the cold chamber. Ishaan tells Pakhi that he knows only one thing. He takes Pakhi’s hand in his hand and asks her if she will marry him. Agastya reaches outside the cold chamber and screams Pakhi’s name. Inside Pakhi says yes for marriage to Ishaan. Both of them happily and tightly hug each other. Agastya beats the cold chamber’s door with his hand, legs and shoulders. He runs and brings two ward boys towards the cold chamber and tells them that someone is stuck inside. Agastya also asks the ward boys to bring help or either break the door. One of the ward boys tells Agastya that it’s a digital lock and will get opened through the broken box only.

Agastya tries to join the broken box wires but gets electric shocks. Ward boys go to bring an electrician. Pakhi’s health worsens inside the cold chamber. Ishaan tries to handle and calm Pakhi. Even after getting regular shocks, Agastya keeps on trying to join the wires. He thinks Pakhi will die inside if he fails to join the wires. Ishaan caresses Pakhi and asks her to open her eyes. Both Pakhi and Ishaan faint in each other’s arms. Agastya fixes the cold chamber’s temperature box and increases its temperature to 5°C. He opens the chamber’s door and runs inside.

Agastya picks Pakhi in his arms and runs outside. Two ward boys take Ishaan outside. After some time, Aagastya enters a ward where Pakhi and Ishaan are admitted. He runs to Pakhi. Ishaan asks Agastya to relax as Pakhi is fine now. Pakhi opens her eyes and tries getting up. Agastya asks Pakhi to not get up. Ishaan asks Pakhi to not be a superwoman, keep lying and rest. Pakhi says she is fine and sits straight. Ishaan says he is wondering how he and Pakhi got locked inside the cold chamber. He asks Agastya what he was doing in the hospital. Agastya lies that he came to talk to Ishaan regarding Pakhi and the ward boy told him that they got locked inside the cold chamber.

Ishaan thanks Agastya for saving his life and his jaan Pakhi. While Pakhi smiles, getting shy, Agastya feels angry but doesn’t show his anger. Agastya gets shocked, when Ishaan says it’s good that came a little late, otherwise that wouldn’t have happened between him and Pakhi. He asks Pakhi if she hasn’t changed her decision. Pakhi signs no. Agastya asks Ishaan and Pakhi which decision they are talking about. Pakhi tells Agastya that she and Ishaan have sorted out their differences. Ishaan tells Agastya that he proposed Pakhi for marriage thinking that he is going to die. Scared Aagastya immediately asks Pakhi what was her reply to Ishaan’s marriage proposal.

Ishaan tells Agastya that Pakhi said yes to his marriage proposal. He sarcastically says that now he is scared thinking about how he will spend his whole life with just one girl. Pakhi asks Ishaan to not act oversmart as she is the one who got stuck for lifetime with him. Aagastya feels bad and angry hearing all this. Pakhi and Ishaan get shocked when sad Agastya asks Pakhi where she has got stuck. Seeing Pakhi and Ishaan’s shocked expressions, Agastya changes his tone and asks Pakhi to tolerate Ishaan forever now. Ishaan sarcastically asks Pakhi to be happy as he chose her leaving half delhi girls. Agastya controls his anger somehow.

Pakhi tells Agastya that she said yes to Ishaan’s marriage proposal at that time, because she felt it was the right decision. Agastya gets teary eyes in defeat. She tells Agastya that she is ready to face any challenges which may come in her and Ishaan’s love. Pakhi says she is even ready to walk barefoot on nails for her love. To make Agastya believe her words, Pakhi walks barefoot towards the nail board. Agastya wipes his tears and turns back. He runs towards Pakhi, jumps and keeps his hand in between Pakhi and the nail board. Pakhi gets worried for Agastya. She tells Agastya that it’s her love exam, so its pain should also be hers, not his. Pakhi asks Agastya for what exam/test he is giving.

Agastya feels good seeing Pakhi’s care for him. Pakhi ties a piece of her dupatta on Agastya’s wounds. Agastya asks Pakhi if she thought what he would have gone through if something would have happened to her. She makes Agastya stand. Pakhi tells Agastya that she could have borne nail pain but would not be able to bear the pain of separation from Ishaan. She tells Agastya that she won’t be able to be happy if he keeps hating Ishaan. Pakhi asks Agastya to understand that it was the universe’s sign that she suddenly reached Ishaan’s hospital and got trapped with him only in the cold chamber. She gets happy when Agastya tells her that he is happy in her happiness.

Pakhi thanks Agastya. She says how she will tell everyone at home. Agastya asks Pakhi to not worry as he would handle everything. Pakhi tells Agastya that he is the best. Later, Pakhi’s family gets shocked on knowing that Pakhi wants to marry Ishaan. Her aunt says that Ishaan’s family may need a woman to work at their home as there is no woman in their family. Pakhi’s mother asks Pakhi if Ishaan has a drinking habit. Agastya gives Ishaan’s guarantee to Pakhi’s family. Pakhi’s family feels relaxed and happy with Aagastya’s guarantee. Pakhi’s family decides to call Ishaan to have lunch with them. Agastya gets teary eyed seeing Pakhi and her family happy and ready to accept Ishaan.

Next morning, Ishaan takes Pakhi’s family’s blessings. Pakhi’s mother praises Ishaan’s values. Agastya thinks someone should learn to do drama from Ishaan. Ishaan’s father gives sweets to Pakhi’s mother. Agastya sees that Pakhi and Ishaan are secretly texting each other. Pakhi’s father finds insects in the sweets. Ishaan apologizes to Pakhi’s father and says that he didn’t know about this. Pakhi’s aunt speaks ill against Ishaan and Pakhi’s relationship inception. Ishaan’s father also apologizes. Agastya asks everyone to relax saying that contamination happens in big food chains. Pakhi asks Ishaan’s family to not be sorry as it wasn’t their fault.

Shanaya says she has many followers on social media and will teach a good lesson to Chainaram sweets sellers. Ishaan smiles at Shanaya’s kiddish behavior. Agastya says Ishaan’s big heart is important at present. He says Ishaan kept many girls in his heart in college. Agastya also says that being a doctor Ishaan has the habit of drinking cough syrup. He says Ishaan saved his engagement ring money by making a ring by marker on Pakhi’s finger. Everyone feels off with Aagastya’s tone. Pakhi asks Aagastya why he is scaring her parents. Ishaan glares at Agastya but smiles when Agastya tells everyone that he was joking. Ishaan asks Agastya to not worry as he would bring a real gold ring for Pakhi on their engagement day.

Panditji comes and scares everyone by saying that Ishaan and Pakhi’s life after marriage could be dangerous. Agastya smirks hearing all this. Ishaan asks for a solution from Pandit ji. Agastya asks if they should consider birth charts or horoscopes in 2022. Ishaan tells Pandit Ji that according to him it’s enough that he and Pakhi love each other a lot. Pakhi’s aunt tells Ishaan that stars know more than humans. Agastya asks Pakhi’s aunt to let Ishaan and Pakhi make their own decision for their life. He takes Ishaan aside with him and asks him to close his eyes and put his finger on any date on the calendar.

Ishaan says now he can officially hold Pakhi’s hands. This angers Agastya and he hurts himself with a corner nail. Pakhi gets worried for him and asks him to take care of himself. He gives Pakhi’s hand in Ishaan’s hand and turns to wipe his tears. At night, at his home, Agastya plays with his doll house project. He decides to let Pakhi and Ishaan marry each other. Agastya decides to make Pakhi kill Ishaan. He says Ishaan will get the punishment if Pakhi’s doings. Agastya makes Pakhi’s doll push Ishaan out of the doll house. Ishaan’s doll breaks. Agastya kisses Pakhi’s doll and keeps it besides his doll in the doll house and laughs madly.

Next morning, Agastya instructs his staff to prepare everything according to Pakhi’s father. He also asks Pakhi’s father to get marriage preparations done by his staff as he pleases. Pakhi’s father takes Agastya’s staff with him to make them understand work. Agastya thinks to let Pakhi’s father be happy now as he would get a big shock in Ishaan’s bachelor party in the evening. Pakhi is seen showing tantrums to Ishaan on video call for her lehenga color. She tells Ishaan that she feels that this time her choice is wrong. Agastya snatches the lehenga from Pakhi’s hand and tears it. This shocks everyone. Agastya asks Pakhi to correct her mistake, if she feels her choice is wrong. Everyone gets more shocked.

Agastya tells Pakhi that he would take her to a boutique and they will not come out of the boutique till she gets 100% sure. Ishaan feels irritated and disconnects Pakhi’s call, making excuses for another call. Agastya tells Pakhi’s mother that his grandmother said that she will give silver coins to all the guests from her side. He convinces Pakhi’s mother when she refuses to take such expensive gifts from him. Agastya also convinces Pakhi’s father and uncle to attend Ishaan’s bachelor party. He tells them that they would remember this bachelor’s party their lifetime.

Reviewed Rating for Fanaa 17th February 2022 Written Update Agastya new plan: 4/5 This rating is solely based on the opinion of the writer. You may post your own take on the show in the comment section below.