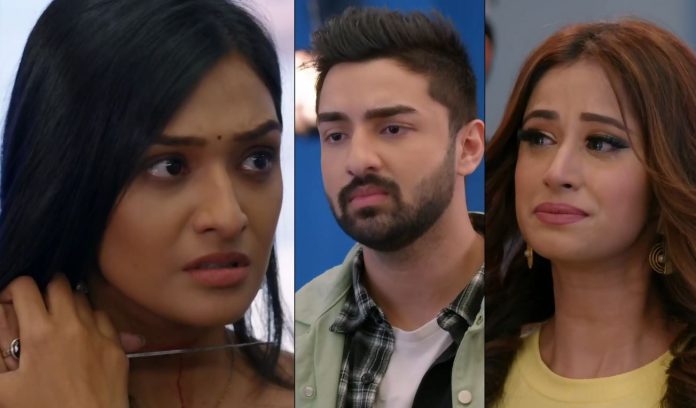 Bhagya Lakshmi 21st February 2022 Written Update Rishi’s true love Inspector Rakesh Singh tells Karishma that she is lucky to get saved from the robbers gang, those who are stuck inside are in grave danger. Karishma tells about her son Ayush. The robber chief tells Rishi and others that he will rob the special locker somehow, its really important for him and he will not go without completing his task. He adds that he will not move back from killing anything, he will kill one of them or all of them as needed. Ayush and Rishi worry for the loved ones. Lakshmi is caught by the robber, who keeps a knife at her neck and hurts her. Rishi asks him to leave Lakshmi.

He asks them not to touch her. Lakshmi’s neck bleeds. The robber chief asks Rishi to name the one he loves, he would be able to save just one of them. He asks Rishi to choose between Lakshmi and Malishka. He tells that both of his lovers are in danger, but he can save just one, if he doesn’t tell whom he loves the most, then both of them will lie. Malishka and Lakshmi cry in pain, while Rishi’s heart aches for them. Whom will Rishi choose? Rishi falls for Lakshmi, and names her to be saved first. Keep reading.

Earlier in the show, the reporter praises Lakshmi’s bravery, because she risked her life to save the people. Lakshmi cries a lot. She tells Shalu that she is feeling bad seeing Rishi with Malishka, she hates him but isn’t able to forget him. Shalu consoles her. She tells that its natural to feel so, because Lakshmi truly loved Rishi, she shouldn’t be so upset, their heart doesn’t listen to them. Neelam and Virender rush to the bank to save Rishi. They get stuck in the traffic jam. They learn about the minister’s rally. They plead to get them go ahead to save their son from the bank robbers. They get permission and go ahead. Rishi tells Ayush that Neelam would be too worried for him. He reveals that Lakshmi is hiding somewhere. Malishka and Shipra get the keys. The chief asks Shipra to come with him. He tells that it will be a breaking news when they rob the bank. He checks the news. He finds Lakshmi’s video. Rishi feels proud of Lakshmi, while the chief goes fuming in anger.

Rakesh prepares to get inside the bank. Karishma tells him that she was the hostage before, others were also running to come outside, but robbers caught the them back. She tells that she was lucky to come out of the bank. Manager and Karishma inform about Malishka and Ayush. Rakesh asks them about the robbers. Karishma tells that robbers said that they will not harm anyone, but take the gold and cash from the lockers. He adds that she has seen the robbers’ face. He tells that criminals don’t spare anyone who see their face. Karishma gets worried for Rishi, Ayush and Malishka. Rakesh asks manager to get the bank blue print. Manager reveals that she had tricked the robbers and gave them the wrong keys, instead the locker keys. She shows the real locker keys to them. The chief shouts Lakshmi’s name.

Shalu and Lakshmi get worried hearing the robbers shouting. Lakshmi tells Shalu that she had posted a video to take help from the social media. Shalu calls her brave. She asks Lakshmi not to worry, and come with her to Rishi and Ayush. She tells that robbers won’t harm them if they surrender, they will be in trouble if they try to hide and run. Rakesh tells that the robbers will realize the fake keys and then call them to negotiate to get the locker keys. Manager helps Rakesh with the bank blue print. The chief tells the truth to the people. He tells that he has to rob a special locker that has many diamonds, the locker belongs to the jeweller. He asks them to cooperate with him, else they all will die. He assures that he will not harm anyone if he gets whatever he wants.

The chief learns that the police has come outside. Rishi, Malishka and Ayush get happy hearing this. Media questions Rakesh about the rescue mission. Rakesh apologizes to the reporters. He asks them to get back, anything can happen if the criminals get triggered. Malishka asks for water. Rishi tells that he will get it. The goon asks Rishi to sit quiet. Rishi asks can’t he have water. He gets the water. The chief tells that police has come, now their incharge will call them. Shipra tries to open the locker room. The locker room doesn’t open by the key. Shipra realizes that they got fooled. She calls the chief and tells that the key isn’t the master key to access the lockers. She adds that Malishka is fooling them.

The chief finds a phone outside the door. He gets it to communicate with the police. Rakesh Singh speaks to the chief. He asks the chief why did he keep hostages. The chief tells that hostages are his insurance. They both challenge each other. Rakesh tells that he got to compete with an educated criminal after a long time. He asks him to surrender, else he will not spare him. The chief tells that Police should agree to his demands, else he will kill the hostages. He asks Rakesh to send the real locker keys. Rakesh refuses to compromise. The chief gets into an argument with Rakesh. Rakesh tells that he will never send the locker keys.

The chief tells that he will kill the innocent people one by one, and then Rakesh’s name will be maligned for not saving the people. He threatens Rakesh. He asks for the key. Rakesh tells that the manager doesn’t have any key. The chief is sure that the manager has the keys. He threatens of killing one person in 5 minutes. Rakesh gets stressed. Karishma is worried for Rishi, Ayush and Malishka. She asks Rakesh to do something fast to save them. Rakesh promises to save everyone’s lives. Malishka argues with Rishi for opening the couple joint account with Lakshmi. Rishi tells her about Yogesh, who didn’t know about Lakshmi and his separation, it was important for him to open a bank account to win rewards, so he had to open the account.

Malishka calls Rishi really a nice person. Ayush tells that Rishi will not let anything wrong happen with Lakshmi. Lakshmi is worried for Rishi. She tells Shalu that they will go to Rishi, who saved her and helped her in informing the police. She asks Shalu to sit in the cabin, and not come out. They soon get caught by Shipra. Shipra drags Lakshmi to the chief. The chief catches Lakshmi by her hair, and rebukes her for informing the world about the robbery. Rishi warns him to leave Lakshmi. He angrily beats up the chief.

Shipra catches Lakshmi at the knifepoint. Rishi begs her to spare Lakshmi. Rishi and Lakshmi cry seeing each other with concern, while their eyelock makes Malishka cry in sorrow and anger. Virender and Neelam reach the bank. They ask for Rishi. They meet Karishma, and learn that both Rishi and Ayush are inside the bank. Neelam gets afraid for Rishi. News reporter sees Virender and goes to take bytes. The chief asks Rishi to choose who he loves the most, who he wants to save, Lakshmi or Malishka. He tells that just his lover will be alive now. Rishi falls into a dilemma.

Reviewed Rating for Bhagya Lakshmi 21st February 2022 Written Update Rishi’s true love: 4/5 This rating is solely based on the opinion of the writer. You may post your own take on the show in the comment section below.