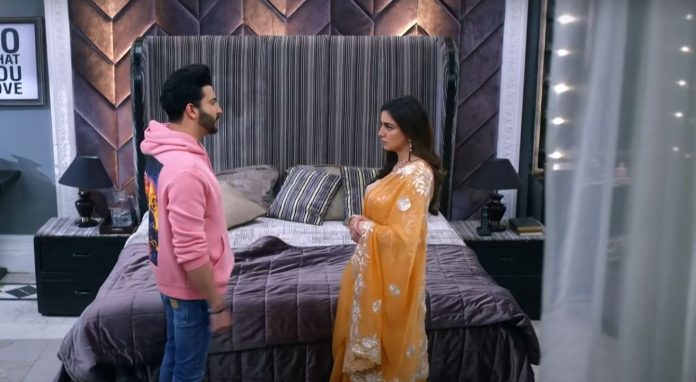 Kundali Bhagya 25th February 2022 Written Update New Find Preeta asks Sherlyn about Natasha, if the latter is really Sherlyn’s sister or not. She tells that Natasha doesn’t appear the same as Sherlyn by her behavior, class and status. She doesn’t find any relation between them. Karan tells Preeta that she provokes her enemies to take revenge on her by her behavior. He adds that this time she got saved, but next time, maybe she doesn’t get saved. He asks her not to provoke anyone against herself, else she will be at loss. Preeta asks him what does he mean. He tells that she only invites troubles and makes people want revenge on her even if they don’t thought of it before. He blames her for inviting problems herself and then taking the stress.

Earlier in the show, Preeta tells that she had seen Mona making lunch for Mahesh, she had added some chemical in Mahesh’s food, she was harming Mahesh, the family would have never believed her, so she had to do everything. She reveals how she had tricked Mona and added the poison in the food. She wishes Mahesh to recover soon. She tells that Mahesh will gain his old self when he stays with the family. She is sure that Mona was drugging Mahesh and making him turn violent. She reveals the truth of Prithvi bribing Mona to make Mahesh more insane. She is glad that her plan didn’t fail, and now Mona is out. Shrishti praises that Preeta has proved it once again that she can do anything for the family.

Shrishti asks Preeta to take care of herself and not risk her life again. Preeta tells that she is okay, nothing will go wrong, she couldn’t find any way, than taking the risk. She is happy thinking Rakhi will be so happy when Mahesh comes to stay with them. She wants to end the devil Prithvi’s chapter. She pledges to do anything to stop Prithvi and oust him. She tells that she will not take the risk again. She asks Biji and Shrishti to not worry for her. She stops them for the party to celebrate Mahesh’s birthday. She tells that she will pretend formal in front of the family and then allow them to celebrate his birthday. She can’t tell them herself which will prove that she loves them.

She doesn’t want to show her prove. She wants to wait for someone to come and tell her about the party. She asks them to sit in the room, she will get tea for them. She goes to the kitchen. Shrishti praises Preeta for failing Prithvi’s plan completely. She imagines his rage and jealousy. She fears that he would be preparing for another attack on Preeta now, and they shall be ready to counter attack him.

Sherlyn and Natasha get into an argument, and blame each other for Mona’s leaving. Sherlyn tells that Natasha should have thrown the drugs out of Mona’s bag. Natasha asks her not to vent out frustration on her. She doesn’t want to tolerate her. She tells that she should insult herself seeing the mirror. Sherlyn asks her to mind her language. Preeta finds them arguing. She suspects if Natasha is Sherlyn’s sister or not. She taunts them on their class difference. Natasha tells that she is smarter and better than Sherlyn. Sherlyn asks Natasha to shut up. Preeta asks her to learn manners. Sherlyn asks her not to intervene between them. Preeta finds Sherlyn too angered. She thinks if Sherlyn is angry that she has fired Mona. Natasha tells that Preeta is doing everything wrong. Preeta asks her to keep such one liners to herself.

Natasha tells that not everyone can hit such one liners. Preeta goes away. Sherlyn asks Natasha to not argue with Preeta, else Preeta can make them out of the house, she is the house owner, she can do anything. She tells that Mahesh will be staying in the house now and maybe they can get exposed soon. She warns Natasha. Prithvi gets mad at Preeta. He shouts that he hates Preeta, that she ruined his plan. He tells that she has fired Mona, and now he will make sure that Preeta leaves the world. He vents out his anger. Rakhi thanks Preeta for making Mona leave the house. Preeta doesn’t show her real emotions. She tells that she has done this for herself, Mona was troubling her by disobedience.

Rakhi tells that Mona’s leaving will be proved good for them. She is grateful. Preeta can’t tell her that she is so happy. She turns away and smiles. Rakhi requests her to keep a party for Mahesh’s birthday. Preeta thinks she wanted this. She happily wants to agree. She acts in front of Rakhi and refuses first. Rakhi accepts her decision. Preeta tells that they shall keep an intimate affair and not invite many guests, they can just celebrate with the family. Rakhi thanks her. Preeta tells that she will make the arrangements. She shares her concern that Mahesh may react again seeing the family.

She suggests that they get Mahesh out of the basement right now and make him feel comfortable, then he will feel normal at the time of the birthday party, he will not react strange in front of the family. Rakhi feels happy that she got more than she asked for. She just wanted to celebrate Mahesh’s birthday. She is glad that Preeta permitted the family to spend time with Mahesh. Karan meets Preeta. He asks her about the decision to get Mahesh out of the basement. He asks why is she making this big favor. He tells that Rakhi thinks that Preeta loves them, so she is bringing Mahesh to the family. He was also mistaken in the same way. Preeta asks him not to talk about love.

He tells that she likes to invite problems and takes risk, this time she got saved, but next time he will not let such thing happen. He tells that he will always protect her. He wants Mahesh to get fine and see the person to whom he named the entire property. He goes in anger. Preeta has risked all the relations to get the family back, but didn’t lose any relation till now. She sheds tears. She tells that she still loves Karan a lot, when she achieves her goal then she will reveal the real emotional Preeta to Karan.

Moreover, Rakhi runs to the family and tells them that Preet has permitted them to bring Mahesh to the family and also asked them to celebrate his birthday. The family is happy to know this good news. Prithvi tells that the doctor had warned them that Mahesh should be in the basement, his condition isn’t fine and he can attack anyone. Rakhi tells that Mahesh gets violent when he sees many people at once or when he feels harmed, Preeta has found a solution, now Mona isn’t there to torture Mahesh, he will be with them from now, they will celebrate the birthday together and also organize a party for him. Prithvi and Sherlyn seem upset seeing the Luthras’ smiling faces. Stay tuned.

Reviewed Rating for Kundali Bhagya 25th February 2022 Written Update New Find: 3/5 This rating is solely based on the opinion of the writer. You may post your own take on the show in the comment section below.