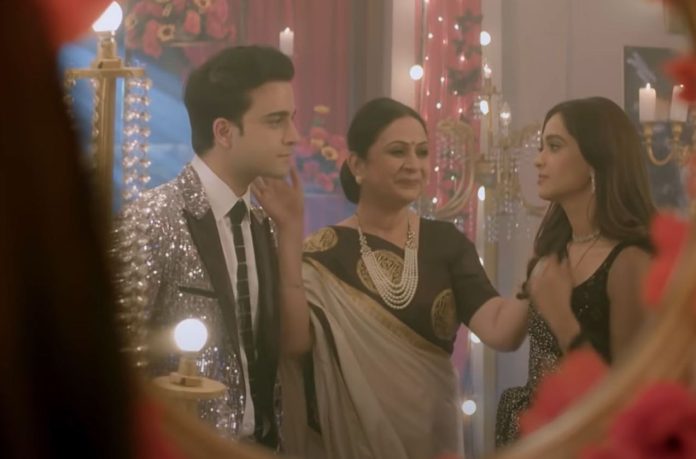 Kumkum Bhagya 1st March 2022 Written Update End of Pranbir Rhea and Aaliya decide to defame Prachi and get her punished in the same way like the latter had humiliated Rhea before. Aaliya wants Prachi to lose the support from the NGO. She takes Rhea to the NGO, where they tell the NGO head about Prachi’s pregnancy. Rhea tells that Prachi had been cheating on Ranbir and she is currently carrying Siddharth’s baby, that’s a proof of her extra-marital affair. The lady tells them that if they get the proof of Prachi’s pregnancy and also bring a DNA proof that the baby doesn’t belong to Ranbir, then she will herself take an action against Prachi.

She tells that once Rhea confirms these two things, then she shall get justice. Rhea is excited to expose Prachi and then get her out of Ranbir’s life. Prachi tells Shahana that she is thinking to tell Ranbir about her pregnancy, that he is going to become a father. Rhea calls up the doctor to know about Prachi’s reports. The doctor tells her that she has already sent the reports, which will soon reach her. Rhea gets anxious to receive the reports and then expose Prachi in the party. What will be the fate of Prachi and Ranbir’s relation? Will it be the end of Pranbir? Keep reading.

Earlier in the show, Rhea tells that its her turn now to payback. Aaliya waits Rhea’s good fate to begin. Prachi thinks that she fainted due to pregnancy. She tells that she was feeling weak and exhausted, so she had fainted. She wants to finish the work. Ranbir orders her to not go anywhere. He asks her to take rest atleast on Dida’s sake. He stays back to take care of Prachi. He tells that she should have told him about her weakness, he would have made the breakfast for her like before. He is angry on her. She finds it strange that he is behaving concerned for her.

Rhea and Aaliya shed fake tears in front of the NGO ladies. Rhea tells that she has lost courage now, she has broken down completely. She tells that she is Abhishek Mehra’s daughter. Aaliya tells that she has raised Rhea, who never got love from her mum, her parents got separated after Rhea was born, her mum returned after many years with another child, Prachi is Rhea’s sister, who had enmity in heart for Rhea, she has snatched Rhea’s love and married her boyfriend. Rhea tells that Ranbir had left her in the mandap after Prachi brainwashed him, Ranbir married Prachi. She adds that she got married to Ranbir’s cousin Siddharth, but Prachi couldn’t see her happiness, she broke her marriage with Siddharth by having an affair with him.

He tells that she might not be hungry or suspect him for mixing something in the food. He swears that he didn’t mix anything in it, he has come to just take care of her. He asks her to trust him. He tells that she can’t refuse to eat. She asks him not to give her a lecture. He wants to give her love, but apologizes. She apologizes to him. He feeds her the food. Rhea begs the NGO ladies to help her. She tells that she is telling the truth, Prachi is playing the victim card, but she isn’t right. Aaliya and Rhea invite the NGO ladies in the anniversary party.

They want the NGO ladies to know Prachi’s truth when the reports come and confirm Prachi’s pregnancy. Aaliya asks them to just come to support Rhea. The lady asks them to confirm Prachi’s pregnancy and also the fact that the baby isn’t Ranbir’s child, then they shall get the justice and also see the culprit get punished. She tells that they will blacken Prachi’s face and punish her. Ranbir and Prachi have a moment. Shahana likes to see them sharing a moment of peace after a long time. She wishes that they both stay happy together.

Prachi tells that she will eat the food by her hands. Ranbir goes to select the clothes for Prachi. He selects a saree for her. He tells that she will look beautiful like always. He asks her to finish the food. He finds Shahana at the door. Shahana likes Ranbir’s choice. She asks Prachi to take help from Ranbir. He tells that every girl should have a guy like Ranbir in her life. Prachi asks her to keep him. Shahana tells that Prachi doesn’t keep or leave him. She asks Prachi to give a chance to Ranbir, because he paid her respect by applying Kumkum to her. Prachi tells that she is thinking to tell him that she is pregnant. Shahana tells that Ranbir will go mad in happiness when he knows that Prachi is going to fulfill his third dream. Prachi asks Shahana to set the decorations on the terrace. She wants to surprise Ranbir.

Shahana tells that everything will be ready. Prachi plans to tell the truth to Ranbir when she finds a chance to take him along to the terrace. Shahana hugs her happily. Later in evening, Dida welcomes the guests in the party. Ranbir gets many compliments. Dida and Ranbir like Prachi’s party look. Rhea tries to get Ranbir’s attention. She gets upset when she hears him praising Prachi. He tells Dida that he has decided the saree for Prachi. Dida applies black dot to Prachi and Ranbir. She blesses them to be together. Rhea and Aaliya see Pranbir together. Rhea tells that she will show the world that kajal can’t be a protector always, it can become a stain as well. She wants to take her revenge on Prachi. She tells Aaliya how Dida has applied black dot to Prachi and Ranbir. She isn’t happy seeing Ranbir’s feelings developing for Prachi once again.

Aaliya tells that any relation can break when a man’s ego is hurt. She adds that once they prove that Prachi is carrying Siddharth’s child, Ranbir’s love will change into hatred. Rhea goes to call the doctor and ask for reports. Vikram and Pallavi come in the party. Ranbir tells that he has planned a surprise. Aaliya asks Rhea to wish her in-laws first. They go to wish Vikram and Pallavi, and compliment them. Prachi also steps ahead to wish them, but Pallavi is too upset to forget whatever happened. Pallavi doesn’t forgive Prachi.

Ranbir thanks the guests for making the moments more special by their gracious presence. He feels blessed to get amazing parents. He loves them a lot. He tells the guests about Vikram and Pallavi’s happy loving married life. He gives a cute loving speech for his parents. Rhea has her eyes on Prachi. She wants to reveal Prachi’s pregnancy reports in the party. Would Prachi share the good news of her pregnancy with Ranbir first, or would Rhea make it a win-win situation for herself by using the truth against Prachi? Stay tuned.

Reviewed Rating for Kumkum Bhagya 28th February 2022 Written Update Biggest twist: 2/5 This rating is solely based on the opinion of the writer. You may post your own take on the show in the comment section below.