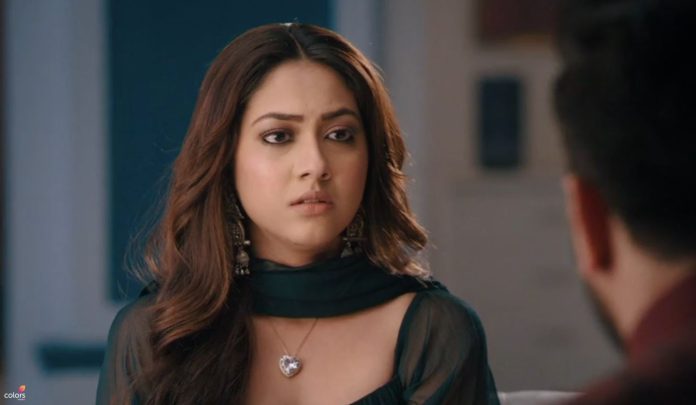 Fanaa 2nd March 2022 Written Update Pakhi shocks Agastya Agastya sits beside Pakhi. He tells her that everything will go fine. Neelima tells Pakhi that she understands her tough situation. She also tells Pakhi that she is proud of her courage. Neelima asks Pakhi to always be courageous like this and never accept defeat. Anup receives a call from someone who tells him that they lost the order. Pakhi’s aunt gets angry hearing this. She accuses and blames Pakhi and her broken marriage for the problems arising in their family. Agastya gets angry and asks Pakhi’s aunt to get quiet.

Pakhi’s aunt asks Agastya to not interfere in their family matters. She tells Agastya that they consider him family but he is not really their family member. This shocks everyone. Pakhi’s aunt keeps on saying that Sameer’s family and daughters are always given good and better things than them. She says Prema and Sameer took a bigger room than her and husband. Pakhi’s aunt also says that Pakhi and Shanaya roam around in taxis but Sameer used to find it difficult to buy a scooty her son, Mohit wished for. She keeps her nonsense on. Pakhi’s aunt at last calls Pakhi, Shanaya and Prema a burden on her family.

She asks Prema to not overthink as she is and her children not a burden on anyone. Prema feels much broken. Agastya leaves outside Pakhi’s house. He meets a person about Sameer’s age. Agastya sees the person tense about his broken vehicle. He helps the person fix his vehicle. The person thanks Agastya for helping and calls him a nice person. Agastya feels guilty for separating Pakhi from her father. He thinks a father is a very important person in a daughter’s life. Virat reaches Pakhi’s house and tells her that he understands her situation. He tells Pakhi that she can’t leave the city or country till Ishaan’s case ends.

Pakhi understands Virat’s words and signs in yes. Later, Virat is seen questioning Agastya outside Pakhi’s home. He asks various questions from Agastya. Agastya sees a lighter in Virat’s hand. He feels scared and uncomfortable as he keeps on getting flashbacks of his childhood fire incident. Flashback shows child Agastya standing in a locked room, which caught fire. Child Agastya is seen screaming for help from his mother, but no one opens the door for him. Flashback ends. Virat asks Agastya where he was when Sameer met with an accident. Aagstya makes some excuse of work and says he was busy in his work/meeting.

Virat notices Agastya getting scared and restless seri his lighter. He leaves, warning Aagstya to keep his sources ready as he may need it in future. Agastya glares at Virat. Some people (landlords) enter and ask Srivastavas to empty and leave their house within a week. This shocks Srivastavas. They feel worried. Pakhi and Prema question their landlords how they can suddenly ask them to leave a house which has their long life memories. Landlords tells Srivastavas that Pakhi is accused of her groom’s murder. They say Pakhi can have a bad effect on their neighborhood children. Shanaya gets angry and tells the landlord that their son consumes drugs. Landlords’ faces fall.

Prema asks landlords how they can believe fake news. Neelima comes forward and takes a stand for Pakhi and her family. Landlord’s ask Neelima if she would take Pakhi to her home. Neelima says yes she can take home and always wanted to. She reveals that she always wanted to take Pakhi to her home as her daughter-in-law and Agastya’s wife. Agastya comes inside Pakhi’s house and overhears everything. He pretends innocent and shows that he never had the intention to marry Pakhi. Pakhi’s family feels happy hearing that Neelima wants to get Pakhi and Agastya married to each other. Landlords leave. Neelima unites Pakhi and Agastya’s hand. She requests Pakhi to fulfill her wish and marry Agastya. Neelima asks Pakhi to not reject her proposal as her refusal/rejection will hurt her.

Pakhi stands confused and leaves to her room. She gets lost in her father’s memories and thoughts. Prema comes to Pakhi’s room. Pakhi tells Prema that she always used to take/make decisions from her heart. She says her decision and choice got proved wrong. Prema tells Pakhi that a person should always think from the heart. She explains to Pakhi that marrying Agastya would be the right decision for her. At Raichand house, Naveli and her mother show objection in accepting Pakhi for Agastya. Naveli asks her mother to make Neelima understand that Pakhi isn’t good for Agastya. Naveli’s mother says no one will listen to her. Still Naveli’s mother tries to make Neelima understand that Pakhi isn’t a nice girl. Naveli says murder case is going on Pakhi. Naveli’s mother calls Pakhi a gold digger. Naveli tells Neelima that Pakhi is not of Agastya’s level too.

Neelima feels irritated and tells Naveli and her mother that Pakhi is perfect for Agastya and is a good girl. Agastya overhears everything. He scolds Naveli for bad mouthing about Pakhi. At Srivastava’s house, the whole family is seen at the dinner table. Pakhi’s aunt asks Pakhi to agree to marry Agastya. She tells Pakhi that now only her marriage with Agastya can solve their family’s issues. She says Agastya is nice and most importantly rich. These words by her aunt makes Pakhi feel disgusted. Later, Pakhi is seen sitting in her room, lost somewhere. Prema comes to her. Pakhi tells Prema that she can’t be selfish and ruin Agastya’s life by marrying him. Prema tells Pakhi that with Pandit Ji’s help, Neelima has got taken out on an auspicious day for her and Agastya’s marriage. She also tells Pakhi that she and Agastya could get married within the next seven days. Prema asks Pakhi to give her answer to Neelima soon. Pakhi tells Prema that she doesn’t want to get married but instead wants to work a lot and take care of her and Shanaya.

Later, Pakhi is seen talking to her old client. She asks him how he can ask her to not organize his daughter’s marriage at the last minute. She says she has already talked to vendors for wedding stuff and preparations. The client tells Pakhi that he can let her handle his daughter’s marriage as according to news she is a murderer bride, who killed her groom. Angry Pakhi asks her client how he can believe in fake news. After losing her one client, Pakhi is seen talking to her another client. This another also refuses to let Pakhi arrange his company’s event because of murder allegations on Pakhi. This angers and upsets Pakhi. In the next episode, Pakhi will meet Agastya. Agastya will ask Pakhi why she isn’t picking up his calls or replying to his messages. Pakhi will tell Agastya that she can’t marry him. Pakhi’s refusal to marry him will shock Agastya.

Reviewed Rating for Fanaa 2nd March 2022 Written Update Pakhi shocks Agastya: 3/5 This rating is solely based on the opinion of the writer. You may post your own take on the show in the comment section below.