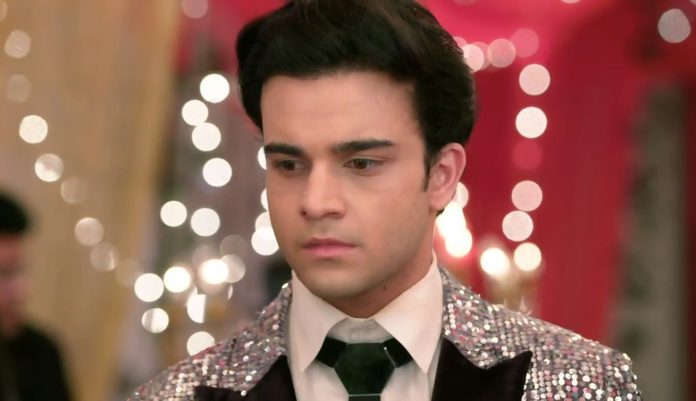 Kumkum Bhagya 8th March 2022 Written Update Ranbir’s stand Rhea breaks out Prachi’s pregnancy news to the family, after playing Prachi and Siddharth’s pictures on the screen. She tells the family that Prachi is surely carrying Siddharth’s baby. Prachi gets worried thinking how will Ranbir react to her pregnancy news, which he deserved to hear from her. He tells that Prachi is his wife, he trusts her and will not question her this time. Ranbir holds Prachi’s stand. He takes a stand for Prachi, surprising her and shocking Rhea and Aaliya. Rhea doesn’t know why Ranbir is behaving so mad in love with Prachi, and doesn’t even care when she named the baby to Siddharth. Ranbir wants to believe Prachi this time, and not make the same mistake of his past which made him lose Prachi. What will Rhea do next? Keep reading.

Rhea’s plan fails when Ranbir supports Prachi. He asks Rhea to never interfere in his life. Rhea angrily goes to her room and breaks the things. She vents out her frustration. Pallavi reaches her. She asks Rhea to never do such a mistake again. She tells that Rhea has ruined the anniversary party and also defamed the family. Rhea wanted to humiliate Prachi, but this time Prachi got the support from Ranbir surprisingly. Pallavi tells that Rhea has done too wrong and become bad in everyone’s sight. She asks Rhea what did she want to prove, that Prachi is pregnant, she should not forget that one shouldn’t hurt a woman’s dignity. She warns Rhea. She tells that she is with Rhea to separate Ranbir and Prachi, but she doesn’t want to support in wrong things.

Earlier in the show, Prachi learns Rhea’s plans from the doctor. Rhea tells that she is going some interesting photos to them. She asks Ranbir to leave Prachi. Ranbir tells Prachi that he doesn’t understand what is happening. He doesn’t want to know anything that he should have known before. He tells that he will always love her, but he feels bad when she hides things. He gives her a chance to admit the truth, which Rhea is trying to tell him. He tells that Rhea always spoils the matters. He asks her to trust him and tell the truth, else it will be too late. Prachi is sure that Rhea is going to tell her pregnancy reports. She tells him that its already late. What will happen next? Stay tuned.

Ranbir promises to trust Prachi if she tells him the truth before it gets late. Prachi tells that its already late. He tells that she always hurts him. He is worried after his observation, that she might be suffering from any sickness. He doesn’t want her to die by some sickness. He grows worried for her life. Ranbir cries in tension. Prachi finds him crying. Rhea apologizes to everyone when she isn’t able to find the pictures. Pallavi asks her about the photos. Rhea tells that she wanted to prove Prachi’s reality to them. She asks them to forget the photos, she will bring out the truth some other way. She asks Dr. Pooja to answer the family.

Prachi asks Ranbir if he really felt that she is going to die. He tells that he will not let this happen. Rhea finds Ranbir holding Prachi’s hand. She makes her away from Ranbir. She asks Prachi to raise a voice if she thinks that wrong is happening with her. She asks doctor to tell them why Prachi faints often. She tells that Prachi isn’t understanding their emotions. She asks doctor to tell them the secret. Dr. Pooja tells that Prachi is getting dizzy for a reason, because she is pregnant. Ranbir and Kohlis are shocked. Ranbir asks Prachi is she pregnancy. Rhea tells him that Prachi is pregnant, she has hidden this news from everyone.

Rhea tells that Prachi has a big reason to hide about her pregnancy, it’s a good news, but Prachi has kept a secret, its not a good news for Prachi in this case, because the baby belongs to Siddharth. Ranbir, Kohlis and even Prachi is shocked this time. Rhea calls the baby illegitimate. She tells that there can’t be any other reason for a woman to hide the pregnancy. She tells the doctor that she lost the pregnancy report. Dr. Pooja asks Rhea how will they believe her without checking the reports. Rhea tells that she trusts her. Dr. Pooja lies to them. She tells that Rhea asked her to lie to them about Prachi’s pregnancy. Rhea loses her cool.

Dr. Pooja tells that Rhea had asked her to lie, in order to break Prachi and Ranbir’s relation. Aaliya asks the doctor why is she lying when Prachi is really pregnant. Doctor tells that Rhea wanted to humiliate Prachi. She adds that she couldn’t see the fake blames on Prachi. She decides to say the truth. She apologizes to Kohlis. Rhea asks the doctor why is she lying. Doctor catches Rhea’s lies and her intentions. She doesn’t want to support Rhea in her lies. Pallavi asks Rhea what’s wrong with her that she didn’t think of the family.

Vikram asks Rhea how does she get courage to do such wrong. Ranbir rebukes Rhea. He holds Prachi’s hand and declares his love for Prachi, who is his real wife. He asks Rhea how can she connect Prachi and Siddharth’s name. He tells that he felt that Prachi is going to forget him and settle with Siddharth. Rhea attacks the doctor. She asks doctor to tell them the truth of Prachi’s pregnancy. Dr. Pooja threatens Rhea of police complaint. Rhea asks Prerna to do something and help her. Prerna tells that Ranbir had confessed that he is Prachi’s husband and loves her a lot, it means that Rhea is trying to snatch Prachi’s husband. The NGO ladies scold Rhea. They angrily decide to punish Rhea by blackening her face.

Rhea is shocked when her plan backfires. Even Aaliya didn’t expect this to happen. Prerna punishes Rhea. Rhea gets humiliated. Prachi comes to her rescue. She asks the NGO ladies to leave. She cleans Rhea’s face. Rhea pushes Prachi in anger. She gets mad at them. Doctor apologizes to Prachi. Prachi thanks the doctor for supporting her. She remembers that she convinced the doctor to lie. She tells that she doesn’t know Ranbir will accept the baby or not, after forgetting their problems. She wants to tell Ranbir in a special way.

Doctor tells her that Ranbir loves her a lot, Rhea is attempting to snatch Ranbir. She relates to Prachi’s issue, after losing her husband to the second woman. She encourages Prachi to fight for her husband. Shahana asks Prachi to tell Ranbir about her pregnancy soon. She tells that Rhea had taken Siddharth and Prachi’s pictures and was going to show that to everyone in the party. She adds that she had deleted the pictures from Rhea’s phone. Prachi thanks her for saving her. She hugs Shahana.

Reviewed Rating for Kumkum Bhagya 8th March 2022 Written Update Ranbir’s stand: 3/5 This rating is solely based on the opinion of the writer. You may post your own take on the show in the comment section below.