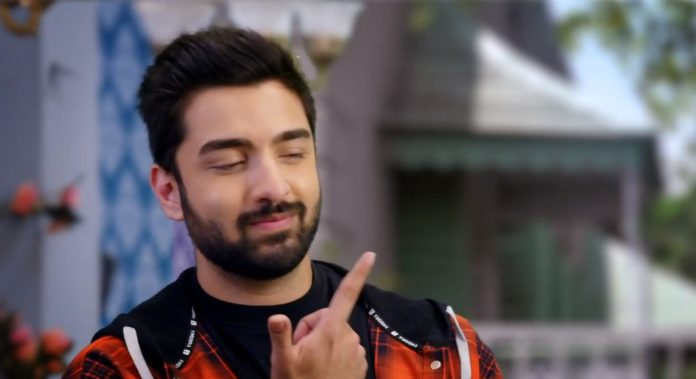 Bhagya Lakshmi 9th March 2022 Written Update Romantic Rishi Lakshmi comes to Oberoi house to meet Rishi. Rishi feels happy seeing her. He runs to see her and throws a smiley ball at her. He waves her and signs her to smile. Malishka watches their romance. She gets upset. Rishi turns and sees Malishka behind. She sees Rishi and Lakshmi exchanging gestures. She cries and goes to Karishma to tell her what she had seen just now. She tells that Rishi and Lakshmi’s romance has started. Karishma and Sonia are shocked to hear that. Malishka tells that Rishi and Lakshmi are behaving like college teens. She feels saddened. Sonia tells a plan by which Malishka’s problems will end. Rishi confesses his feelings for Lakshmi to Malishka.

He tells that he will not lie, he really feels for Lakshmi, he doesn’t understand his feelings and the reason for the evolution, but he knows that he really likes Lakshmi. Malishka is stunned by his unexpected confession. On the other hand, Rano calls Balwinder home. She tells him about everyone’s sleeping time, when he can come and kidnap Shalu. He tells that everyone will lose their sleep once he kidnaps Shalu. Balwinder and Rano plan the kidnapping crime. What is Malishka planning to do against Lakshmi? Keep reading.

Earlier in the show, Rishi gets glad to know Lakshmi’s concern. The call disconnects. They both try to call each other again. Shalu also feels that someone is following her. She thinks its Balwinder. Rano tells the neighbor Binny about Lakshmi, who refused to Neelam when the latter offered 50 lakhs. She tells that she will take that money from Lakshmi, Oberois will give any money for Rishi’s sake. She plans to get Lakshmi kidnapped. Balwinder calls her plan a flop. He tells that he will kidnap Shalu instead.

Balwinder tells that they will kidnap Shalu, because Lakshmi loves her sisters a lot, like he loves Lakshmi. He asks Rano to give him 25%. Rano agrees to his plan. She also agrees to give his share. Bani comes there to call Rano. Rano sends her away. Balwinder tells that he will execute the kidnapping at night. Bani informs Shalu about Balwinder. Shalu thinks who is following her if not Balwinder. She tells that she felt Balwinder is following her. She asks Bani not to worry for her. Rishi asks Sudeep about Lakshmi’s call. Sudeep tells that Lakshmi asked him not to tell anything. Rishi asks him to tell him everything next time if Lakshmi calls. Sudeep sees Lakshmi at the gate.

He tells that Lakshmi has come to meet Rishi. Rishi smiles seeing Lakshmi. Sudeep asks him to stay happy. Rishi goes to the balcony to see Lakshmi. Lakshmi remembers Neelam’s words and turns to leave. Rishi gets a smiley bag and throws it to hit her back. She stops and sees Rishi waving to her. She waves back. He calls her. She asks him how is he. He tells that he is good, he isn’t bad. He asks her to throw the ball. He suggests that she comes upstairs and returns the ball. They both make excuses and don’t admit that they are longing for each other. Malishka looks for Rishi in the room. She hears Rishi talking to someone and goes to see. She finds Lakshmi outside the house. Rishi lets Lakshmi leave and signs her to smile. He sees Malishka fuming.

Balwinder and Rano get into an argument. He learns that Rishi has left Lakshmi, and now they aren’t together. He asks her why did she not tell him before. She asks him to focus on the kidnapping. He tells that kidnapping will happen at night. Malishka asks Rishi for the explanation or apology. He tells that he has nothing to clarify. He defends Lakshmi. He feels suffocated in their relationship. He tells that such possessiveness doesn’t appear as love, but a cage. Malishka goes to Karishma and Sonia. She reveals about Rishi and Lakshmi, who were waving and smiling seeing each other, just like college teens romance. She tells that Lakshmi is snatching Rishi, he doesn’t know that he is cheating on her. She breaks down.

Karishma asks her to stop crying. Sonia asks Malishka to block Lakshmi’s number in Rishi’s phone. Malishka tells that Rishi can still call Lakshmi. Karishma tells her that they will block them in their lives. She advises Malishka to apologize to Lakshmi and invite her for dinner, when the entire family will be away for a function. She explains the plan to Malishka. Kiran arrives there and learns their plan. Sonia feels proud of smart Karishma. Balwinder’s aide follows Shalu. Balwinder meets his aide. He tells that Lakshmi and Rishi are separated now. He plans to get Lakshmi back by using Rano. He adds that he is helping himself, he wants to take his revenge on Lakshmi, he just has to kidnap Shalu at night.

Malishka returns to Rishi. She tells that she isn’t angry, she is sorry to overreact. He tells that he likes Lakshmi but he loves Malishka. He adds that he has a relation with Lakshmi, he feels for her for no reason, he feels sad when he sees her crying. He tells that nobody can stop him if he falls for Lakshmi, but he loves Malishka and is committed to her. He asks her not to feel insecure, he just respects Lakshmi. He feels responsible for Lakshmi. He asks Malishka to understand him. She tells that Lakshmi and her relation started on a wrong note. He calls her right. She tells that she is thinking to apologize to Lakshmi, who has done a lot for him, he is her life and she should say sorry once. She fools him. Rishi calls Lakshmi to invite her. Malishka goes out and hears their talk.

Lakshmi asks him the reason for the call. He invites her for dinner. She asks him who asked him to do so. He tells that he is saying this by himself. Malishka asks him to invite Lakshmi by Virender’s name. Rishi tells Lakshmi that even Virender wants her to come. He asks her to come once and meet the family. He convinces her. She agrees to come for dinner. He thanks her. He asks her to get her sisters along, then she would be comfortable. Malishka hugs Rishi and thanks him for agreeing to her. Rano waits for Balwinder. He makes an entry home to kidnap Shalu.

Reviewed Rating for Bhagya Lakshmi 9th March 2022 Written Update Romantic Rishi: 5/5 This rating is solely based on the opinion of the writer. You may post your own take on the show in the comment section below.