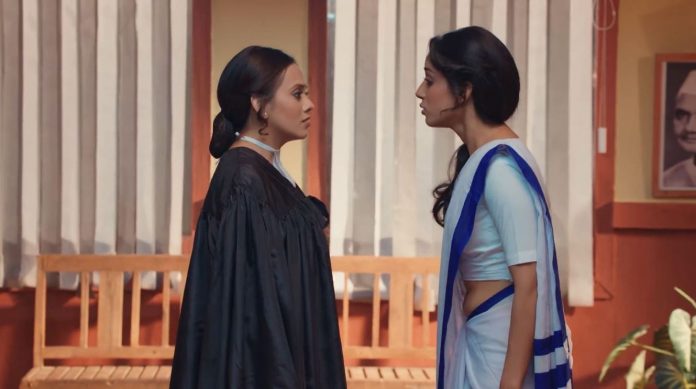 He requests the judge to punish a dangerous criminal like Prisha severely. Vaijayanti stands up and says criminals are punished, not innocents. She tells the judge that the court wouldn’t have reopened this case if it would have been an open and shut case. Vaijayanti tells the judge that she will prove that the police are somewhere responsible for Prisha’s present condition. She says that she called the inspector who handled Venky’s murder case earlier to prove that Venky’s murder wasn’t investigated properly by police earlier. Yuvraj thinks that Vaijayanti didn’t get provoked against Prisha after his lots of tries to provoke her. He further thinks that he has to see how Vaijayanti will prove Prisha innocent.

Vaijayanti says that murderer can be someone else but Prisha was bearing the real murdrer’s punishment since last 5 years. She says Prisha changed her identity and remained away from her family for the last five years to escape unfair punishment. Vaijayanti requests the judge to give bail to Prisha till a solid proof is found against her. Advocate Khatri tells the judge that the real gun may have been destroyed after firing a bullet from it and Prisha could have picked another gun. Vaijayanti says that it’s also possible that real gun maybe somewhere with the real murderer at present. She tells the court that Prisha can’t be kept in prison only on doubt as she proved that not Prisha but someone else could be a murderer. Vaijayanti again requests the judge to give bail to Prisha till Venky’s murder investigation gets completed.

Prisha stops Vaijayanti and tells her that she won’t tell the truth to anyone. Vaijayanti asks Prisha why she is saving Rudra and sacrificing her life for him. Prisha says she did all this because she loves Rudra even more than herself. She requests Vaijayanti to do something as Rudra’s name shouldn’t get involved in all this. Vaijayanti tells Prisha that she will try. Prisha asks Vaijayanti to not try instead make sure that Rudra’s name doesn’t get involved in Venky’s murder case. Later, Rudra scolds Advocate Khatri for failing in front of less experienced lawyer Vaijayanti. Advocate Khatri tells Rudra that they still can prove that Prisha shot Venky from another gun. Rudra asks Advocate Khatri to do anything to keep Prisha behind bars forever.

He says Prisha should be punished for keeping his daughter away from him for 5 years. Advocate Khatri assures win to Rudra and leaves. Rudra comes to Prisha and Vaijayanti. He claps and taunts Prisha and Vaijayanti for cleverly fooling the court and getting bail in just one hearing. Rudra says cleverness is in Srinivasan’s blood. Vaijayanti gets angry at Rudra hearing this. Rudra asks Vaijayanti to not talk in between. He asks Prisha if now she will try to snatch his kids from him. Rudra tells Prisha that he will not wait for law to punish her if she will try to snatch his kids from him. He doesn’t let Prisha leave and warns Prisha to stay away from his kids. Vaijayanti asks Rudra bti shut down his nonsense. Rudra leaves, warning Prisha.

Rudra’s agent tells him that important investors are reaching his home with him for a meeting. He requests Rudra to not let the earlier banter repeat as they may lose an important and big deal. Rudra says okay and disconnects the call. He wonders why he is thinking about Prisha a lot and feels that he has hurt Prisha. Rudra also wonders why he wants to hug Prisha even after Prisha did wrong to him. At Khurana Mansion, Ruhi and Saaransh wait for Prisha and Vaijayanti. Rudra’s agent comes with investors. Rudra also returns to Khurana mansion and requests Ruhi and Saaransh to go upstairs as he has a very important meeting. Ruhi and Saaransh ignore Rudra. Worried kids think about calling Vaijayanti to get the court decision update from her.

In the next episode, Agent will ask Rudra if he will be to do the concert tomorrow in such a short notice. Rudra will agree to this. Ruhi will ask how Rudra can do such a big concert when her mother is in prison. She will get determined to ruin Rudra’s concert and Saaransh will support Ruhi in this. On the other hand, Yuvraj will also plan to ruin Rudra’s concert with the Rohtak village head by provoking him against Rudra. Saaransh will change Rudra’s phone with another phone to not let him reach his own concert.

Reviewed Rating for Yeh Hai Chahatein 9th March 2022 Written Update Prisha’s sacrifice: 3/5 This rating is solely based on the opinion of the writer. You may post your own take on the show in the comment section below.