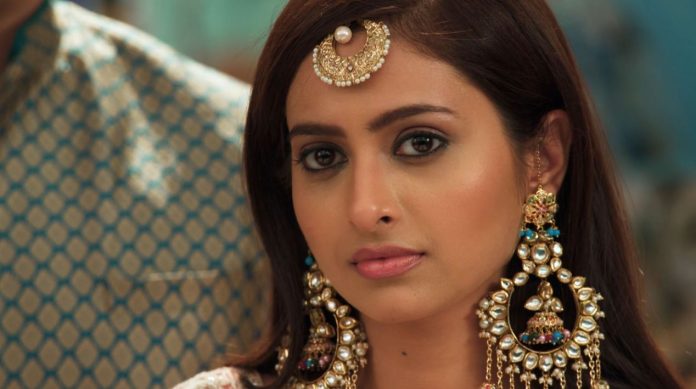 Abhimanyu gives the toy gun to Akshara and starts behind the wall. Everyone starts cheering for Akshara and Abhimanyu. As Akshara fails in her first attempt, Abhimanyu teases her. Akshara continuously misses her shots. She shouts and pretends to be in pain. Abhimanyu gets up from behind the wall in worry. Akshara takes the opportunity and shoots the tilak right at Abhimanyu’s forehead. Goenkas jump in joy and victory. Parth says Akshara did cheating. Harshvardhan tells Abhimanyu that he embarrassed him. Manish comes and says Goenka’s won and Birlas lost. Akshara says she finally applied Tilak to her groom.

Aarohi feels jealous seeing the love between Akshara and Abhimanyu. All the siblings of Goenka and Birla family dance happily together with Akshara and Abhimanyu on the song, “Salaame Ishq”. The children of both families include elders in their dance and happiness. Harshvardhan doesn’t like Manjiri dancing, Manijiri notices this. Mahima comes and dances with everyone. Harshvardhan stands alone aside. Abhimanyu picks up Akshara in his arms and the latter gets shy. Neil naughtily troubles Aarohi while dancing. Aarohi hits Neil’s foot with her foot to answer him. Harshvardhan feels irritated with people dancing and Birlas defeat in Tilak Ceremony.

He wonders if Goenkas doesn’t know dance forms other than ghoomar. Manish goes to Harshvardhan and explains to him how to do Ghoomar. He troubles Harshvardhan by telling him that he can’t do all the steps of ghoomar. After this, Abhimanyu secretly romances Akshara while dancing. Neil also dances with Akshara. Except Aarohi and Harshvardhan, everyone enjoys and celebrates happiness. Jealous Aarohi puts her evil eyes on Akshara and Abhimanyu’s Tilak. She intentionally makes the Tilak utensils and thaal fall down. Everyone looks shockingly at the fallen Tilak thaal. Aarohi pretends innocence and says that she didn’t do it on purpose. She says her lehenga hit the thaal while dancing and it fell down. She says she is sorry.

Mahima asks Aarohi if she is sure that she was only dancing. Manjiri says however it happened but it’s not right. Aarohi says it was just an accident. Neil says everyone was dancing. He asks Aarohi how only she reached near the tilak thali. Aarohi angrily asks Neil if he is saying that she did it on purpose. Neil tells Aarohi that only she would know if she did it on purpose or not. Manjiri asks Neil to leave this matter behind. Mahima tells Manjiri that it is not a petty issue that can be ignored. She angrily asks Aarohi how tilak thali fell down actually. Suhasini says that an inauspicious thing has happened. Harshvardhan says inauspicious things have been happening since the beginning and are nothing new.

After this, Manjiri performs Akshara’s Tilak and covers her head with a bridal chunri. She also makes Akshara wear her family bangles. Akshara shows her bangles to Abhimanyu and they both smile large in happiness. Like Goenkas gave gifts to Abhimanyu, Birlas give gifts to Akshara. Abhimanyu and Akshara go to take Manjiri’s blessings but she asks them to take Suhasini’s blessings first. Akshara and Abhimanyu touch Suhasini’s feet and then Swarna’s feet. Everyone blesses the new couple. When Akshara and Abhimanyu move forward towards Aarohi, Aarohi praises their jodi. Abhimanyu gives Aarohi a side hug.

Akshara uses this opportunity and kisses Abhimanyu on his cheek, surprising him. She gets back shyly as the electricity returns. Akshara asks Abhimanyu if he got his fees as she doesn’t keep any dues. Abhimanyu signs Akshara that he got his fess from her. Siblings stop Akshara and Abhimanyu from coming out of the couple’s frame. Aarohi gets more jealous and angry. Manish notices Harshvardhan taking only Abhimanyu’s photograph by zooming on the camera to keep Akshara away from the photograph. Aarohi separates Abhimanyu-Akshara, and comes in between them in the couple frame. This shocks everyone.

Aarohi says that the newly weds can’t get a good picture unless a brother-in-law or a sister-in-law is the frame. She asks if isn’t she right. Aarohi says she doesn’t know about the bride’s brother-in-law, but the sister-in-law (Aarohi) of the groom will always be found in every photograph of the bride and groom, just like a third wheel. Everyone feels irritated but smiles. All siblings from the Birla and Goenka family, one by one, enter the frame. Abhimanyu tells Anisha that her turn will soon come. Kairav also enters the frame and says even he will have fun and trouble his brother-in-law Abhimanyu. Abhimanyu asks Kairav to have all the fun he wants. He sarcastically asks Kairav to remember that he will have to face his wrath if he will make him angry.

Akshara asks Abhimanyu to not even think of threatening her brother. She asks him to see what will happen if she gets angry. Abhimanyu holds his ears and apologizes to Akshara. Harshvardhan feels irritated and thinks that Akshara has already started practicing to keep Abhimanyu in her control or dance on her fingers/tune. He further thinks that Abhimanyu is worried about his bride getting upset, but not worried that his father has been upset for a long time. Neil asks everyone to stop being angry and just be happy today. Manish feels nice seeing all children happy. Akhilesh says he prays and hopes that children’s happiness remains just like present always.

Akshara says many relationships formed today as she became someone’s sister-in-law and even she got her sister-in-law in Anisha. Anisha and Kairav get shy. Mahima feels a little shocked. All siblings tease Anisha and Kairav for blushing. Mahima says they will talk about this some other time. This makes everyone feel bad. Anisha asks Mahima why can’t they talk about it now. She also asks Mahima if there is any problem if happiness will increase a bit more. Mahima asks Anisha to listen to what she says, once in a while at least. She says Anisha and Kairav’s marriage won’t be discussed today.

Kairav stops Anisha from objecting to Mahima’s decision. He says Mahima is right and Anisha and his matter can be discussed later on. Kairav also says that it’s Akshara and Abhimanyu’s special day today. Mahima smirkingly looks at Anisha. Anisha controls her anger. Aarohi notices everything. She thinks that she was planning to separate only lovebirds Akshara and Abhimanyu but it seems the whole family is on the verge of splitting.

In the next episode, Abhimanyu alone will ask Aarohi to enjoy her sister’s wedding but not try troubling or upsetting him and his Akshu. He will leave warning Aarohi that he won’t tolerate Akshara’s smile vanishing. Aarohi will think in her mind that this threat of Abhimanyu will prove very costly. Akshara will say yes to Abhimanyu for going on a dinner date with him.

Reviewed Rating for Yeh Rishta 11th March 2022 Written Update Aarohi spoils the fun: 3/5 This rating is solely based on the opinion of the writer. You may post your own take on the show in the comment section below.