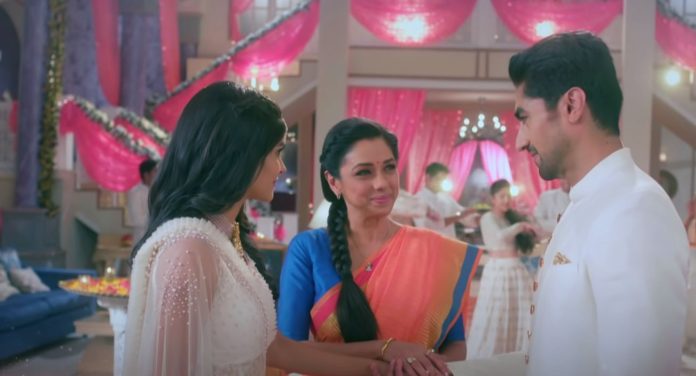 Anupama Yeh Rishta 26th March 2022 Merger Upcoming Twists Anupama Upcoming story – Anuj Kapadia’s deadly accident. Star Plus’ show Anupama is gearing up for some high voltage drama in its upcoming track. Anupama gets ready for her dance performance and waits for Anuj when her Alta bottle spills on the table and red liquid oozes from it. Anupama is shattered to see this scene and thinks that something wrong has happened with Anuj. She repeatedly calls Anuj’s name and goes into utter shock. The organizers are unable to pacify her and decide to inform her family members about her condition. Samar tries to call Anuj but is not able to reach him. Devika advises Samar that they should seek the police’s help.

On the other hand, police find Anuj’s car. Rakhi Dave asks Vanraj about Anuj missing from the scene. Baa prays that it will be better if Anuj doesn’t come. Vanraj informs Baa that Anuj’s presence is necessary to make Anupama dance. Anupama is seen coming on the stage with her head hung down. Two ward boys are seen taking a dead body in the ambulance. The policeman is heard saying that Anuj Kapadia’s family members have to be informed. Is Anuj Kapadia dead? Will the love story of MaAn remain unfulfilled once again? To find out stay tuned and keep reading this space for more such upcoming tracks.

The upcoming track of Yeh Rishta Kya Kehlata Hai will celebrate Abhimanyu and Akshara’s engagement. The atmosphere is very cheerful as our very own dance choreographer Anupama will be seen teaching Abhimanyu and Akshara dance steps for their ceremony. The Goenkas and Birlas have come together to shake a leg with the couple in the background. Abhimanyu asks Akshara why she isn’t wearing Naira’s earring and she replies that she may have lost it. Abhimanyu blames Aarohi for missing from the scene after vanishing the earrings. Akshara requests Abhimanyu to not doubt Aarohi.

Abhimanyu is not in the mood to listen and says that Aarohi can be their life’s biggest problem. Akshara leaves Abhimanyu’s hand in anger. Anupama comes to their rescue and advises Abhimanyu and Akshara that they will learn to fight after marriage but now it is the time to acknowledge their love. Anupama makes Akshara and Abhimanyu catch hands again and they realize their mistake. Will Abhira be able to live their fairytale love story? Will Aarohi’s actions land Akshara in trouble during her own engagement ceremony? Keep reading.