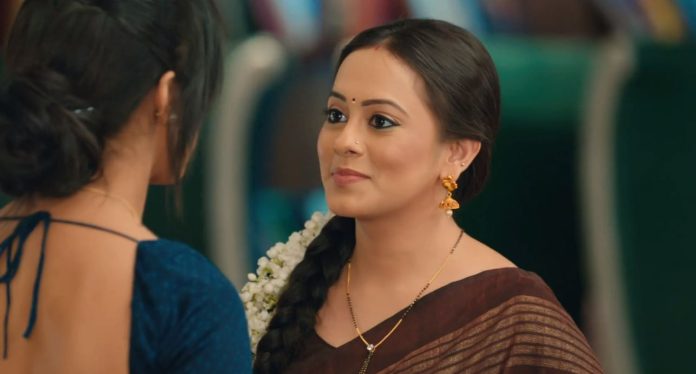 Yeh Hai Chahatein 23rd March 2022 Written Update Clever game A woman’s car hit Rudra’s car at the school’s main gate. Rudra and the woman come out of their cat. Woman apologizes to Rudra for hitting his car. She reveals to Rudra that she was in a hurry because her kids forgot their tiffin. In tension, she tells Rudra that her husband will get angry at her for getting his car hit. She says she couldn’t have left her kids without food. Rudra tells the woman that it’s fine as his car didn’t get damaged much. The woman tells Rudra that she is talking about her car.

She tells Rudra that her husband gets very angry, even on seeing a scratch on his car. Rudra asks the woman to not worry as her car got just a little scratch that too at the bottom of the car. He tells the woman that the scratch won’t even come in her husband’s notice. The woman relaxes and thanks god for saving her. She asks Rudra to drive carefully from next time. The woman asks the school guard to give tiffin to her kids. She drives off saying bye to Rudra. Rudra thinks about why these types of people always collide with him only. Ruhi hears some kids beating a kid and inside the classroom and the kid requesting to not beat him.

Ruhi recalls Prisha’s teachings to not stay silent if something wrong happens with anyone. She uses a peon’s phone to call Rudra. Rudra receives the call and asks her from where she is calling. Ruhi tells Rudra that she took the school peon’s phone to call him. She asks Rudra to come to school as soon as possible. Rudra asks Ruhi if she is fine. Ruhi tells Rudra that she is fine but there is an emergency, which she will tell him when he will come to school. She disconnects the call and thanks the peon. On the other hand, Saaransh and GPS meet Prisha outside Vaijayanti’s cabin. Prisha tells GPS and Saaransh that Vaijayanti didn’t do anything suspicious.

She tells GPS that she isn’t able to decrypt where Vaijayanti has hidden the gun. After thinking a little, Prisha, GPS and Saaransh decrypts that Vaijayanti would have hidden Venky’s murder gun in Srinivasan house. Prisha feels reluctant to go to Srinivasan house in angry Vasudha’s presence. GPS tells Prisha that Vasudha has gone to classical music class and won’t return until 2 hours. Prisha, GPS and Saaransh leave for Srinivasan house. At school, Rudra reveals to the principal that high school children are beating 5th standard children in their school. He says he won’t tolerate all this in their school.

They don’t find any clue or Venky”s murder gun in Srinivasan house. All three of them wonder what is happening. Prisha says they have to do something to get the truth out as she has her next hearing in one week. Vasudha suddenly returns home. She gets shocked and angry seeing Prisha at her house. Vasudha asks GPS why he brought their son’s murderer to their house. Saaransh tells Vasudha that she doesn’t know the truth that Prisha didn’t kill Venky. GPS tells Vasudha that Saaransh is right and they have proof that Prisha didn’t murder Venky. GPS tells Vasudha about the investigation he, Prisha and Saaransh did till now.

At School, Ruhi tells Rudra that she was telling the truth. She says she really saw the older children beating the 5th standard child. Rudra and Ruhi wonder why the 5th standard lied. Rudra explains to Ruhi that sometimes boys raise hands on each other in friendship and while playing. He takes Ruhi for an ice-cream. At Srinivasan’s house, GPS reveals to Vasudha that intoxicated Vaijayanti in front of him, herself accepted that Prisha didn’t murder Venky. He says Vaijayanti hid this truth for 5 years from everyone. GPS tells Vasudha that he is sure that Vaijayanti is intentionally trying to trap Prisha in Venky’s murder case.

Vasudha realizes her mistake and regrets cursing Prisha. Prisha apologizes to Vasudha for hurting her again. Vasudha hugs Prisha tightly and apologizes to her. She asks Prisha why she remained silent and suffered for 5 years. Prisha reveals that she remained silent for Rudra and Ruhi because of Vaijayanti. Saaransh tells Vasudha that Rudra is very angry with Prisha for hiding his daughter Ruhi from him for 5 years. Prisha says Vaijayanti is very clever and has hidden the truth from everyone. She also says that Vaijayanti kept seeing Rudra and Saaransh suffering. Vasudha asks Prisha how she will bring out Vaijayanti’s truth in front of everyone. Prisha tells Vasudha that Vaijayanti has hidden Venky’s murder gun somewhere which may belongs to her only. She also tells Vasudha that they need to find that gun as it’s the only proof of truth.

Prisha further tells Vasudha that they need to find the proof within one week as it’s her hearing after it. On the other hand, Rudra and Ruhi are seen eating ice-cream. Ruhi gets worried when ice-cream falls on her uniform. Rudra tells Ruhi that nothing is to worry about, as it’s not a big mistake. Ruhi tells Rudra that she has only one uniform and Prisha will scold her for ruining it. She tells Ruhi that she can’t make Prisha sad and will have to wash and dry her uniform in one night. Rudra recalls Prisha narrating a bed-time story to Ruhi about a princess. He also recalls Ruhi showing her old and torn night suit to Prisha and asking for a new night suit as well as school uniform. In the flashback, Prisha promised Ruhi that she will get her new night suit as well school uniform from her next salary.

Flashback ends. Rudra asks Ruhi to come shopping with him. Ruhi refuses telling Rudra that Prisha asked her not to take gifts from others. Rudra is about to blurt out to Ruhi that he is her father but stops. He asks Ruhi to help him in his shopping for his upcoming big conference. Ruhi agrees to help Rudra on his insistence. Rudra reaches the mall with Ruhi. He plans to make, Ruhi shop for her. According to his plan, Rudra sends Ruhi to the kids section to see clothes. A saleswoman rudely asks Ruhi to not touch clothes on the mannequin. She asks Ruhi to bring money to buy new clothes. Ruhi asks the saleswoman to let her see clothes as it doesn’t require money.

Rudra asks Ruhi to buy whatever she wants. Ruhi goes with the saleswoman. She tries on different cute and beautiful dresses. Rudra praises Ruhi’s choices. Fashion Ka Jalwa song plays in the background. Ruhi behaves just like a child model on the ramp. She comes outside after changing back into her school uniform. Rudra tells Ruhi that her choice is great. Ruhi says it’s because she is Prisha’s daughter. Rurda gets silent for a few seconds hearing this. He gets all the clothes Ruhi chose packed. Ruhi tells Rudra that Prisha will get angry. Rudra tells Ruhi that he will talk to Prisha. Ruhi tells Rudra that Prisha will scold him too.

Rudra tells Ruhi that he will tell Prisha that it’s a return gift to Ruhi from his side for helping him a lot in Rohtak. Ruhi still worries about Prisha’s reaction. Rudra tells Ruhi that no one says “no” for gifts. Ruhi happily hugs and thanks Rudra for gifting her so many dresses. They say, “I love you” to each other. Rudra kisses Ruhi’s forehead and both of them leave for home. Saaransh and Prisha return to Khurana Mansion. They get shocked, when Vaijayanti tells them that she got Prisha’s court hearing postponed to tomorrow (the next day).

In the next episode, Vaijayanti will make Prisha dizzy by making her eat the payasam she made. At school, the bad high school children will intentionally make Ruhi fall for complaining about them. Ruhi will ask the elder child why he made her fall. The elder child will smirk without showing his face to Ruhi. Ruhi will notice the elder child’s bracelet. According to her plan to trap Prisha, Vaijayanti will take out Venky’s murder gun to get unconscious/asleep Prisha’s finger prints on it.

Reviewed Rating for Yeh Hai Chahatein 23rd March 2022 Written Update Clever game: 2/5 This rating is solely based on the opinion of the writer. You may post your own take on the show in the comment section below.