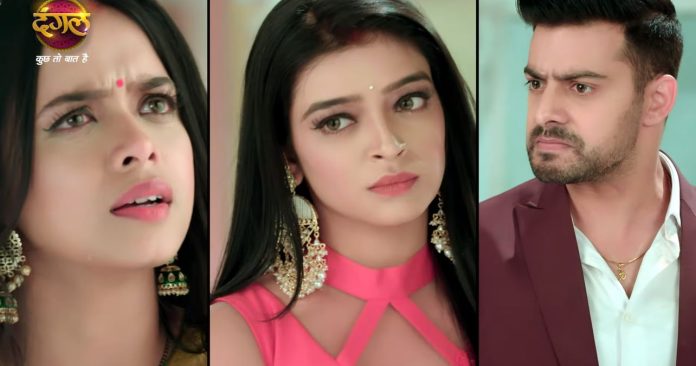 Rang Jaun Tere Rang Mein 24th March 2022 Written Update Dhruv gets informed by his manager that the meeting couldn’t take place because Dhaani didn’t come to meet the clients. Dhruv is shocked to know about the huge loss. He rushes home and confronts Dhaani. He shouts Dhaani’s name and shocks her. He asks her why did she tell that she will attend the meeting when she wasn’t going for it. He asks her to have shame and realize that her one mistake has left their 300 employees hungry for a day. He tells that he has to run the company which runs the houses of his employees. He tells her that she has done too wrong. He bursts his anger on Dhaani. He was thinking that everything is going on smooth, but Dhaani disappointed him. He calls her stupid.

He tells that she doesn’t worry for him, else she would have not done this. He tells that she first gave the 30 day challenge, and then when Shrishti came back, then Dhaani decided to share him with Shrishti. Dhaani is shocked to know this. Shrishti has lied to Dhruv about the disgusting thing of sharing their husband. Dhaani wants to clear his misunderstanding. Shrishti enjoys seeing their fight.

Also read, Mose Chhal Kiye Jaaye:
Armaan meets Simmi who comes to thank Soumya. She tells that she had come to apologize and thank Soumya, who has spared time and wrote the scenes to save them from the huge problem. She tells that everybody is praising Soumya for writing heart-touching emotional scenes in just a few hours of time. Armaan gets surprised to know this. He asks her if Soumya has written the scenes. Simmi confirms it. He goes to Soumya. She tells about a surprise. He tells that he doesn’t like surprises. She tells that he shouldn’t take tension, the shooting won’t stop, the changes has been made in the script, everybody likes the scenes a lot.

She wants to write stories for the episodes. Armaan gets jealous of her talent. He angrily breaks the glass. Soumya gets puzzled. He can’t accept that she gets the praise. Later, Soumya hears Armaan insulting her talent in front of his team. She can’t believe it that he is the same Armaan who loves her. Armaan is shocked to see Soumya witnessing his true side. How will Armaan come up with a clever lie to cheat Soumya again? Will Soumya ever understand Armaan’s true motives of ruining her dream? Keep reading.