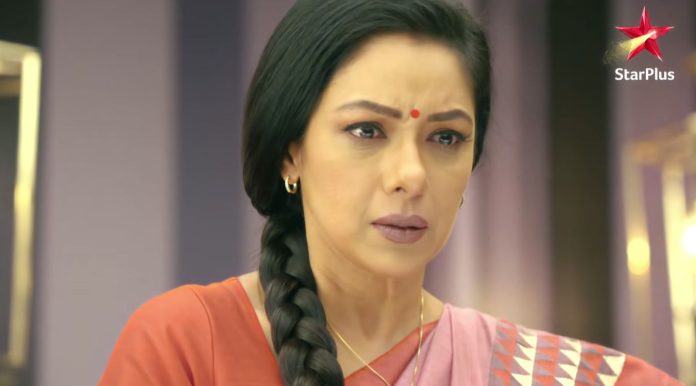 Anupama 28th March 2022 Written Update Distress twist Bapuji stands proudly with Anupama’s winning trophy in his hands. He tells Samar that love has won many times in this world but love won a trophy for the first time. Samar tells Bapuji that it feels that they brought the moon, not a trophy. Bapuji says a determined daughter always brings the moon with her. Samar and Bapuji discuss that including them, Dolly, Meenu, Sanjay, GK, Devika, Kinjal, Anuj and Anupama got teary eyed on Anupama’s announcement of her marriage with Anuj. Samar tells Bapuji that not only but everyone present in the audience got teary eyed.

He says MaAn’s confession is not a small thing. Bapuji explains to Samar that moments come and go in life but Anuj and Anupama’s marriage announcement moment turned into a trophy for him. He wipes the trophy and says that he will keep this moment safe with him forever. Vanraj overhears Bapuji’s words. He wonders why Bapuji is keeping Anupama’s winning trophy in Shah house as the trophy should be kept in Anuj’s house. Rakhi comes from behind and says it’s true. Vanraj asks Rakhi why she keeps coming behind him like a Vetaal/betaal.

Rakhi tells Vanraj that he is right as for real, she came to make Shahs life difficult. She stops Vanraj and asks him to see his defeat’s trophy for once. Vanraj says, he is quiet till now as just a trophy came till now. He asks Rakhi to see what he will do when Anuj and Anupama return. Rakhi tells Vanraj that she is very excited if Shahs dramatic episode is on the way. Vanraj asks Rakhi to be ready with popcorn as he has some other work to complete till then. Rakhi feels eager for Anupama’s return and Shahs drama. She thinks that this way she will get more reasons to take Kinjal to her home. Kinjal comes and tells Bapuji that it’s time for his medicines. Samar tells Kinjal that it’s time for her supplements too.

Kinjal feeds medicines to Bapuji and Samar feeds supplements to Kinjal. Kinjal thanks Samar. She sees Anupama’s trophy and says it looks good. Samar reveals to Kinjal that Bapuji gave a big speech while receiving Anupama’s trophy. Bapuji says he got this chance first to speak on stage and that too for Anupama. He says he couldn’t let the chance go away. Kinjal and Samar teases Bapuji for his long lecture/speech and incomplete poems. Bapuji asks Kinjal and Samar to not make fun of his speech. He says he will narrate his speech to Anupama also, on her return. Samar and Kinjal say, oh, no. Bapuji says shut up and all three of them laugh together.

He thinks how Anupama can become so selfish. Paritosh thinks that Shahs will have to deal with all the defamation as Anupama herself will leave with Anuj after marrying him. He says to himself that Baa is right that it’s not America, they will become a fun object and subject for society/neighborhood. Paritosh says Anupama always lectures him about values and now she is doing wrong herself. He thinks how he and Vanraj will meet people and talk to them as everyone will make fun of them. Paritosh thinks that his friends will make fun of him saying that he will soon become a father and will also have a step/new father himself.

He thinks about how to make Anupama understand. In the kitchen, Baa also feels the most angry with Anupama’s decision. She thinks she will teach Anupama a lesson on her return. Kinjal, Samar and Bapuji discuss how Baa, Vanraj and Rakhi are burning in anger and are ready to trouble Anupama. Samar plays Anupama’s sent voice note. Anupama tells Samar that Anuj stayed in Udaipur as his work is still pending. She says that she is on her way and will reach Shah house by night. Anupama also asks Samar to keep his phone in his hands as she doesn’t want to disturb anyone by ringing the bell. The voice note ends.

Bapuji laughs and says that tonight no one will be able to sleep. An angry Vanraj overhears everything. On the other hand, Anupama misses Anuj and wishes that he returns soon. She receives Bapuji’s message. In the message, Bapuji asks Anupama to return prepared as many people in Shah house are prepared to trouble her. Anupama recalls Pakhi, Paritosh, Vanraj and Baa’s angry and disappointed faces from the time when she announced her and Anuj’s marriage. Anupama says that she is prepared. At Shah house, Rakhi scares Kavya. Kavya requests Rakhi to instigate someone else as she is busy with her skin routine.

Rakhi tells Kavya that Vanraj is busy in work as Malvika gave him a month’s time to prove himself in the company. She also tells Kavya that she thought of sharing her sadness/griefs with her. Kavya tells Rakhi that she would have helped her in household chores if she really would have wanted to share her griefs with her. She reminds Rakhi how she explained to Kinjal that she shouldn’t work in the kitchen. Kavya asks Rakhi now what grief she wants to share with her as she vanished when she needed her. Rakhi tells Kavya that she came to talk about a woman’s sadness, wife’s insecurity and a daughter-in-law’s frustration etc.

Kavya asks Rakhi why she would feel insecure. Rakhi tells Kavya that wife’s security is connected to her husband’s career. She asks Kavya to think what will happen, if Vanraj fails in his last chance that Malvika gave him to prove himself. Rakhi asks Kavya what if Malvika ousts Vanraj out of her company or if Anuj and Anupama will angrily make Vanraj out of the Kapadia company. Kavya grows tense. Rakhi asks Kavya if all this becomes true, will she run away taking divorce from Vanraj. She tells Kavya that their basic nature is similar and thus she knows what the former thinks. Rakhi tells Kavya that she will forever suffer in between Anuj, Anupama and Vanraj’s fights. She instigates Kavya by telling her that everyone went happy on Kinjal’s pregnancy news but nobody thought that her age of becoming a mother is about to end.

She suggests Kavya to go away from Shah house and also offers financial help to her. While leaving from Kavya’s room, Rakhi thinks that she will finally break the Shah family, who snatched her daughter from her. On the other hand, Kinjal and Samar discuss that drama will start as soon as Anupama will return. Samar suggests or advises Kinjal to go and sleep instead of witnessing the drama and stressing herself. Kinjal asks Samar if he thinks that she would be able to sleep in all these situations. Samar asks Kinjal to think what Anupama would be going through thinking about the upcoming drama.

Kinjal tells Samar that Anupama is strong enough to give a befitting reply to everyone. She keeps her hand on her stomach and tells Samar that now she understands that mother gets weak when it comes to her children. Kinjal tells Samar that she is tensed thinking that Paritosh and Pakhi might force Anupama to change her decision to marry Anuj. Later, Bapuji tells Baa that he is not asking her to change her nature but to consider the situation or things. He asks Baa to not stoop so low that later on, she won’t even be able to stand up. Baa tells Bapuji that she won’t stay silent as Anupama also stooped very low. She says she will stoop if she will have to save her family from defamation. Baa says today she is a woman who wants to save her family at any cost.

Bapuji says today he is only a father who wants to save his daughter at any cost. Electricity goes off. Baa says the woman who filled the darkness in their life is about to reach the Shah house. Anupama on the other side thinks that in 10 minutes she will reach Shah house and a big drama will commence. She receives Anuj’s call. Anuj asks Anupama if she reached the battle ground. Anupama replies that she is just 10 minutes away. Anuj gives confidence to Anupama to fight everyone. Anupama tells Anuj that for the first time she will fight for them (her and Anuj). Anuj requests Anupama to make their love win this time.

Anuj apologizes to Anupama for not being able to be with her in her fight with her family and in her difficult time. Anupama tells Anuj that it’s a mother’s fight this time and mother’s have to fight their battle themselves. Anuj tells Anupama that he wants her to win this battle this time. Anupama tells Anuj that she will fight for sure as she has the right to her life and it’s not wrong to fight for own right. She says she will fight as she isn’t wrong. Anuj says he hopes that she won’t have to fight her dear/loved ones. Anupama says she hopes the same. Anuj wishes, “All the best” to Anupama.

Anupama reaches and enters the main gate of Shah house. She recalls Baa, Pakhi and Vanraj’s words against her marriage with Anuj. Anupama thinks that her new beginning is filled with darkness all over. In the next episode, Vanraj will tell Anupama that electricity went off with her auspicious steps. Anupama will tell Vanraj that he seems so sad like electricity fell down on him. Electricity will arrive and the whole family will be seen sitting in the hall. Baa will ask Anupama if love made her so mad that she became shameless and insolent. Anupama will confidently tell Baa that she has become mad in Anuj’s love. This will shock everyone. Pakhi will tell Anupama that they are getting embarrassed because of her. Anupama will tell Pakhi that her happiness is an embarrassment for her.

Reviewed Rating for Anupama 28th March 2022 Written Update Distress twist: 5/5 This rating is solely based on the opinion of the writer. You may post your own take on the show in the comment section below.