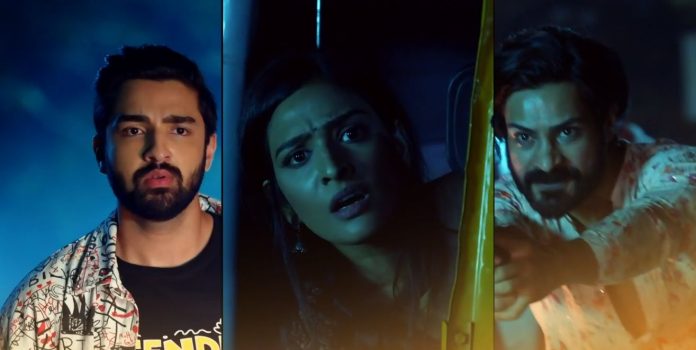 Bhagya Lakshmi 28th March 2022 Written Update Huge twist Neelam is miffed that Rishi isn’t listening to her because of Lakshmi. She starts hating Lakshmi who has snatched her Rishi. Karishma brainwashes Neelam more against Lakshmi so that Neelam should never ever accept Lakshmi for Rishi. She asks Neelam to bound Rishi by getting him married to Malishka. Malishka calls Rishi and thinks he is with Lakshmi. She tells that she knows it well that Lakshmi is also with him, Lakshmi should at least greet her. Rishi tells her that Lakshmi isn’t in the car, he couldn’t find her till now, if he found her then she would be sitting in the seat where Malishka is imagining her.

He asks Malishka to let him just go and find Lakshmi. Balwinder argues with Ayush and Shalu. He asks Shalu to talk to him well, because he will soon become her Jija ji. Ayush hits him and shouts that Lakshmi is just of Rishi, they both love each other and will always stay together. Inspector Rakesh finds out that Balwinder is the kidnapper, who has kidnapped Shalu. Rano receives a shock in tension that even her name will be known. Virender and Pritam get worried for Lakshmi and Shalu. Rano informs Balwinder that the police is searching for him, after realizing that he is Shalu’s kidnapper. She coughs as a reaction to the shocking find.

Virender asks why did she cough suddenly. Rakesh tells that it means Rano is also involved in the kidnapped, she knew about Balwinder’s plans and helped him. Pritam is shocked. Rano makes an excuse. She asks him to run away somewhere or commit a suicide. Lakshmi drives an auto rickshaw to reach the cliff where the kidnappers called her. Lakshmi and Rishi reach the cliff side, where Balwinder brings Ayush and Shalu. Rishi is shocked to see Balwinder, and so is Lakshmi. They both find Balwinder aiming the gun at them. Will Lakshmi save Rishi from this upcoming danger. Keep reading.

Shalu scolds Balwinder for threatening Lakshmi. She makes fun of Ayush and asks him to never come to save her. Balwinder asks her is she mad, Ayush has come to save her, she should thank him. Ayush asks her to learn it from Balwinder. She tells that Balwinder is the goon. Ayush tells that Balwinder is Shalu’s kidnapper, Balwinder should let her go home. Shalu tells that she got fooled because of Guddu. She scolds Balwinder. Balwinder asks her who is she, she should have some shame, he is her would be Jija ji. Ayush hits him and tells that Rishi Oberoi is Shalu’s Jija ji and Lakshmi’s husband. Rakesh checks the pictures of the family members. He asks Bani if anything strange happened.

Rano and Neha tell that nothing strange happened. Bani tells that Binni informed them that someone was staring at Lakshmi, Shalu and her. Rano tells that it’s a chawl, and such things happen. Rakesh asks her if anyone has come to live in the chawl. Pritam tells that Balwinder has come back, but he has no motive to kidnap Shalu. Balwinder and Ayush get into an argument. Shalu beats Ayush and asks him not to act heroic. Balwinder tells that he will not spare Ayush. Shalu and Ayush get arguing. Ayush tells that he doesn’t want to sit with Shalu, she is mad. Bablu tells that she makes everyone mad.

Ayush thanks him for understanding. He catches Bablu and asks Shalu to run away. The goons point guns at them. Shalu tells that they can’t run away this way. Ayush tells that they will plan something else. Rakesh tells that Balwinder is the kidnapper. Rano coughs. Even Neha coughs. Pritam asks Rano is she okay. Virender tells that cough spreads so soon. Rakesh shocks her saying she knows about the kidnapper. Rano stops coughing. Rakesh tells that it’s a shock therapy. He has to find out where did Balwinder call Lakshmi. Pritam tells that Lakshmi has gone to give him money. Virender tells that Balwinder is a dangerous man. Rakesh asks him not to worry, the team will track Balwinder and nab him in an hour. Rano gets stressed.

She goes to call Balwinder. She informs about Virender who called Inspector Rakesh and learnt about Balwinder’s crime. He asks her not to worry and just call him to alert about the police. Rano wants the money. Neelam cries that her son had gone against her. She tells that Rishi used to always listen to her, but now he had gone against her because of Lakshmi. She accuses Lakshmi. Dadi asks Neelam not to blame Rishi and Lakshmi, who is still their bahu. She tells that Rishi has gone to help Lakshmi, being a good person and a good husband, he didn’t do anything wrong. Neelam tells that she raised him with such values that he always helps everyone. She tells that he should not help anyone who she dislikes.

Dadi asks her does she not like Lakshmi. She asks Neelam to say it again. Neelam tells that she dislikes Lakshmi. Karishma argues with Dadi stating that Rishi shouldn’t insult Neelam because of Lakshmi. Dadi rebukes Karishma for instigating Neelam. Neelam tells that Karishma didn’t say anything wrong. Malishka makes a video call to Rishi and says I love you to him. He asks her what is she saying at this time. She asks is Lakshmi there with him. He understands her insecurity.

He tells her that Lakshmi isn’t in the car, he didn’t find her yet. She apologizes. He tells that she doesn’t mean the sorry. She angrily throws things. Sonia pacifies Malishka. Malishka tells that Rishi disconnected her call, he is really driving her crazy, all because of Lakshmi. Balwinder wants Lakshmi to come fast and give them the money. He asks Shalu does Lakshmi know car driving. Ayush smiles and tells that he knows who is in the car, its Rishi, maybe Rishi and Lakshmi have come along. Balwinder asks his goons to shoot Ayush if he acts smart. Ayush and Shalu promise that they won’t do anything. Rishi gets the money bag. He sees Balwinder and his goons. He gets angry at him.

Balwinder tells that he is a hero for Lakshmi, he will get his heroine today. He wants Lakshmi. He asks Rishi to call her. Lakshmi tells the auto driver that she will drive the auto. He asks her who had taught her to drive an auto. She tells that she learnt it on her own because of a goon. Rishi tells that Lakshmi didn’t come with him, he has come to find her. Balwinder doesn’t believe him. Rishi asks him to believe him. He tells that he has come to save Shalu. Ayush wants to tell that he is also stuck. Balwinder asks Rishi did he get the money. Rishi shows the money bag. Rakesh tracks Balwinder’s location. He leaves with his team. Virender accompanies Rakesh. Will Oberois save Lakshmi and Shalu from Balwinder? Keep reading.

Reviewed Rating for Bhagya Lakshmi 28th March 2022 Written Update Huge twist: 5/5 This rating is solely based on the opinion of the writer. You may post your own take on the show in the comment section below.