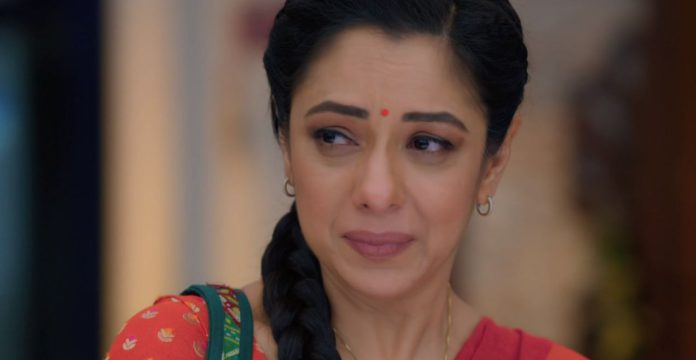 Anupama asks Pakhi and Paritosh what type of people they are, that they cry seeing other people’s problems on the internet who are living abroad but they can’t see their own mother’s pain who is living with them in the same house. Still Anupama’s non-supports in the Shah house remains unaffected by her words. Anupama asks Rakhi who she is to point fingers or raise questions at her as she herself doesn’t give respect to her own husband, Pramod. She asks Rakhi to learn to behave as she is also going to become a maternal grandmother. Rakhi shouts in anger.

She announces that she never left any stone unturned to fulfill all the wishes and needs of the Shah family, but now enough is enough. She says now she has no regret, doubt and complaints. Anupama says she did more than she could have done for the Shah family but now whatever she will do, will do for herself. Bapuji, Kinjal and Samar and Mamaji feel relaxed and proud of Anupama. On the other hand, Anuj is seen talking to GK on a call. GK asks Anuj if he doesn’t feel scared. Anuj confidently tells GK that now he is sure that Anupama will fight the whole world for him.

He tells GK that he knows that usual semicircle fights and taunts will happen at Shah house. Anuj also tells GK that this time Anupama went to give a befitting reply to Shahs, not to hear their nonsense. He further tells GK that he is tense that Anupama doesn’t feel alone after defeating her non-supporters as a human feels bad after defeating their loved ones. Pakhi and Paritosh start threatening Anupama but she stops them. She completes their threats by telling them that she knows that Pakhi would stop talking to her and Paritosh won’t let her (Anupama) keep any relationship with his and Kinjal’s upcoming child.

Anupama tells shocked Paritosh and Pakhi that their thinking and blackmail is so small. She says that she would have cried badly hearing all this if she would have been old Anupama. Anupama also says that she will cry and feel bad now also but won’t let them know how badly their words affected her. She confidently says that she won’t get blackmailed. Anupama further says that she understood that once a person gets blackmailed, he/she will have to get blackmailed his/her whole life. Anupama asks her non-supporters if they know who made her so intelligent to understand people’s evilness, cleverness and controlling nature. She says it’s not Anuj’s love that made her wise but their (her non-supporters) ungratefulness and taunts towards her that made her wiser.

Everyone gets shocked. Anupama tells Paritosh that she has now learnt to fight for her own rights and now she will for sure get her rights on her upcoming grandchild. She asks Pakhi to keep hating her as she will for sure express/show her motherly rights to her and no one can stop her, not even Vanraj. Anupama declares that no one can stop her because she isn’t wrong. She also tells everyone that they all are wrong, not her. Anupama calls her non-supporters an embarrassment for her. She says that she regrets stopping herself, Anuj and their hearts for selfish people like them (her non-supporters).

Anupama says that she sacrificed her dreams and desires for her family and they worry, care and think about society people more than her. She further says, “Duniya ka sabse bada rog, kya kahenge log”. Anupama says she won’t let anyone else take decisions for her life. She also says that she will respect herself and doesn’t care if anyone doesn’t. Anupama further says she will always live and fight for her self-respect. She tells everyone that she isn’t some stuff but a human and wants to be treated and live as a human only. Anupama tells her children that they may not remember her in their happiness but in sadness and problems even the strongest and biggest person remembers and calls their mother.

She says everyone remembers their mother even before remembering God in difficult situations. Anupama tells Baa that she will also surely remember her only in difficult times. Vanraj asks Anupama if she is self-praising herself. Anupama angrily says she is telling her worth to everyone. On the other hand, Anuj wishes that he should have been with Anupama in her fight. He tells GK that this fight of Anupama is with her own family and she will have to fight it herself. GK tells Anuj that he fears Anupama may accept defeat in front of her family’s stubbornness/adamance. Anuj tells GK that according to him, Anupama will never let her love get defeated.

GK says he hopes the same. Anuj tells GK that he trusts his love Anupama. At Shah house, Baa asks Anupama if Anuj became more dear to her than them. Anupama asks Baa if Shahs are her loved ones then why they are coming in her way of happiness. She also asks Baa if they consider her their family, then why their heart didn’t break seeing her tears. Anupama further asks Baa, if she ever once tried putting her happiness above her own happiness. She tells Baa that she never ever thought of her happiness. Anupama says that her status is very low in Paritosh and Pakhi’s eyes, even below their shoes.

She tells Baa that she even cares for saree more than her (Anupama). Anupama tells Shahs that even Rakhi is better than them as she is outspoken in front of everyone’s face. She says her loved ones give her pain only. Anupama tells Baa, Pakhi and Paritosh that she has realized now that they won’t ever understand her, even if she will try making them understand by taking another life. She says this mother got defeated today as no one wants to understand a mother. Flashbacks of Shah’s ill-treatment towards Anupama is shown. Anupama says enough is enough.

She says in every house a mother faces this ill behavior and is always asked to make sacrifices for others. Anupama says family and society suffocates women to show greatness and make sacrifices. She tells everyone that she doesn’t want to become so selfless that anyone could suffocate her. Anupama tells everyone that she loves them but won’t let them use her love for them to blackmail her. Anupama says she won’t make any more sacrifices for anyone. She further says she has respected everyone enough but now she will surely get married.

Anupama’s confident announcement shocks and angers her non-supporters. Mamaji, Samar, Kinjal and Bapuji clap with teary eyes for Anupama. Anupama grows emotional. In the next episode, Bapuji will light a diya and announce that his daughter, Anupama will surely get married and bid-farewell to Shah house. Baa will curse that some untoward incident will surely occur in Anupama’s marriage. Anupama will get shocked and worried.

Reviewed Rating for Anupama 30th March 2022 Written Update Bold decision: 3/5 This rating is solely based on the opinion of the writer. You may post your own take on the show in the comment section below.