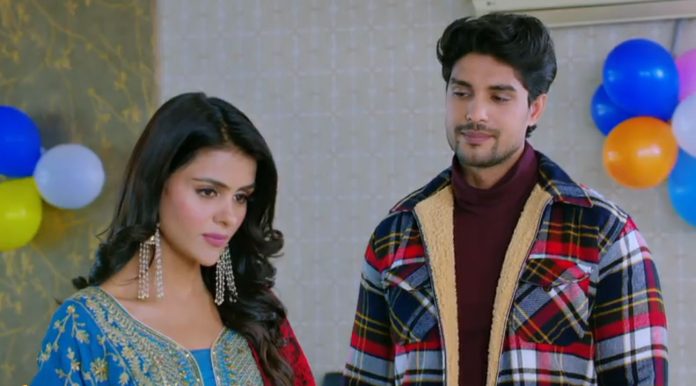 Udaariyaan Fatejo in danger 2nd April 2022 Spoilers A man tells that the Panditji is a fraud and is currently serving in jail. The disciple of the panditji denies it and says that he is god for them. She says that he must have got some misunderstanding because whatever Bababji says is always true. This is the same fraud Panditji who Jasmine had bribed for creating fake horoscopes of Tejo and Fateh. Tejo and Fateh are happily roaming together when a big sack is about to fall on them. Satti shouts Tejo’s name in shock. Will Tejo and Fateh get injured?

Jaswanth hands over the papers of the land to Gurinder. Parineet is left alone by Gurinder on her Mooh Dikhai. Jaswanth’s sister-in-law tells him that Gurinder got Rajeev married to Parineet to get their land. Rajeev tells Gurinder that if Chachi tells Parineet about their plotting then she will finish the marriage and go. Chachi goes to Parineet and tells her that she needs to speak to her about something important. Jaswanth, Rajeev, and Gurinder come running to the house and see Chachi hugging Parineet. Is Parineet aware of Gurinder and Rajeev’s greed?

Banni goes to Yuvan’s house to deliver food. Yuvan’s grandfather asks Banni if she remembers the order. Banni replies that she has Lord Shiva’s blessings. Yuvan’s grandfather reminds Banni that he has not paid 3 times more money to just make and deliver food but also feed it and go. He tells Banni that Yuvan hates food. Banni goes to Yuvan’s room and opens the tiffin. Yuvan is a mentally challenged boy and he throws the food. Banni feels sorry for Yuvan. She assures Yuvan’s grandfather that she will come back tomorrow and feed Yuvan. Banni mentions that she will bring Dal Bati Churma, Gatte ka saag, and mother’s love for free. Will Banni be able to keep her promise and feed Yuvan?

Kaju is forcefully taken to marry as she has spent a night with a man. According to the rule if a girl spends a night with a man then she has to marry. Kaju gets a choice to either reveal the boy’s name or get married to a guy she doesn’t like. Kaju says no to marriage. An old man asks Kaju where was she last night and with whom. Kaju doesn’t say anything. He is about to kill her when Neel stops him. Neel informs that last night Kaju was with him and she saved his life. Neel declares that if marriage is so important then he will marry Kaju. He applies indoor to Kaju. Kaju is left shocked. Will Kaju be happy with Neel who is unknown to her?