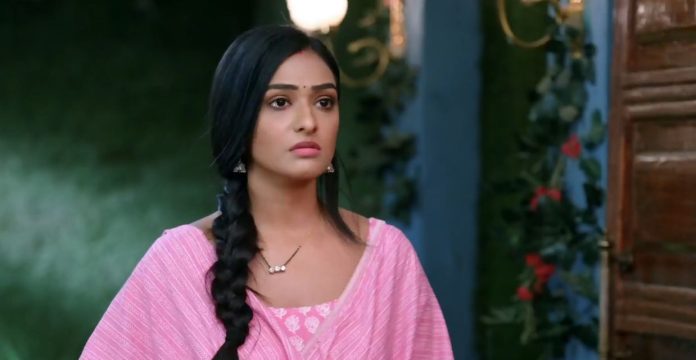 Bhagya Lakshmi 4th April 2022 Written Update Lakshmi returns Rishi and Ayush are on the way. Ayush smiles seeing him wait for Lakshmi’s call. Rishi denies it. He tells that Lakshmi has a bad habit, she isn’t calling him, when everything has become fine. Ayush jokes that out of sight means out of mind. Rishi tells that Lakshmi is different, her personality is different, she is moody, she talks sweetly and sometimes like strangers. Ayush asks him why is he talking like a moody husband. Rishi asks him to just drive. He asks Ayush why did he go to save Shalu. Ayush asks him not to trouble. He tells that he will call Lakshmi and tell her that Rishi is missing her. Rishi stops him. Ayush asks him what is he thinking. Rishi tells that he is really missing Lakshmi, he is waiting for her call.

Ayush is happy for Rishi. Malishka blames Lakshmi for the fatal risks on Rishi. Rishi and Lakshmi meet and get happy. Malishka tells Neelam that Lakshmi is the reason for Rishi’s problems. Karishma tells that Lakshmi is his Kaal. Malishka gets the pandit who testifies that Lakshmi shouldn’t be with Rishi. Lakshmi arrives home. Neelam gets informed about her, and goes to stop her. She rebukes Lakshmi. She asks Lakshmi not to dare come inside her house. Rishi confesses to Ayush that he likes to spend time wit Lakshmi.

Earlier in the show, Shalu tells Bani that she had seen Lakshmi and Rishi’s love, Rishi worries for her and can’t see her in trouble, even she loves him a lot, its commitment of lifetime. Malishka asks Neelam not to let Lakshmi come home. Lakshmi stops at the temple. She prays for Rishi. She faces a bad omen. She wonders if anything wrong is going to happen. Malishka tells Neelam that Lakshmi is a destroyer, she is a problem, she isn’t saving him from the Kaal, but inviting the Kaal. Neelam asks her what nonsense is she saying. Malishka tells that she will get a proof. Lakshmi prays to Mata Rani and sheds away all her negative thinking. She lays trust on Matarani and gets relieved.

Rishi tells Ayush that Lakshmi didn’t call him. Ayush tells him that maybe Lakshmi didn’t call him because of Malishka. Rishi tells that it doesn’t matter, Lakshmi should have called by her rights, after all she is his wife. Ayush likes it when he calls Lakshmi his wife. Malishka meets everyone and tells them that her dad has suggested to meet pandit Devendra. She tells them that she has told the pandit about the attacks on Rishi. She hints that Lakshmi is always with Rishi when he gets into a threatening situation, Lakshmi is with him when he gets attacked, she isn’t protecting him, she doesn’t fight with any Kaal, but she is the Kaal herself. Dadi asks her what nonsense is she saying.

Kiran asks Dadi and Neelam to talk to the pandit. Karishma asks Neelam to know the logical explanation, that Lakshmi is Rishi’s Kaal. Pandit tells that their pandit Badrinath told wrong about them, Lakshmi has no strength to save Rishi, her stay with Rishi will be more dangerous for him, she can’t save him. Neelam tells that she will talk to Badrinath and confirm it. Malishka asks her why is that needed. Neelam tells that she will talk to him first. Lakshmi is glad thinking of Rishi’s words. She stops at the signal. She gets to see Rishi. She shouts to him. Her voice doesn’t reach him. He turns towards her and gets to see her. He smiles seeing her. He doesn’t want Ayush to see him waving to her.

Rishi and Lakshmi see each other. He ignores her and goes home. Lakshmi thinks Rishi ignored her, as if he thought he is dreaming. Malishka recalls Kiran telling about the pandit Devendra who can help them. Malishka then bribes the pandit. Pandit agrees to lie about Lakshmi’s Kundali. He tells Neelam that she has to keep Rishi away from Lakshmi’s shadow if she wants Rishi alive. Lakshmi comes home.

Lakshmi tells the servant that she is the house bahu. He tells that he will inform Neelam and come. Lakshmi waits for Neelam. She thinks of Rishi. Neelam summons Pandit Badrinath home. Servant informs her that Lakshmi has come home and claiming to be the real bahu of the house. Neelam tells that she has to meet Lakshmi. Neelam goes and stops Lakshmi from entering the house. Lakshmi tells her that she has come to stay with Rishi, she doesn’t want anything in return. Neelam tells her that she isn’t ready to accept her in the house.

She tells that Lakshmi isn’t right for Rishi. Lakshmi asks her what is she saying when she herself called her home before. Lakshmi apologizes to her. She tells that she wants to stay with Rishi, so that nothing wrong happens with him. Neelam asks her did she decide this herself. She calls Lakshmi disobedient for forcibly returning to the house. Lakshmi pleads with her. She wants to stay with Rishi. Neelam tells that her answer is still no. She asks Lakshmi to leave. Dadi cries for Lakshmi. Lakshmi apologizes and tells that she won’t leave, she has to protect Lakshmi from every danger and she has to be with him. She reminds that she was with Rishi when he had fallen in danger, she was always with him and saved him.

She also feels that some power brings them together. She tells her that Rishi and she are made for each other. She asks Neelam to let her stay in the house for one year, she wants to stay by her own wish for one year, with Rishi and for him. She recalls her marriage with Rishi and enters the house. Neelam stops her and throws her bag outside the house. She drags Lakshmi outside. She asks her to save her self esteem and not come back home. She shuts the door on Lakshmi’s face. Lakshmi gets upset. Neelam tells Malishka that she has thrown Rishi’s Kaal outside the house and now everything will get fine. Malishka gets a victory and smiles.

Reviewed Rating for Bhagya Lakshmi 4th April 2022 Written Update Lakshmi returns: 4/5 This rating is solely based on the opinion of the writer. You may post your own take on the show in the comment section below.