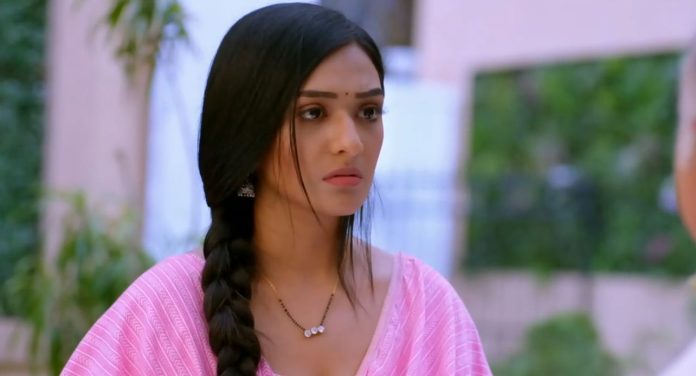 Bhagya Lakshmi 5th April 2022 Written Update News for Lakshmi Pandit Badrinath meets Lakshmi and asks her why did Neelam call him home suddenly. He tells her that he was going to come to inform Neelam about the trouble going to affect Rishi after two days. He asks if Neelam got to know about the Markesh dosh being at its peak. Lakshmi is stunned to know this. She wants to save Rishi. She asks Pandit to meet Neelam. She takes him home, while Neelam starts suspecting his loyalty and predictions. Pandit Devender brainwashes Neelam and tells that Pandit Badrinath can do anything for money, he is falsely testifying to make money from Oberois and maybe someone has stopped him from saying the truth. Neelam gets angry. She asks Pandit Badrinath how much money has Lakshmi paid to him.

He tells her that he was saying the truth to help her save Rishi. He asks Neelam to save her son Rishi and informs about the upcoming threat. He leaves from there, while Lakshmi stops him to ask for some solution. He asks her to be with Rishi, because his life will get threatened after two days. Lakshmi determines to protect Rishi. Rishi reaches his office. Neelam asks Malishka to meet Lakshmi and make her sign the divorce papers. She wants Rishi and Lakshmi to get divorced as soon as possible. Kiran and Karishma are glad to see Neelam’s support to Malishka.

Earlier in the show, Lakshmi recalls her marriage with Rishi and enters the house. Neelam stops her and throws her bag outside the house. She drags Lakshmi outside. She asks her to save her self esteem and not come back home. She shuts the door on Lakshmi’s face. Lakshmi gets upset. Neelam tells Malishka that she has thrown Rishi’s Kaal outside the house and now everything will get fine. Malishka gets a victory and smiles.

Rishi gets hurt when his finger gets inside the car door. He asks Ayush why was he so lost. He acts dizzy. Ayush calls him a drama king. He tells that he was not lost. He asks Rishi to promise that he won’t get angry. Rishi promises him. Ayush tells that Rishi confessed that he misses Lakshmi, Rishi called her his wife. Rishi confesses that he wants Lakshmi to stay around him, he wants Lakshmi to scold him and fight with him. He tells that he feels that Lakshmi should come back to him, he really misses her a lot. Ayush hugs him. Badrinath meets Lakshmi and alerts her about the new threat on Rishi because of the Markesh Dosh. She worries knowing that the coming week is going to be troubling for Rishi.

He asks her to be with Rishi and protect him, because her Kundali is strong and she can save his life. He tells that he told the Oberois to get her married to Rishi, after seeing her Kundali. He blesses Lakshmi. She asks him to tell the same to the family. He tells that Oberois already know it. Lakshmi determines to be with Rishi. Rishi wants Lakshmi to call him. He thinks to call her, but stops himself until he finds a suitable excuse to tell her. He thinks to go and meet her. Devender tells Neelam that Rishi has a threat because of Lakshmi, his Kaal attacks him for this reason.

Malishka and Karishma accuse the pandit for making Neelam donate gold and assets by brainwashing her. He tells them that he really worries for Rishi, he didn’t make any profits, he is true. Neelam asks him to leave. She rebukes Lakshmi for being a curse for Rishi. She tells that Lakshmi is inauspicious for him, she is bringing Kaal for him. She asks Lakshmi to go away. Devender meets Badrinath and accuses his intentions for the big mistake.

Badrinath tells that he won’t take the humiliation. He pities Neelam. He tells that she is cheating himself, the truth isn’t scared of anyone. He lectures her and asks her to save her son. Sonia and Kiran ask Lakshmi to leave. They humiliate her. Lakshmi wants to meet Rishi. She learns that he isn’t at home. She apologizes to Badrinath. He tells that nobody knows the wheel of time. He asks her to prove herself and do her duties always. Lakshmi tells that its her family. Badrinath tells that Malishka would have got Devender to lie to the family. He asks Lakshmi to be strong and fight for Rishi’s life.

Reviewed Rating for Bhagya Lakshmi 5th April 2022 Written Update News for Lakshmi: 4/5 This rating is solely based on the opinion of the writer. You may post your own take on the show in the comment section below.