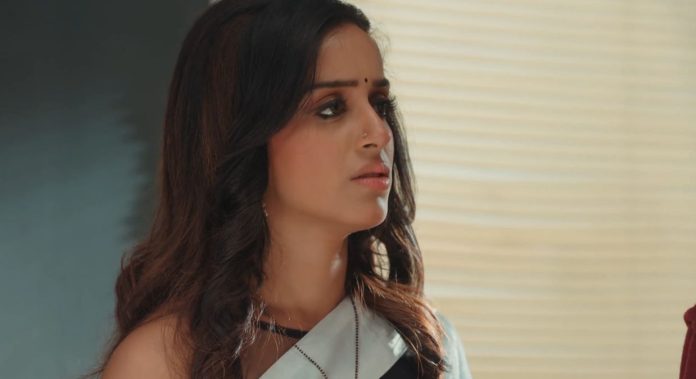 Yeh Hai Chahatein 5th April 2022 Written Update Prisha stunned Saaransh comes to drop Ruhi at school. When Ruhi doesn’t get down from the car, Saaransh asks her what happened. Ruhi tells Saaransh that Prisha asked her to be brave and strong but she doesn’t want to go to the school. Saaransh asks Ruhi, did anything happen again. Ruhi tells Saaransh about how someone scared her with a fake snake. She also tells Saaransh how Aaliya calmed her down by explaining to her that someone played a prank on her. Ruhi says Prisha asked her to not fear the wrong person and instead fight against them.

She tells Saaransh that the problem is that she doesn’t know who is doing wrong to her. Ruhi says she is afraid of going to school. Saaransh tells Ruhi that he will be near her in the school. Ruhi tells Saaransh that he will get annoyed. Saaransh tells Ruhi that he doesn’t mind getting annoyed to solve his younger sister’s problem. Aaliya meets Ruhi outside her car. Saaransh also gets out of the car and gets mesmerized seeing Aaliya. Ruhi introduces Aaliya and Saaransh to each other. Both Aaliya and Saaransh shake hands. “Ek Ladki Ko Dekha Toh Aisa Laga”, plays in the background.

Aaliya tries taking her hand back from Saaransh’s hand, but lost in Aaliya, Saaransh doesn’t let her. Ruhi understands Saaransh’s feelings. She gets Saaransh back to his senses and tells him that it was Aaliya, who saved her from the washroom incident earlier. Saaransh leaves Aaliya’s hand and thanks her for helping his little sister Ruhi. Aaliya tells Saaransh that there is no need to thank her as Ruhi is very sweet. She leaves asking Ruhi to meet her in school. Seeing Saaransh waving bye to Aaliya like a lover, Ruhi understands that her brother has started liking Aaliya.

Both brother and sister leave for school. On the other hand, the hotel manager asks Yuvraj to pay the room rent or leave and find another hotel. Yuvraj threatens the manager to kill him. The manager also threatens Yuvraj to get him beat by goons. Yuvraj pays the manager to save himself. Yuvraj wonders how he will survive as he gave last left cash to the hotel manager and can’t even use his debit or credit card because of the fear of getting tracked by police. He says that Rudra and Prisha have ruined his life. Yuvraj decides to teach a lesson to Rudra and Prisha.

Prisha meets Revathi outside the school. Revathi tells Prisha that she is doing her daughter’s project, who studies in Khurana school. She says she promised her daughter that she will finish her project before the last date of submission, that is today. Prisha starts helping Revathi in her daughter’s project. Revathi says her daughter won’t get angry with her today as the project is made good. Prisha says she is also a mother and knows that a real mother can go to any extent for her children. Revathi asks Prisha what she is doing here. Prisha tells Revathi that her daughter also studies in Khurana school and she is a doctor here.

Prisha asks Revathi what she does. Revathi receives someone’s call and tells the person on the other side of the call that she is coming soon. Seeing Revathi worried, Prisha asks her what happened. Revathi leaves telling Prisha that she needs to leave urgently for some important work. She also handovers her daughter’s project to her driver asking him to give it to her daughter in her classroom. Revathi immediately leaves in her car. Prisha wonders how Revathi’s sweet nature changed suddenly. Dev and his friends smirk seeing Prisha entering her cabin. A female student comes and tells Prisha that her stomach is in pain. Prisha feeds the medicine to the kid. She also gives chocolate to the kid.

Another female student comes to Prisha and she feeds medicine to her and gives her the chocolate. After this a male student comes to Prisha with a wound in his hand. She applies ointment to the kid and gives him the chocolate kept on her table too. Evil Dev and his friends smirk thinking that they trapped Prisha and its effect will appear in the next 10-15 minutes as per their plan. Many kids start vomiting and feeling unwell. Saaransh meets Prisha and informs her that she has decided to take admission in Khurana school. Prisha asks him why. Saaransh thinks that he can’t tell Prisha that he wants to be near Ruhi to save her from the people who are troubling her in school. He thinks Prisha will panic knowing this.

Saaransh tells Prisha that he decided to take admission in Khurana school as he wants to spend as much as possible time with her and Ruhi. Prisha tells Saaransh that it’s a great idea. She asks Saaransh if really this is the reason, nothing else. Saaransh says nothing else. Prisha says she will talk to the principal today only. Three teachers come to Prisha with many students feeling unwell. Prisha says all these came to her and she fed them the medicines, now what happened suddenly to all of them together. Prisha starts examining the students. Principal comes worried. Prisha tells the principal that they need to take all these students to the hospital.

Principal and Prisha take all the students in an ambulance. Saaransh follows them in his car. Dev and his friends smirk seeing their plan of trapping Prisha, working properly. Dev says now Prisha will fear messing with him. At the hospital, Rudra meets Prisha and asks Prisha how the kids went unwell. Doctor comes and tells all the children were drugged. He says all children are coughing badly, because drugs got spread throughout the kids whole body. The doctor also says that the situation would have gotten out of control if kids weren’t brought to the hospital on time. This shocks school staff present at the hospital.

Rudra, Principal, Saaransh and Prisha go to question how they got drugged. All the children say that they ate Prisha’s chocolates at last. This worries and shocks Rudra, Prisha, Saaransh and the principal. Peon tells Prisha that the chocolates she gave to children made the kids sick. Rudra gets angry and asks the peon if he means to say that Prisha drugged the kids. Peon asks Rudra what else might be the case. Rudra gets angry. Prisha calms Rudra. The principal says they will get to know the truth by getting the chocolates kept in Prisha’s cabin tested by forensic experts.

Later, a forensic expert is seen testing the chocolates kept in Prisha’s cabin. He says the chocolates contain drugs that are found in the school students’ bodies. This shocks Prisha, Rudra and Saaransh. Dev and friends smirk seeing that they finally trapped Prisha for messing up with Dev. Prisha says how is this possible as she gives these chocolates to kids daily and nothing like today ever happened. Rudra gets angry at the forensic expert and asks him to check carefully as Prisha is not the person who can ever hurt anyone, especially kids.

Forensic experts tell Rudra that he examined chocolates in front of him and the results came positive. Principal says he will have to call the police as per school protocols. This shocks and worries Rudra, Saaransh and Prisha. Dev gets happy and thinks he wished to do this only with Prisha. Flashback shows Dev taking Prisha’s cabin keys by scaring the peon. He tells his plan of trapping Prisha to Tarun and Vicky. Dev asks Tarun to exchange Prisha’s cabin chocolates with his brought drugged chocolates of the same brand. Tarun gets scared and asks Dev why he should do this. Dev reminds Tarun that his father works under his father and he can make his father fire Tarun’s father.

Helpless Tarun does as Dev says. He secretly exchanges Prisha’s cabin chocolates with drugged chocolates. As per Dev’s plan, he hides a drug packet in Prisha’s cabin drawer. Flashback ends and Dev praises Tarun. Saaransh requests the Principal to not call the police. He reminds the Principal that Prisha loves kid and saved them from bus incident and school bomb blast too. Dev secretly signs the principal to not grow emotional. The helpless principal remains adamant to call the police. He tells Saaransh that they can’t take such a serious matter silently. Saaransh seeks help from Rudra. Rudra says they need to call the police. Dev smirks hearing this.

In the next episode, Rudra will explain to Saaransh that being Khurana School’s trustees, they are answerable for the drug incident. He will say that calling the police is necessary. A kid will tell Ruhi that her mother turned out very bad as she drugged school students. Ruhi will say that her mother can’t do this. The kid will shock Ruhi by telling her that police came to arrest her mother. Principal will call the police. He will tell the inspector that they found drugs in the chocolate that Prisha gives to school students, which Prisha accepted herself. Police will be seen arresting Prisha. Dev will smirk seeing all this, while Rudra and Saaransh will get worried for Prisha.

Reviewed Rating for Yeh Hai Chahatein 5th April 2022 Written Update Prisha stunned: 4/5 This rating is solely based on the opinion of the writer. You may post your own take on the show in the comment section below.