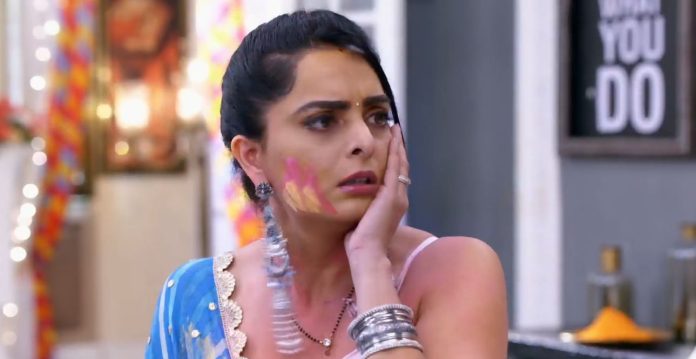 Kundali Bhagya 8th April 2022 Written Update Sherlyn slapped Sherlyn hears Shrishti telling Preeta about Karan’s kiss. She hides outside the door until Shrishti leaves. Preeta gets shy thinking about Karan’s kiss. She really loves Karan and thinks Karan also loves her a lot. While Preeta is intoxicated, Shrishti leaves her in the room and goes to bring Biji and Janki. Sherlyn enters the room and finds Preeta dancing. She stops Preeta and tells that she has a good news to share. She reveals that Karan and Natasha will be doing something tonight which Karan and Preeta never do. She angers Preeta by mentioning about the wedding night.

Preeta loses her cool at the mere mention and slaps Sherlyn hard. Sherlyn is much upset after getting the unexpected slap. Preeta tells that Karan has kissed her and everyone has seen it. She fees happy that Karan still loves her. Sherlyn tells that Preeta will lose Karan after this night. She knows that Preeta knows the truth now but can’t do anything about it. She doesn’t think Preeta will fail her plan.

Preeta slaps her in anger. Sherlyn is shocked thinking Preeta is in her senses. Preeta calls her a liar. She tells that Natasha can never become her Sautan. She doesn’t think Karan can get any lover, he just looks good with her, he is just of Preeta. Sherlyn tells that they shall see the truth tonight. She locks Preeta and goes away. She tells that Karan and Natasha will unite, Karan will marry Natasha and leave Preeta forever. The elders are also drunk. They sing and dance. Shrishti thinks to stop their madness. She sees Naagre and Pradeep going. She tries to catch them. The family attacks them too.

Natasha tells Sameer that Shrishti is calling him. Naagre and Pradeep flee from there. Shrishti looks for them. Sherlyn and Natasha ask Karan to come with them, they will take him to Preeta. Mahesh gets into light moments with his family. Karan tells that he wants to play holi. He praises Preeta’s beauty, that she is so white that he fell in love at first sight. Natasha tells that she can’t do anything with Karan. Karan falls down. Pradeep and Naagre come across him. Naagre asks Karan for an autograph. Sherlyn asks Natasha to take Karan to his room. Natasha asks Karan to come with him.

Naagre and Pradeep get into a funny fight. Karan goes away to his room, while Sherlyn and Natasha are busy in handling Naagre and Pradeep. Karan calls Preeta out. He plays a song and dances. Preeta hears the music. She knocks the door and shouts for help. Karan asks who is there. She asks him to come at the window and help her. Karan reaches Preeta and asks how did she get locked. She tells that Sherlyn has locked her. She asks her hero to free her by opening the door. Karan sits outside the door and tells that he is really tired.

Naagre and Pradeep irritate Sherlyn by their nonsense talks. Naagre cries for Prithvi who is in jail. Sherlyn asks them to shut up. She tells that if anyone sees them, then they will land up in jail. Natasha doesn’t know why Prithvi has sent these fools to him. Natasha looks for Karan. Sherlyn asks her to find out Karan. Naagre asks Sherlyn not to fight with Preeta, else she will lose. He praises Preeta. Sherlyn slaps him in anger. Naagre falls down. Pradeep cries that Naagre died. She tells that he didn’t die, he is just unconscious.

Pradeep kicks Naagre and makes him regain conscious. Shrishti finds Janki and Biji drunk. She gets into a tough time handling them. Karan unlocks the door. Preeta cries. He asks why is she crying. She tells that Sherlyn had locked her. He calls Sherlyn mad. She is scared that Sherlyn will lock her again. He tells that Sherlyn can’t lock her, he will shut the door to stop Sherlyn. Karan and Preeta lie on the bed and laugh. They get into a moment when the fate brings them close.

Reviewed Rating for Kundali Bhagya 8th April 2022 Written Update Sherlyn slapped: 4/5 This rating is solely based on the opinion of the writer. You may post your own take on the show in the comment section below.