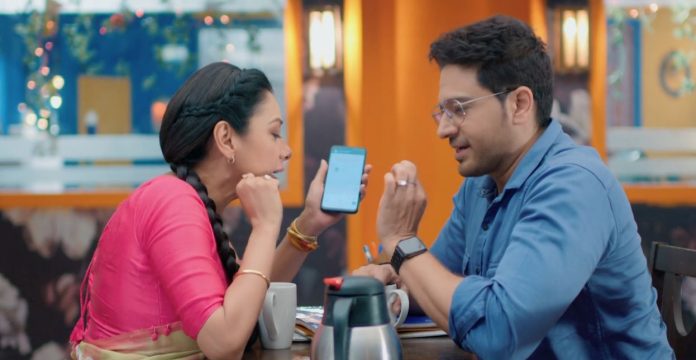 Anupama says her first marriage ceremonies were very upsetting. She says her neighboring Ketki aunt chose her chunri, Ketki aunt’s daughter-in-law applied the wedding mehndi to her, she took wedding vows wearing Baa’s old saree and even her sangeet function went very upsetting and she kept crying. Anupama says that like today’s girls choose everything for the wedding on their own, she didn’t even have the knowledge about it in the past. She reveals that she didn’t even know when the wedding happened in the evening as she kept cooking since morning for the relatives.

Anupama also reveals that when she entered the Shah house after marriage, Baa started performing aarti. She further reveals that between aarti, Baa’s head started aching and she (Anupama) went to the kitchen to make tea. Anupama says she kept standing in the kitchen only since then. Everyone feels bad for Anupama, hearing all this. Anupama stutters and says that now she is doing love marriage and thus she will surely take her right of happiness. Anuj says sure. Anupama says she will herself choose her wedding lehenga, mehendi design and chunri. Everyone teases Anupama saying, awe.

Malvika in fun calls Anupama as “bridezilla”. GK calls Anuj as “groom jhalla”. Samar says they will get tired tolerating the bride and groom’s tantrums. Anupama asks Samar if he can’t do this much for his mother. Malvika tells Anuj and Anupama that they will surely take all their tantrums as they are very cute. Everyone starts planning Anuj and Anupama’s wedding. Anuj and Anupama secretly get romantic with each other. Anuj and Anupama tell everyone that they decided to do the wedding grandly without any wastage and at less expense. At the same time, Bapuji receives a message and gets upset. Anupama notices this and sees Bapuji going outside.

Samar says that he and Kinjal will handle mandap setup and decoration. Malvika says she and Devika will handle the bride and groom’s outfits. GK says he will handle photography and videography. Mamaji jokingly says he will do Naagin dance. Samar tells Mamaji that they are distributing wedding work, not deciding choreography. Mamaji says he remembers everything. Outside on call, Bapuji puts the phone on speaker and asks Baa what happened. Baa tells Bapuji that Anupama went mad in love and he went mad in Anupama’s marriage preparations. She says Vanraj is getting mad in anger. Bapuji tells Baa that all this is Vanraj’s fault only.

Baa says she accepts that Vanraj is at fault and asks Bapuji what they should do. She asks Bapuji if they should slap Vanraj, teach him a lesson, or leave him in the condition he is in. Bapuji asks Baa to do whatever pleases her. Baa tells Bapuji that Vanraj has broken with repeated defeats after putting all his efforts in work. She says that she fears that Vanraj might take a wrong step with his life. Bapuji tells Baa that Vanraj would have casually said that as their son isn’t that weak. Baa says Vanraj is broken and sad. She tells Bapuji that a sad and broken person can do anything, especially when his self respect gets hurt.

Bapuji disconnects the call asking Baa to not worry as he will make Vanraj understand after returning. Anupama overhears everything. She says Vanraj was never like this. Bapuji tells Anupama that Vanraj may have said all this in anger. Anupama tells Bapuji that she saw Vanraj sitting silent in the cafe with his head down. She says she can’t talk in between as it’s not her right. Bapuji says after everything Vanraj is his son and he would obviously feel tense hearing such words from his son. Anupama tells Bapuji that he doesn’t need to clarify himself to her as she understands that hate can bring change in relations but can’t break them. Bapuji asks Anupama to stay away from all this as he doesn’t want her marriage to get affected due to all this.

Bapuji says Baa was right that a man can even lose his life, if his self respect gets hurt. Worried, Anupama says that she will talk to Dolly and asks Bapuji to stay with Vanraj. Anuj overhears Anupama and Bapuji’s conversation. At Shah house, Baa enters Vanraj’s room and asks him if he is fine. Vanraj lies in Baa’s lap and tells her that nothing is fine, not even him. Baa gets worried. On the other hand, GK and Bapuji are seen asking Pandit Ji to take out a muhurat for Anuj and Anupama’s wedding. Pandit Ji again and again tries telling Bapuji and GK something about Anuj and Anupama’s kundli and gun, but Bapuji and GK ignore it in their fun. They ask Pandit Ji to just out muhurat. Pandit leaves saying okay.

GK and Bapuji indulge in a cute in-laws fight/argument. Kinjal and Samar come and ask them the reason behind their fight. Bapuji and Gk ask Kinjal and Samar to explain that the goon act of being bride and groom’s relative won’t work. Samar and Kinjal explain to GK and Bapuji that there is no difference between groom and bride’s relatives. Bapuji and Gk give each other a hug and high five. Samar and Kinjal get shocked seeing GK and Bapuji laughing by fooling them. In the kitchen, Malvika asks Anupama to care about Anuj’s emotions, forgetting Vanraj. She asks Anupama why she asked Anuj to talk to her about giving Vanraj, another chance.

Shocked, Anupama tells Malvika that she doesn’t even have any clue about and didn’t say anything to Anuj. Malvika tells Anupama that she can’t accept this from her to-be sister in law to hurt her brother for evil Vanraj. She also tells Anupama that Vanraj, Kavya and Baa don’t deserve her goodness. Anupama asks Malvika to stop. She tells Malvika that she didn’t talk about Vanraj to Anuj and anyone. Malvika asks why Anuj came to her to talk about giving Vanraj another chance. Anuj comes there and says he will answer this. He says he heard Anupama and Bapuji’s conversation. Anuj apologizes to Anupama for this. Both Malvik and Anupama ask Anuj why he is siding with Vanraj after whatever Vanraj and his gang did to him.

Malvika says she will never forgive Vanraj for separating them. Anupama says Vanraj is himself responsible for his present condition. Malvika tells Anuj that considering Vanraj’s crimes, she will never forgive Vanraj and will never let him (Anuj) forgive Vanraj. Anupama says after already giving two chances to Vanraj, she won’t ever ask anyone to give another chance to Vanraj. Anuj says he doesn’t want Shah house’s problems to increase to the level that it starts affecting his and Anupama’s marriage. At Shah house, Baa tries consoling broken Vanraj. Vanraj refuses to let Baa talk to Malvika or anyone for him. On the other hand, Anuj tells Anupama that he gets selfish when it comes to her.

He says he doesn’t want any other thing in the world but just “his Anupama”. Anupama and Malvika get emotional with Anuj’s unconditional love for Anupama. He tells Malvika that he just requested her, not forced her. Anuj tells Malvika that it’s her business and post and thus the decision should be hers only. He leaves after saying a poem/shayari, making Anupama and Malvika emotional.

Reviewed Rating for Anupama 9th April 2022 Written Update Fresh start: 4/5 This rating is solely based on the opinion of the writer. You may post your own take on the show in the comment section below.