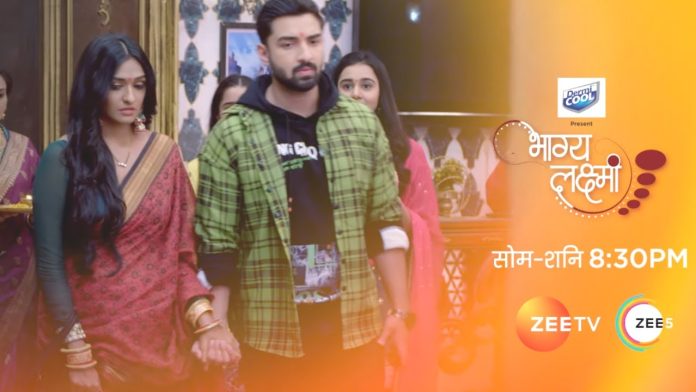 Bhagya Lakshmi 12th April 2022 Written Update Lakshmi returns Neelam tells that Lakshmi will be coming to stay with Rishi. Dadi tells that Lakshmi shouldn’t come and get insulted. She doesn’t want to see Lakshmi’s insult. Karishma tells that its court orders and they have to follow it. She asks them why did they suggest the divorce idea when its not working well. Malishka tells that it was her idea, she wanted to free Rishi from the loveless relation. Dadi tells that Rishi got tied up in the loveless relation. She rebukes Malishka. She tells that Malishka will be responsible for the entire mess. She tells that the judge would have not decided this if the divorce wasn’t applied.

Malishka tells that she wanted this divorce to happen. Dadi asks Neelam to not listen to Malishka. She tells that she is the eldest in the family, she has a right on them. She gets stressed. Neelam tells that Lakshmi will be coming in the morning. Rishi tells Ayush that divorce was a game, Lakshmi wants to come in the house and own the Oberoi industries. She tells him that the time will pass soon, after three months, he will ask Lakshmi to not show her face, she cheated him, he loved her so much and trusted her, but even then she backstabbed his trust. He feels regretful. Ayush consoles Rishi. Rishi tells that their sorrow will end, he will get happy by making Lakshmi sad. Ayush also feels Lakshmi did wrong with Rishi.

He also starts hating her. He tells that she has done it, so even he doesn’t want to support her. He wants to support Rishi. He tells that he won’t talk to Lakshmi when she comes home. Lakshmi gets hurt while packing her bags. She recalls Rishi. She gets a smile on her face. Virender finds Dadi angry. Neelam tells that Malishka and Lakshmi are the reason for the mess. Kiran defends Malishka. Neelam tells that its Malishka’s mistake as well, they are stuck now and have to tolerate Lakshmi for three months. She feels helpless. Virender hugs her. He tells that they can’t do anything now. He is also heartbroken that Lakshmi filed for divorce. He tells that the Lakshmi who is coming home isn’t his daughter.

Lakshmi asks her sisters not to fight after she goes. Shalu and Bani tell that they won’t fight. They ask Lakshmi to stay with Rishi happily and with love. Lakshmi tells that she doesn’t want to take any pickles, but sweets, when she goes and makes sweet relations with Rishi. She remembers that he was much upset with her. Shalu reminds that Rishi cared for her in the court when he was angry on her. Lakshmi tells that she is really feeling bad that Virender is also upset with her.

Virender tells that Lakshmi isn’t the same like before, this Lakshmi is someone else, the Lakshmi he knows always joins relations, he was sure that she can never think of divorce and break relations. He feels angry on himself that he made a mistake in knowing Lakshmi. Lakshmi tells that she isn’t able to tell the true intentions to anyone. Shalu asks her to tell her well wishers that she is still the same, she did this for a motive to be with Rishi. Virender tells that Lakshmi isn’t like before. Malishka asks Rishi why did he care for Lakshmi and run to do the aid to her. She tells that his gesture of care has turned the result of the divorce case.

Rishi asks her not to misunderstand him. Kiran asks why did he care for Lakshmi when he should have said that he hates her. Rishi tells that he doesn’t hate her. Malishka asks him if he loves her. He tells that he hates Lakshmi now, he had cared for Lakshmi, he accepts his mistake. She rebukes him for his big mistake that ruined everything. She tells that she is blamed, she is tolerating everything because he couldn’t control his emotions. She asks them to welcome Lakshmi home tomorrow.

Lakshmi packs her bags. Rano asks Lakshmi if she is sure of the divorce. She wants to know if Lakshmi will get her alimony. Pritam stops Rano. He asks Lakshmi to take rest, she has to leave in the morning. Rishi remembers the judge’s decision. He doesn’t know what happened to him. He tells that Lakshmi thinks she has won, but he won’t let her win. Lakshmi feels happy that she got hurt, because of which she got to see Rishi’s true affection. Shalu tells that Rishi really cares for Lakshmi. She loves Rishi and Lakshmi’s unique love story. Lakshmi tells that she will go to Oberoi house alone.

Shalu tells that Lakshmi has the legal rights this time, she has the power in her hands and no one can oust her. Lakshmi tells that she is going for Rishi’s sake to fight his Markesh dosh. She adds that she will not let anything happen to Rishi. Rishi plans to do something that troubles Lakshmi and makes her leave on her own. He stays too upset because of her divorce decision. Shalu asks Lakshmi to message Rishi to meet her at home. Lakshmi messages Rishi. He takes her words wrongly. He thinks she is challenging him. He replies that he doesn’t want to meet her. Lakshmi reads his message.

Shalu asks her not to lose heart. Next day, Lakshmi arrives home alongwith her sisters. Neelam asks Lakshmi if she has taken the court orders seriously. Malishka asks her to go back and not stay with anyone she hates. Shalu asks Malishka not to give a wrong advice to anyone. Karishma argues with Shalu. Shalu tells that she has come to drop Lakshmi, it’s the court order that Lakshmi will stay in the Oberoi house. Neelam tells that she already knows this. She asks Lakshmi to stay with them, but not come in her sight. Shalu stops Lakshmi at the door. She asks Neelam to welcome Lakshmi. She stops Neelam and Rishi from going. She asks them to get the aarti plate and welcome Lakshmi.

Reviewed Rating for Bhagya Lakshmi 12th April 2022 Written Update Lakshmi returns: 4/5 This rating is solely based on the opinion of the writer. You may post your own take on the show in the comment section below.