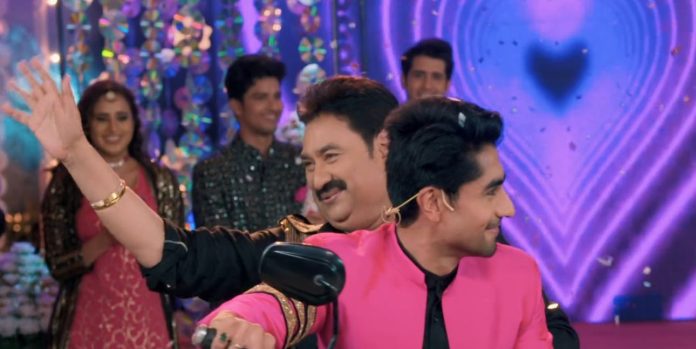 Yeh Rishta 13th April 2022 Written Update Sangeet twist Aarohi applies balm on her forehead. Akshara sees this and tells Aarohi that her headache will go away after she tells her something. Aarohi feels irritated. Unaware of the truth, Akshara tells Aarohi that Abhimanyu forgave them. Shocked Aarohi says she can’t believe this. Akshara says even she didn’t believe it initially. She tells Aarohi that she believed it when Abhimanyu told her that Manjiri made him understand. Aarohi hugs Akshara tightly saying thank god. Akshara requests Aarohi to be careful next time.

She explains to Aarohi that they can’t always take everything so lightly. Akshara tells Aarohi that she won’t ever be able to forgive her if she commits any mistake in future. Before Aarohi can say anything, Akshara stops her and asks her to end the matter here. She leaves saying that she doesn’t want to spoil the mood as it’s sangeet ceremony tomorrow. Aarohi feels confused. Next morning, the full Goenka family and half Birla family talk to each other on video call. Other members of the Birla family don’t sit or stand in video call frame. Manish asks how they will decide songs and themes, this way. Harsh says Goenkas are a real dancer’s family.

Akhilesh asks about Harsh’s whereabouts. Manjiri apologizes and tells Goenkas that Harsh went busy with work for an urgent meeting. Manish says Harsh should at least spare one day for his son’s wedding. Parth asks Goenkas to come to their home in the evening and then they will together decide the theme. Vansh says they can’t leave everything at the last minute, but should decide something in advance. Neil says Groom’s family versus Bride’s family is decided in advance. Everyone agrees to this.

Manjiri notices Harsh’s irritation. She goes to Harsh and asks him why he seems angry since yesterday. Harsh ignores Manjiri’s questions. Manjiri requests Harsh to return home early in the evening for the Sangeet Ceremony. She asks Harsh to give some ideas for the Sangeet ceremony theme. Harsh rudely says his idea is not needed as everyone has loads of ideas. In his anger and irritation, Harsh indirectly reveals that he is angry because Abhimanyu opened a new department for Akshara and Manjiri sang for her. He asks Manjiri to think of a new song in Akshara’s love. Manjiri tells Harsh that he is misunderstanding everything. Harsh tells Manjiri that he has understood that she and Abhimanyu want to show that he has no value/importance in Birla house and hospital. Abhimanyu is seen going upstairs to check Manjiri’s BP.

He says that first, Abhimanyu chose Akshara as Birlas daughter-in-law against his will and then got a new department opened in the Birla hospital for Akshara without informing him. Manjiri says Neil told her that Abhimanyu didn’t spend much on the music therapy department. Harsh says he isn’t talking about expenditure. He says he runs Administration of Birla hospital and a new departement got opened without his knowledge. Harsh accuses Manjiri and Abhimanyu of playing games with him, pretending to be nice.

He asks Manjiri to not forget whatever her and Abhimanyu’s status is today, is only because of him. He tells Manjiri that she even has Abhimanyu because of him only. Before Abhimanyu could reach Manjiri, Nishtha stops him to show him the dance step he will be doing with everyone. Manjiri apologizes to Harsh for making him feel bad. She requests Harsh to not be angry as kids are very excited for the sangeet ceremony. Harsh tells Manjiri that he can’t guarantee about attending the sangeet ceremony as he has organized a function for the minister arriving from udaipur. He says the 5 years contract will get canceled if he won’t attend the minister’s function.

Harsh asks Manjiri to attend her nonsense sangeet as someone will have to work to run the house and hospital. He also asks Manjiri to have fun as he will have to work. Abhimanyu screams from behind, asking Harsh to lower down his voice. He tells Harsh if wants someone else to not interfere in his and his wife’s matter, then he should keep his voice down. Harsh tells Manjiri that she forgot to teach manners to Abhimanyu. He asks Manjiri to remind Abhimanyu to talk properly to his father, otherwise he will make him understand that a son can never surpass a father. Abhimanyu tells Harsh that he can’t ever change. Harsh tells Abhimanyu that he doesn’t need to change himself as new people and new hobbies have come to his life, not his (Harsh).

Abhimanyu decides to wait till evening. He says if he can’t tolerate anyone talking rudely to his mother, how can he tolerate that someone almost killed her and left her to die. Abhimanyu says he won’t spare Manjiri’s culprit, once he/she gets caught. Manish and Swarna talk funny about Birlas. Manish tells Akshara that they will surely defeat Birlas this evening. Goenkas starts practicing dancing with Reem. Vansh says Abhimanyu is calling Akshara. Everyone stops Akshara as she runs to pick up Abhimanyu’s call. Akshara says she promises that she won’t tell anything to Abhimanyu. Kairav doesn’t allow Akshara. Vansh tells Akshara that they don’t want Goenkas to lose because of her love for Abhimanyu. Goenkas again discusses how to defeat Birlas.

At Birla house, Birlas are seen practicing with the choreographer. Nishtha requests Shefali to leave her phone and focus on the practice for some time. Shefali asks Nishtha to wait as she is doing something important and can focus on only 1 thing at a time. Parth overhears this and says he wonders how Akshara balances two things at the same time. He asks Nishtha to let her be and practice her own steps. Abhimanyu thinks that he has to tell Akshara that today evening Manjiri’s culprit will be revealed. He feels upset as Akshara isn’t receiving his calls since morning. Neil receives Reem’s call. Reem asks Neil if Birlas need any help in decorations or arrangements. Neil tells Reem they don’t need any help as they are sorted.

Abhimanyu tries to see Akshara in Reem and Neil’s video call. Neil and Reem understand it. They make an excuse of decorations to let Abhimanyu freely see Akshara. Abhimanyu feels happy seeing Akshara happily dancing with her family, without any tension. Akshara notices this and takes the phone aside. Both Abhimanyu and Akshara tell each other how much they are missing each other. Abhimanyu asks Akshara if she has got tired, should he bring coconut water for her. Akshara asks Abhimanyu to not come as otherwise her competitive family will doubt him to be a spy. Abhimanyu asks Akshara to not worry about him.

Akshara tells Abhimanyu that worry is the other name of love. Abhimanyu tells Akshara that she has started talking a lot. Akshara tells Abhimanyu that it’s the effect of his company. Both Abhimanyu and Akshara indulge in a cute and competitive talk. Before Abhimanyu could tell Akshara about the private investigator’s message, Shefali and Kairav snatches their phones. Kairav disconnects the call saying that tonight is a musical war between great Goenkas and busy Birlas. Abhimanyu says only good will happen today evening and bad will happen to whoever did wrong. At Goenka house, unaware of the truth, Akshara feels thankful to Manjiri for making Abhimanyu understand. She swears that nothing wrong will be done from her side.

Akshara feels thankful towards Abhimanyu too for forgiving her and Aarohi. Aarohi notices this. She finds it difficult to understand that Abhimanyu forgave her and didn’t make any issue for hurting Manjiri. Akshara decides to focus on her sangeet. On the other hand, Mahima types a note for Abhimanyu’s private investigator telling him that Manjiri’s accident happened from Akshara and Aarohi’s car. She also types who was driving the car but it doesn’t get revealed at present. Mahima evilly smirks thinking that now the private investigator will make this letter reach Abhimanyu. At Goenka’s house, everyone asks why Akshara is screaming so much. Vansh reveals that Akshara’s favorite singer Kumar Sanu is arriving in Udaipur for her favorite function.

Reviewed Rating for Yeh Rishta 13th April 2022 Written Update Sangeet twist: 4/5 This rating is solely based on the opinion of the writer. You may post your own take on the show in the comment section below.