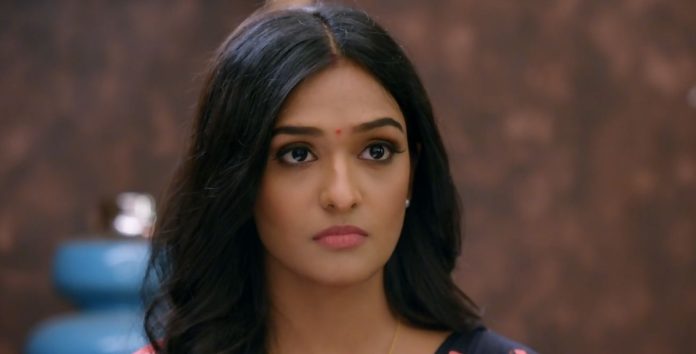 Bhagya Lakshmi 15th April 2022 Written Update Lakshmi swears Lakshmi knocks the door and asks can she come inside the room to find Virender’s glasses. Neelam permits her to come inside, but Virender stops her. He tells that he will do his work himself, he doesn’t want any help from Lakshmi. Lakshmi tells that her relation with Virender is the most important. She wants to mend her relation with Virender first. Lakshmi and Rishi get into a moment, while Malishka watches them angrily. Malishka shifts to Rishi’s house to keep an eye on him. She is much upset that Rishi isn’t staying on his word, and melting his heart for Lakshmi.

Lakshmi tells that she will get everything that she lost. Lakshmi and Rishi come closer. She wants to be with him and take care of him. Her goal is to protect Rishi from the deadly Markesh dosh. She knows that the next two days are the most critical for Rishi. How will Lakshmi keep her promise and protect Rishi? What will Malishka do because her insecurities? Keep reading.

Lakshmi wakes up to have water. Neelam tells that she is tensed that Malishka’s words can get true. Lakshmi takes care of Rishi, and hugs him. Neelam is shocked to see them close and informs Malishka about it. Malishka packs her bags to go and stay with Rishi. Virender asks Neelam what was she doing. Neelam tells that she wasn’t looking at anything. She goes away. Virender and Dadi know that Neelam was looking inside Rishi’s room. Dadi tells that its Neelam’s fear. Kiran asks Malishka to control her fear, it can break her weak relation with Rishi and ruin everything.

Dadi tells that a woman can make any weak ties strong. Virender asks why is Neelam scared. Dadi tells that Malishka is scared, even Lakshmi is scared, they both will try to end their fears and make their relation with Rishi strong. He tells that he has understood it. He tells that he will go to office. She also looks inside Rishi and Lakshmi’s room. She finds Lakshmi close to Rishi. Lakshmi is worried for Rishi’s life. She wants to protect him. She wants to tell him that she has signed the divorce papers, she has decided it just to be with him. She promises to always protect him. She wants to make him her world and become his world. She pledges to never let their relation break. Dadi gets caught by Lakshmi.

Lakshmi takes her blessings. Dadi tells that she has come to see something. Lakshmi tells her about the boxing bag, Rishi has named it Sumo. Dadi tells that she has not come to see Rishi and her, she has come to find Virender’s glasses. Lakshmi offers her help. Rishi wakes up. She asks him to sleep, she will go and find Virender’s glasses. Rishi taunts her for doing everything secretly. Dadi don’t want them to fight. Rishi asks Dadi not to worry, she isn’t fighting because of her. Lakshmi goes with Dadi to find the glasses. Malishka thinks she has seen Rishi near the icecream stall.

She checks and finds another guy. She tells the story of Rishi and his wife Lakshmi. She gets into an argument with the couple. Rishi throws the pink brush. He tells that Lakshmi is showing her rights on his bedroom and washroom as well. He gets angered. He doesn’t want to believe her. Dadi thinks to go and tell Virender that Lakshmi is coming to find his glasses. Lakshmi asks Neelam if she can come in and find Virender’s glasses.

Dadi tells Neelam that she had gone to Rishi’s room to check, Rishi and Lakshmi were sleeping together. Neelam tells that its wrong. Lakshmi finds Virender wearing his glasses. She asks him to say sorry to Dadi, she was finding his glasses. He tells that he will do his work himself, he doesn’t need Lakshmi’s help. He gets angry on Lakshmi. Lakshmi weeps that she has lost the family. She wants the entire family back. She misses their love. She tells that she got many relations because of Rishi, she will regain everything she lost. She encourages herself.

Ayush meets Rishi. He advises him not to be kiddish. Rishi asks him not to support Lakshmi. Ayush tells that he is with Rishi. Lakshmi comes back to her room. Ayush doesn’t talk to her and goes. Rishi makes a plan. He smiles seeing Lakshmi going to the washroom. She finds her brush fallen down. She gets scared seeing a lizard. She realizes it’s a fake one. She tells that she isn’t scared of anything so silly. Rishi waits for her scream. She takes a bath and comes back. Rishi goes to check the washroom. He recalls his plans. Ayush asks Rishi why did he call him. He screams seeing the lizard.

Rishi tells that it’s a fake lizard, he has got it to scare Lakshmi. He had closed the hot water tap just to anger Lakshmi. He thinks his plan will be successful. He asks her did she really take a bath. Lakshmi tells that she had a cool water bath. She asks him to go and have a talk. He goes to the washroom. She smiles and talks to Sumo. Rishi finds the shower tap working fine. He thinks she is really smart to fix the tap. The water supply gets cut. Rishi calls Lakshmi for help. Lakshmi gets the water. She asks him to open the door. He asks for water. She helps him. he asks her why did she get water. She tells that he was shouting. He doubts that she was ready with the water, it was her plan to trouble him.

Reviewed Rating for Bhagya Lakshmi 15th April 2022 Written Update Lakshmi swears: 4/5 This rating is solely based on the opinion of the writer. You may post your own take on the show in the comment section below.