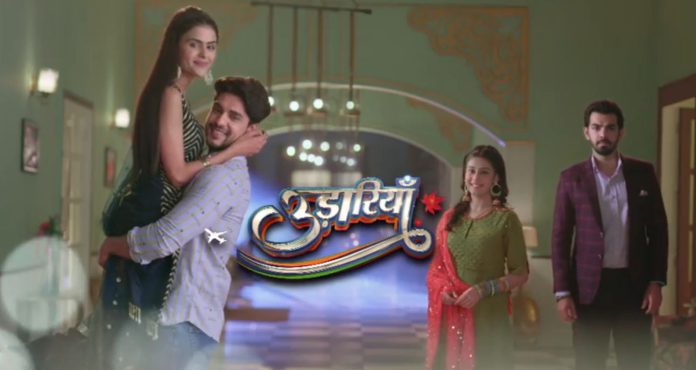 Udaariyaan Fatejo London track 22nd April 2022 Spoilers Udaariyaan episode spoiler – Tejo in London Fateh roams aimlessly in London and remembers Tejo’s words. He goes into the flashback and recalls that she had told him she will wait like a princess in her palace for him and had asked Fateh to come on a white horse. Fateh sees Tejo roaming and laughing along with her friends in London. Tejo has completely changed her dressing sense but her face is the same. She doesn’t recognize Fateh while he looks at her.

Prisha tells someone on the call that Armaan has come on his knees to hug her. Armaan tells Simmi that if a tiger has taken back his steps doesn’t mean that he has left hunting but it means that he is going to jump much higher on his prey. Soumya interrupts Armaan and asks him what is he talking about tiger and hunting. Armaan gets frightened.

Bhoomi asks Kaju if she will be working at their house from today. Kaju replies yes. Bhoomi gives her a plate and tells her to deliver it upstairs. Pari’s father and uncle warn Kaju that the person she is taking the food for is not mentally stable and gets attacks in short intervals. Kaju takes the food but Neel jumps on her thinking that she is Pari. Kaju gets startled but Neel doesn’t let the plate fall.Woh To Hai Albelaa episode spoiler – Krishna’s stress eating:

Krishna, Chiranjeev, and Nakul dance together in excitement. Chiranjeev and Nakul pick up Sayuri on their shoulders and rotate her around. Sayuri tells Krishna that she will take care of Chiranjeev and all the people related to him with love. She tells him clearly that she will not do this because of Krishna’s fear but because of her own will. Anjali asks Krishna what has happened and why is he stress eating so much. He discloses that he changed the horoscopes to match them perfectly.

Diya and Armaan are all set to get married. Krish tells Sudha that her wish has finally been fulfilled but she is still not smiling. He requests her to smile or else the photographs will come out bad. The priest asks Diya and Armaan to stand up for pheras. Diya is not able to stand up due to the injury. Brij Mohan asks Diya if she will be able to walk and she says that she can’t walk as she is not even able to stand. The priest says that pheras should be only taken by the bride or else the marriage will be incomplete.