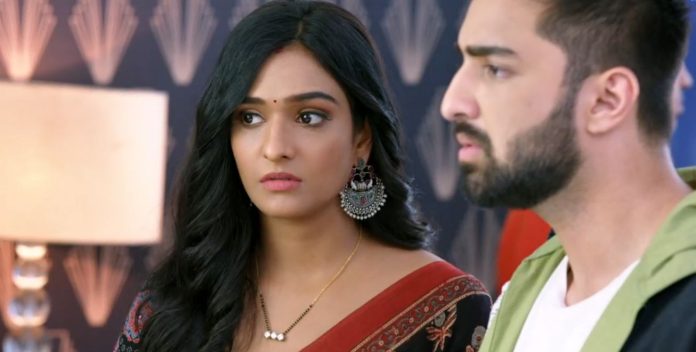 Bhagya Lakshmi 27th April 2022 Written Update Love saga Lakshmi likes the resort. Rishi asks her not to get so excited and react immaturely like kids, after all she is with Rishi Oberoi, the owner of Oberoi Sheraton. He asks her to control her excitement even if she likes something. She tells that she has to live every little joy, she has to feel excited and happy. She asks him to look at the flowers and realize the feeling of happiness. He calls it a kiddish thing. She tells that he is too boring. She goes away. He thinks to try out her suggestion. He looks at the flowers and thinks to feel that he never saw those flowers before. He smiles.

Lakshmi comes back and tells that he got a smile on his face. He asks did she come to see him or the resort. He tells that he gets affected by her words, so she shouldn’t talk such things. She smiles happily. He asks her not to smile. Manager welcomes them. She takes the soft drink and likes it. Rishi wants her to tone down her excited reactions. Manager sends them to the room. Malishka gets down the cab. The driver flees with her bag. He thinks he has got much costly things. She shouts that her good fate is Rishi, nobody can snatch him. She wants the end to be in her favor.

Rishi feels awkward seeing the lovely decorations in the hotel room. He tells Lakshmi that he didn’t make any such booking. The man tells that it’s a complimentary service for the newly weds. He tells that it’s the best honeymoon suite, the setting and view, its really romantic and increases the love between the couple. Rishi tells that he wanted a presidential suite. He tells the staff that he liked the honeymoon suite but doesn’t want it. He summons the manager and reminds that he can buy the resort if he likes it.

Manager tells that he has made arrangements for him knowing he is coming with his wife. Rishi asks him to give the presidential suite to him. Manager apologizes and tells that an elderly client is staying there. Lakshmi asks manager not to disturb the elderly person. Rishi and Lakshmi agree to take the honeymoon suite. Manager tells that they can stay in the honeymoon suite when they are husband and wife. Malishka hears this and cries.

She thinks Rishi can never do this. She is sure that Lakshmi is wrong. Kiran tells that Rishi is falling for Lakshmi, Malishka will soon lose him if she leaves them alone. Malishka tells that she has come after Rishi to keep an eye on him. Kiran asks her to book a room in the same resort. She tells that she will soon arrange the clothes for her. Malishka loves Kiran. She goes to the resort. She swears to trouble Lakshmi and make her run away. Rishi and Lakshmi start fighting for the luggage space in the cupboard like kids. He asks Lakshmi how did she become so bold, if she will sleep on the same bed with him. Lakshmi agrees and asks him why is he asking. He asks her to spare the cupboard and bed.

She tells that she isn’t interested in sleeping with him on the same bed, he dances on the bed all night. He asks who dances during sleep. She tells that he keeps moving on the bed, he occupies the entire bed. They both argue. They fall over on the bed and have an eyelock. Malishka books a room in the resort. She asks manager not to tell Rishi about her stay. She asks if the balconies are connected for all the honeymoon suites. She is glad to get a chance to keep an eye on Rishi and Lakshmi. She trusts Rishi. She knows that he can’t feel love for anyone else than her. Rishi starts feeling love for Lakshmi.

He asks her to get up. Lakshmi asks him to get up first. He tells her that he won’t share the room with him, he will find another room for himself. She tells that she will not leave him alone, she will stay with him. She tries hard to convince him. She tells him that her dad had taught her to change the tractor tyre and drive it also. Rishi doesn’t believe it. He tells that he is more smart than her. He asks if she will stay in the same room.

They argue further. She wants to stay with him. He tells her that he is more stubborn than her. She asks him to give a reason to shift from the room. He tells that she is the biggest reason, he will work all night, he doesn’t want to disturb her sleep, so he will shift to another room. She asks him to shift if he wants, but at night. He asks her if she has fallen in love with him. She gets stunned by his question. He asks her why is she not letting him go away from her sight for a second like she loves him.

Reviewed Rating for Bhagya Lakshmi 27th April 2022 Written Update Love saga: 3/5 This rating is solely based on the opinion of the writer. You may post your own take on the show in the comment section below.