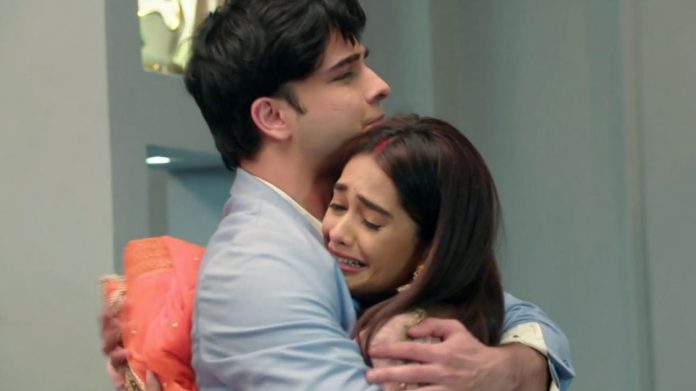 Kumkum Bhagya 3rd May 2022 Written Update Pranbir future Prachi fears that she had seen a future with Ranbir for the sake of her coming baby, and it doesn’t seem to happen. Ranbir gives two options to Rhea. He tells her that if she sleeps in his room, then he will leave the room and go to Prachi’s room to sleep. He tells the second option that if she wants to stay in the same room, then she has to sleep on the couch. He asks her to stay away from him. Rhea gets speechless. She tells him that she will decide. He asks her to say yes or not. Rhea gets angered that Prachi always becomes an enemy of her happiness, she always comes between Ranbir and her. Rhea asks Aaliya to just kill Prachi, because she can’t take it anymore.

Prachi wanted Ranbir to come back in her life so that their baby gets a father’s love, that the baby gets a normal happy family. Prachi didn’t imagine that Ranbir will get silent and not support her in front of his family, when Rhea has called her an outsider and forcing relation on Ranbir. She wishes Ranbir to take a stand for their future. Shahana advises her to tell Ranbir about the baby and make it a winning streak. She tells that all the doubts will get cleared when Ranbir learns the good news. Prachi is still not sure whether he deserves to know the good news or not. Poor Ranbir got shot in order to save her, and still doesn’t win her faith completely. Keep reading.

Earlier in the show, Rhea threatens Prachi. She tells that she wants Prachi to leave the house. Prachi tells that she will throw out Rhea from the house. Pallavi reaches there and finds them arguing for Ranbir. Rhea asks Pallavi to explain Prachi, not fight her. She shows her concern for Pallavi’s health. Pallavi walks to Prachi and asks her not to do such crazy things again. She gives her a last warning. Prachi tells that everything repeats in the house always. Pallavi asks her to behave herself. Prachi tells that her behavior was always good, but now she had to learn something from Kohlis. Pallavi asks Prachi is she questioning her behavior. She leaves Prachi with a warning. Rhea goes to Ranbir. She finds him sleeping. She feels she has won now, she has tolerated a lot to get Ranbir and finally her patience has paid off. She is glad that her time and fate have changed, they will have a family soon. She gets dreaming of Ranbir.

Rhea tells Aaliya that she loves her a lot. She hugs her happily. She praises Aaliya for planning her happiness and safety. She is glad that Aaliya is with her. She tells that she felt everything is over, Ranbir will get away from her, Nick will expose her truth and then she will lose it all. Aaliya asks her not to get afraid and cry. She stops Rhea from becoming emotional. Rhea tells that she is emotional that she is going to get her happiness back, she was failing every time. She recalls the past. She tells that she has failed in every plan, she couldn’t harm Prachi or prove her characterless, she couldn’t succeed in the murder plan as well, but finally she is winning, she is going mad seeing Ranbir in her room.

Aaliya is happy to see her smiling face. On the other hand, Prachi still vents her frustration in front of Shahana. She blames herself for dreaming big and having expectations from Ranbir, who never supports her. She tells that she had gone to stay with Ranbir in his room, but he showed her the right place, now she isn’t blinded by love, she got to see the truth, Ranbir has cheated her once again, he doesn’t love her, he has always misled her by huge boasting talks of love, she will not trust him now, he has to earn the trust, he has to prove himself innocent, how long will be stay with Rhea to prove his innocent.

Shahana asks her to calm down. Prachi tells that she wants to get rid of her pain. Shahana asks her to take some rest. Ranbir is still asleep due to the medicinal affect. Rhea tells Aaliya that she is happy seeing Prachi losing to her, Prachi left the room and cried a lot, even Ranbir didn’t go after her this time, he was just standing there for her/Rhea. She is sure that he felt for her, he had the fear of losing her. Aaliya gets an important phone call. She tells Rhea that she will tell the next plan in the morning. Rhea goes to Ranbir. He wakes up and sees her. Shahana consoles Prachi and tries to put her to sleep.

Ranbir clears to Rhea that he isn’t comfortable to share the room and bed with her. He asks her to either leave the room or sleep on the couch, else he would go to sleep in Prachi’s room. She agrees to sleep on the couch. Ranbir takes rest. Rhea goes to Aaliya and wakes her up. She cries and shocks Aaliya. Aaliya asks her why is she crying when she was so happy some time back. Rhea tells Aaliya that she was wrong, Ranbir shifted to the room for his recovery, family supported her instead Prachi, but Ranbir doesn’t want to stay with her, he said he isn’t comfortable with her, he asked her to leave the room, else he would go to sleep in Prachi’s room.

She feels he is staying there as a patient, not as her husband, he just wants rest, not love. She feels Prachi always comes in between her relation, she is the enemy of her happiness, she deserves to be killed. She tells that she will go right away and kill Prachi. Aaliya asks Rhea not to say such things. Rhea tells that she just wants to see Ranbir and herself happy.

Rhea has a dream that Ranbir and she start a new life as a married couple. She tells that she wants Ranbir to proudly say that Rhea is his wife. Aaliya gets pondering. She tells that they can have a plan, if this is possible then… Rhea asks her what does she mean to say. Aaliya tells that Prachi also felt that Ranbir’s love and concern was for Rhea, then they shall get this done again, an attack on Rhea and the blame on Prachi, then the police will arrest Prachi, Ranbir and the family will sympathize with Rhea, Ranbir will take care of Rhea and come close to Rhea, Prachi will be ruined forever. She promises to make the plan successful. Rhea asks what will they do to make this plan work.

Aaliya tells that they will have the plan execution done by themselves. She tells how they will plan the attack, and blame Prachi for the fake accident. Rhea and Aaliya wickedly smile. The new house help joins the Kohlis. Pallavi tells Vikram about Preeti’s leave. She gets upset when he updates her about Shahana. She tells him that Shahana is an unwanted person in the house, she doesn’t want to spoil her mood by talking about her. He apologizes. She asks Rhea to come for breakfast. Prachi sits to have food. Aaliya tells that Rhea has a bad habit to look down the window, than coming downstairs.

Vikram asks him to take rest. Ranbir asks them to have breakfast. Ranbir feels hurt in his arm. Rhea tells that she will feed him by her hands. Prachi reaches there. Pallavi and Aaliya ask Ranbir to have the food by Rhea’s hands. Vikram finds Prachi at the door and asks her to come in and have breakfast with them. He insists her to join them. Prachi joins them unwillingly. She gets to see Ranbir and Rhea’s moment. Ranbir gets speechless and tensed seeing Prachi watching him with Rhea. He feels answerable to Prachi. Ranbir chooses to leave from the room by making a work excuse. He ends the awkward moment. The family members leave. Rhea stops Prachi and warns her to not follow Ranbir.

Reviewed Rating for Kumkum Bhagya 3rd May 2022 Written Update Pranbir future: 4/5 This rating is solely based on the opinion of the writer. You may post your own take on the show in the comment section below.