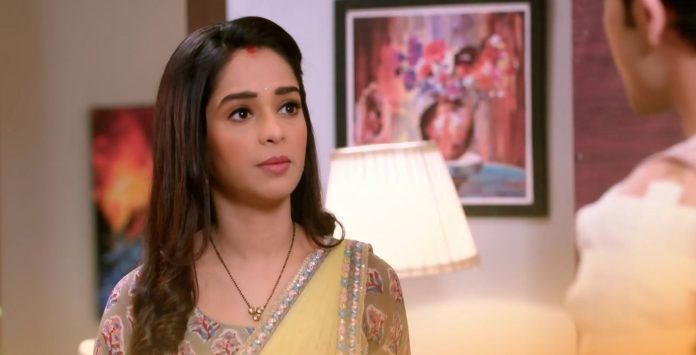 Kumkum Bhagya 9th May 2022 Written Update Heartbreaking Prachi asks Ranbir if he really thinks that she did anything wrong. He replies that he is sure that she did something wrong. Prachi gets really heartbroken by Ranbir’s unexpected statement. Rhea tells Prachi that just five days are left, Prachi will be out of the room and Rhea will get inside the room. She challenges Prachi. She tells that its Prachi’s illusion that she wants to snatch everything from Rhea. She adds that the reality is that Rhea won’t let Prachi take anything. She tells Prachi that Ranbir and Kohli family are of her, only her, she has everything in her control. What will Prachi do to prove her innocence this time and make her place secure in Kohli house? Keep reading.

Earlier in the show, Ranbir asks Prachi why is she scared. Prachi asks him what does he know. He asks her why is she shocked and scared, like she is really hiding a big thing. He tells that she can relax, he doesn’t know anything, but he knows that she is hiding anything. Ranbir tells that he is very sure that the matter is related to him. Prachi cries. He asks her to hide the matter well, because if he learns the matter later on, then he will not forgive her, he isn’t able to forgive anyone these days. Aaliya bring Rhea there and tells that Rhea needs rest, they shall take her home. Ranbir agrees to finish the formalities soon. Inspector tells them the findings. Rhea tells that Prachi wanted to kill her, not just harm her. Inspector asks her to calm down, Prachi would have made a bigger plan if she wanted to kill Rhea. Rhea and Aaliya demand Prachi’s arrest.

Rhea and Aaliya ask the Inspector to arrest Prachi. Aaliya tells that Rhea’s life is in danger. Ranbir tells that Prachi and he were having fights since many days, Prachi just wanted to harm him, she had opened the railing to make him fall down, but he doesn’t want to file any complaint against her. Inspector asks him if he wants to save Prachi. Ranbir tells that he is telling the truth. Prachi tells that she is not guilty, she didn’t do any crime, she wasn’t at home.

Ranbir asks her why is she going against him. She tells that she is supporting him. He doesn’t want that. Rhea tells that she can’t believe that Prachi was at home. Inspector tells that he won’t arrest Prachi now and will give her five days back to prove her innocence, if she fails to prove her innocence, then she will undergo an arrest. Ranbir asks how can Prachi prove her innocence. Inspector tells that Prachi has to tell them where she was, if she wasn’t at home, she has to tell them the timeline and get some witness also. Shahana know that Prachi had gone to the gynac. Ranbir and Prachi have a moment, when he heads to the car. Rhea sees Ranbir waiting for Prachi. Ranbir asks Prachi to sign in the car. Rhea hurries to sit in the car in front seat. Ranbir just has his eyes on Prachi.

Later, they return home. Pallavi asks Ranbir why didn’t Prachi get arrested. Prachi tells that she is where she should be. Ranbir asks her to talk to Pallavi well. Prachi tells him that she is talking the right way. Pallavi calls her shameless to show them attitude. Rhea tells that Prachi should apologize to them. Prachi replies that she can’t fake tears like Rhea does all the time. Ranbir calls it enough. He asks Prachi to listen to him for once. Shahana stops Prachi from arguing further.

Ranbir tells that police didn’t arrest Prachi and gave her five days to prove her innocence. He doesn’t want them to believe Prachi as the culprit. He asks them not to fight, because he is really unwell and expects his family to give him some peace of mind. He goes to his room to get some rest. Pallavi asks Rhea if she wants something. Ranbir stops to see Prachi. He can’t help his heart from loving Prachi. Prachi goes after Ranbir. Ranbir is really worried for Prachi. He calls some detective to give the case and save Prachi from the jail. He tells that no innocent should get jailed.

He decides to find out the truth. Prachi asks him if he thinks she has done wrong. He tells that he is sure that she has done wrong. She is shocked to hear that. Aaliya tells that wrong is happening in the house. Pallavi asks her what does she mean. Aaliya asks how can they ignore this. Dida asks her to say it clearly. Aaliya tells that she can’t tolerate the wrong happening with Rhea, Ranbir and Rhea are stressed, they aren’t able to live in peace. Dida tells that the family might have clashes, its common. Aaliya asks why doesn’t anyone think of Rhea, think of Ranbir’s mental peace at least.

She tells that happy go lucky Ranbir got much stressed, he has lost his happiness, he is stuck between two women, he doesn’t want to break his relation with Prachi because he doubts that Prachi wants to kill Rhea. She asks Pallavi when will she help Ranbir, he deserves to be happy, this can happen when they send Prachi out of the house. Prachi asks Ranbir if he believes that she can do wrong. He tells that he really believes so. She gets upset and turns to go. He asks her is she done, if he tells her that he doesn’t find her wrong and wants to support her, then she would say that she doesn’t want his help. She tells that she really wants to know if he believes her or not.

He tells that he is helping her because he believes her, a guy and a girl talk a lot to make their relation better and stronger but their relation is strange, they talk and fight to make bitter terms, they just have bad memories. He wants to hold the old golden memories. He tells that she won’t care if they stop talking. He asks her to go away if she wants to. She tells that she remembers it, he said he will stay with Rhea. He denies of saying that. She tells that he is very caring towards Rhea. They argue about Rhea. He tells that he won’t support her if she doesn’t want so, his belief doesn’t matter, the police will find the truth. Prachi asks him who kept the tools in her room.

He asks her if she is doubting him. She doesn’t want to talk to him. He finds Shahana at the door. She asks him if he doesn’t believe Prachi. He tells that she should not go on his words, but see his actions, he will save her. She asks him to save Prachi from going to the jail. Prachi finds Rhea in her room. Rhea tells that she is just doing Prachi’s work. She marks the dates on the calender. She tells that just five days are left, then Prachi will be out of the room and the house. She wishes that Prachi leaves the house on her own. She advises Prachi to leave the house today itself, knowing there is no better option. She plans to shift to Prachi’s room and redecorate it according to her choice.

Rhea asks Prachi will she give up once again. She wants to have the fun when she ousts Prachi. She tells Prachi that she has to take rest now, because she is hurt. She irritates Prachi. She lectures Prachi in anger. She tells that it’s a reality that she has Ranbir and the family with her, Prachi can’t snatch anything from her. She asks Prachi to say something. Prachi is stressed recalling Rhea’s ultimatum.

Reviewed Rating for Kumkum Bhagya 9th May 2022 Written Update Heartbreaking: 2/5 This rating is solely based on the opinion of the writer. You may post your own take on the show in the comment section below.