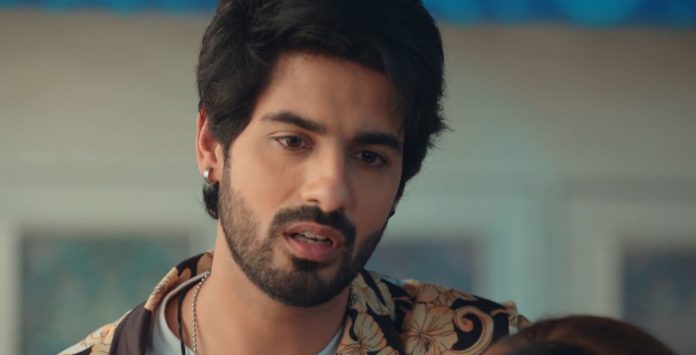 Yeh Hai Chahatein 23rd May 2022 Written Update Scared Rudra Prisha asks Rudra to help her wear her lehenga. Rudra initially shows reluctance but later on helps Prisha, seeing her hand pain. Prisha cutely tries to make Rudra get romantic and a little intimate with her. Rudra helps Prisha with her lehenga, dori, and jewelry. Rudra tries to not get much intimate with Prisha. He reminds Prisha that snake poison went inside him too and he is absolutely fine. Rudra asks Prisha if she isn’t feeling more pain than snake poison should actually pain a person. Prisha tells Rudra that the snake bit her, not him, so obviously she will feel more pain.

Rudra tells Prisha that he knows her antics well. Prisha tells Rudra that he would obviously know her well, as he is her husband. On the other hand, Saaransh tells Ruhi that he is waiting for the guitar he ordered for Rudra as a gift. He explains to Ruhi that the guitar he ordered for Rudra is one and only piece in the whole world. Ruhi gets happy hearing that Saaransh and she will be gifting a unique guitar to Rudra. She praises Saaransh’s idea. Ruhi convinces Saaransh to take care of other works as till then she will wait for his ordered guitar. Later, Ruhi and Prisha are seen getting Mehndi applied on their hands.

Rudra fails to avoid Prisha’s beauty and Prisha notices this. Prisha makes a plan and makes Ruhi convince Rudra to feed them food. Ruhi and Prisha with their cute antics make Rudra feed them. Revati notices the love between Rudra, Ruhi, Prisha and Saaransh and feels angry. But Sharda feels happy seeing Rudra, Prisha and their kids bonding. Everyone convinces Rudra to make Prisha eat food with his hands. Everyone laughs as Prisha bites Rudra’s hand while eating. Prisha reminds Sharda in front of everyone that it’s a ritual that the groom writes his name in his bride’s Mehendi himself.

Sharda agrees to Prisha and makes Rudra write his name in Prisha’s mehendi. Revati feels angry and still blames Rudra and Prisha for making her alone in this world by exposing her husband and son. She decides to do something and end/delete Rudra and Prisha’s happiness. She takes out a water bottle from the refrigerator and hears the servants discussing that Prisha has asked to keep Rudra’s juice ready. As the servants step out of the kitchen for some other work, Revati mixes a lot of salt in Rudra’s juice. After this, servants bring juice for Rudra.

When Rudra refuses to drink it, Prisha convinces him to have it for his health. Rudra spits out the juice and angrily asks Prisha if she gave him juice or poison. He says this juice is full of salt. This shocks Prisha and Saaransh. Revati laughs hearing and seeing all this from a distance. Rudra rudely asks Prisha to stop her nonsense behavior and love drama. He leaves telling Prisha that he can’t forgive her ever. Saaransh gets upset witnessing all this. Revati gets very happy. He follows Rudra to his room. Saaransh questions Rudra why he is behaving so harshly with Prisha. He tells Rudra that he can see everything.

He also reminds Rudra that Prisha remained away from her family and even changed her name for him (Rudra). Saaransh asks Rudra if he doesn’t remember all this. He says Yuvraj murdered his father (Rajeev), not Prisha. Saaransh asks Rudra if be thought how sad Prisha would have been after knowing that Yuvraj murdered Rajeev. He tells Rudra that even he hides small things from family and lies to everyone because of fear. Saaransh says Prisha had such a big truth in front of her. He asks Rudra to think that Prisha would have also feared that he (Rudra) would get angry and hurt, knowing this truth.

Saaransh says Prisha wants their family to remain happy, not sad and thus would have hid such a big truth from everyone. He says after all this, Prisha would have even herself forgot about Rajiv’s murder or may not have found it right to make everyone sad by telling this truth. Saaransh says he can understand Prisha’s helplessness being so young and asks why can’t he understand Prisha even being an adult. He tells Rudra that Prisha would have thought that he will torture her like these days, if she will tell him the truth. Saaransh reminds Rudra that he would have been on the road and addressed as an illegitimate child, if Prisha wouldn’t have stood for him.

He tells Rudra that today he is with his whole family (Khurana family) just because Prisha projected herself as a bad woman in front of the world and fought the world for him. Saaransh tells Rudra that he won’t call his mother bad or treat her badly. He reminds Rudra that recently Prisha saved Sharda from the snake bite, staking her life. Saaransh tries to make Rudra realize that he even expressed his love for Prisha by taking out snake poison/venom from her body and staked his own life. He reminds Rudra that they have yearned for Prisha for the last 5 years.

Saaransh says they even have Ruhi with them, whom Prisha brought facing a lot of struggles. He also reminds Rudra that Prisha saved him from Dev’s murder charges too. Saaransh tells Rudra that to save him, Prisha didn’t even fear Dev’s dangerous father. Saaransh tells Rudra that he will regret his whole life, if he will lose Prisha this time. He says at present Prisha is even apologizing to him and wants to get back to his life. Saaransh requests Rudra to forgive Prisha and live with her like before. Rudra requests some time from Saaransh to fulfill his wish. Saaransh asks Rudra to not take much time as otherwise he may lose Prisha again and forever.

Saaransh tells Rudra that not everyone gets this much lucky again and again. Rudra gets scared and worried hearing this. Saaransh leaves from there upset. In the next episode, Saaransh will reveal to Prisha that he got to know the whole truth about Rajeev’s murder. Prisha will get worried hearing this. Saaransh will announce Rudra’s performance. Rudra will use Ruhi and Saaransh’s gifted guitar for his performance. Everyone, except Revati will get shocked and worried seeing Rudra faint.

Reviewed Rating for Yeh Hai Chahatein 23rd May 2022 Written Update Scared Rudra: 3/5 This rating is solely based on the opinion of the writer. You may post your own take on the show in the comment section below.