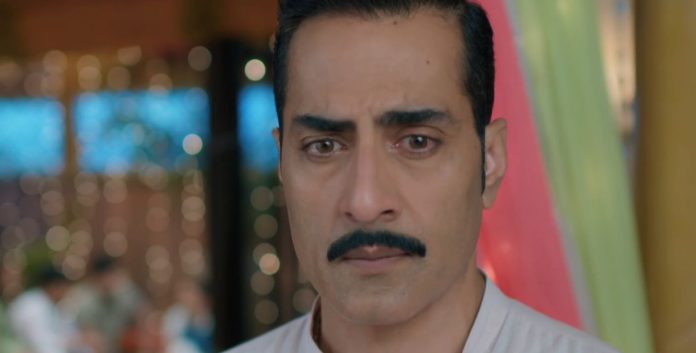 Anupama 26th May 2022 Written Update Broken Vanraj Anupama feels happy about getting a new house, new husband and a new stove. She decides to make halwa with tea for her “pehli rasoi” ceremony/ritual as GK and Anuj like it a lot. She searches for a lighter in the kitchen. Anuj comes and tells Anupama that he has got an automated stove for her in the kitchen to reduce her problem. Anupama gets very happy hearing this. She thanks Anuj. On Anupama’s insistence, Anuj explains to her the features and working of the new stove.

On the other hand, Vanraj walks on the road recalling Kavya’s words and divorce wish. He grows angrier. Seeing Anuj, grating ginger, Anupama asks Anuj why is he doing all this. Anuj reminds Anupama that he told her that they will always do household chores together. He tells Anupama that office and outside work can be handled alone. Anupama tells Anuj that she is making halwa and tea for him and GK. They smell the halwa together and remember a similar moment from their past. Anupama scolds Anuj for pretending to get hurt. Anuj convinces Anupama by his naughty actions.

He notices Anupama’s sadness. Anuj tells Anupama that she can always and at any time talk to her family as he will never have any issue with it. He tells Anupama that Samar texted him last night that everyone went to Vanraj’s maternal grandmother. He says he hopes that everything is fine. Anuj says he wants to ask about Bapuji’s health too. He makes a video call to Samar but he doesn’t pick it up. They also try calling Bapuji, but he also doesn’t pick it up. Anuj and Anupama think to call later as everything may be sleeping due to wedding fatigue. On the other hand, Shahs decide to not trouble Anupama on her first day after wedding with their issues.

Everyone agrees to Bapuji’s decision. Bapuji says he hopes that Anuj and Anupama don’t call Baa. At the same evening notices and wonders why Baa looks so different and angry. Vanraj comes and tells Shahs that he wants to talk to them. All supporters of Anupama look confused. Anuj takes the tea tray and asks Anupama to bring the rest of the things. He kisses Anupama’s cheek. Anupama asks Anuj how it will look, if GK sees it. Anuj tells Anupama that he doesn’t want her to express her love to him by doing all his work and treating him like a child. He requests Anupama to not spoil him.

Anuj tells Anupama that whenever he will need such treatment, he will himself request her for this. He asks Anupama to not do all his work till he himself requests her for it. Anupama recalls Vanraj making her do his work even when she was pregnant with Pakhi and unwell. Anupama starts crying and apologizes to Anuj. Anuj requests Anupama to not cry. On the other hand, Vanraj tells his family that he thought of bidding farewell to egoistic and angry old Vanraj forever with Anupama’s bidaai. He says he failed as his anger doesn’t leave him ever and finds him out from some or the other way.

Vanraj tells his family that they will always be related to Anupama and fulfill their relationship requirements from a distance. He says he has decided that they won’t interfere in Anupama’s new life and won’t let Anupama interfere in their lives. This decision shocks everyone. At Kapadia Sadan, Anupama tells Anuj that since beginning she has seen her mother, maternal grandmother and Baa doing their husband and children’s work to express their love towards their children and husbands. She says doing some or the other thing for others is in her DNA. Anupama scolds Anuj for correcting her pronunciation.

Anuj apologizes to Anupama and asks her to carry on. Anupama tells Anuj that she won’t change her nature for anyone. She also tells Anuj that she won’t spoil him or work like his slave, but will take care of him for sure. Anuj kisses Anupama’s cheek telling her that he will for sure take care of him. He mimics Anupama and leaves with the tea tray. Anupama wards off bad sight from her and Anuj’s new relationship. She feels that something isn’t right with the Shahs. Anupama tries to calm herself. She prays to God to take care of Shahs and Anuj. He says Anupama was the one who kept everyone together.

Vanraj says that now it’s his responsibility to take care of Shah house and its relations. He says till now he just took care of financial needs of Shah house but will now take care of Shah house’s relations and its members’ feelings. Vanraj says he doesn’t need any Anupama or Kavya to handle his own family. He tells his family that he just needs their support. Vanraj also tells everyone that now the Shah family will have to get habitual of working without Anupama’s support. He says he and his family are enough for each other. Vanraj apologizes to his family for troubling them with his misdeeds. He asks his family to have a new beginning.

Vanraj says his shoulders can still hold his family’s whole burden. He says this family doesn’t get affected by anyone’s entrance and exit as this is Vanraj Shah’s family and he is still alive. Everyone feels worried with Vanraj’s tone. Vanraj leaves. Baa says now everything will happen according to Vanraj’s wishes. Baa’s words increase everyone’s worries. On the other hand, Anuj and Anupama are seen feeding breakfast to each other. They recieve Kinjal’s video call. Kinjal wishes good morning to Anupama. Anupama asks Kinjal why she is smiling so much, if something happened. Kinjal stutters and says no.

Worried, Anupama asks Kinjal what happened. Pakhi, Paritosh and Samar join the video call and say surprise. They tell Anupama that it was a prank. Anupama tells her kids that they almost scared her. Kinjal says that Bapuji told her that this way bad sight gets warded off. Anupama shows Anuj and GK to her kids. Anuj asks Anupama’s kids how they are. Samar tells Anuj and GK that they will get spoiled the way they are eating. Anuj tells Samar that his and GK’s stomach will grow fat, if his mother will cook this tasty food. Paritosh asks Anuj to make this complaint to his own wife.

After this, Kids make Anupama talk to Bapuji. Bapuji explains to Anupama that he did everything according to her and the doctor’s instructions. Anupama one by one confirms everyone’s well-being. She notices Baa sitting angrily. Anupama asks Samar what happened to Baa. Baa asks Anupama how she and her mood matters to her. She also asks Anupama to live in her palace like a princess. Baa’s behavior shocks everyone, especially Anuj and Anupama. Anupama asks Bapuji to tell her what happened to Baa, if Baa’s mother is fine. Vanraj takes the phone and asks Kapadias to not take any tension as Baa is angry with them on some normal topic.

Anuj and Anupama disconnect the call. Anuj says he is glad that Vanraj is behaving like normal men. GK wards off the bad sight. Anuj tells GK that it’s not good for him to have so much food or sweets at his age. Both GK and Anuj start arguing for the halwa. Anupama stops their argument and tells them they won’t get food in the afternoon, if they behave like this. Anuj and GK stop arguing and tell Anupama that they for sure need afternoon’s food/ lunch. Anupama gets happy seeing Anuj and GK’s cute nature. On the other hand, Vanraj asks his family what was all this.

Bapuji asks Vanraj to question Baa, not the children. Baa asks everyone if she won’t get angry seeing everyone happy, when her son’s divorce is taking place. She says Anupama is happy in her new family and house and Kavya is shamelessly wandering with her ex. Baa says no one is thinking about her son. Bapuji asks Baa why to spoil Anupama’s day and what is her fault in this. Baa asks Bapuji why he is not worried about Vanraj’s life, which is getting ruined. Bapuji says he is worried about Vanraj’s life too. He tells Baa that Vanraj’s happiness won’t return by spoiling others’ happiness. Vanraj stops Baa and tells his family that his house’s issues shouldn’t reach Anupama’s house.

Next morning, Anuj tells Anupama that they are going for a honeymoon. Anupama gets shy. In the next episode, Anupama and Anuj will spend a romantic time with each other on the beach. On the other hand, Baa will get furious seeing Kavya openly going to meet Anirudh.

Reviewed Rating for Anupama 26th May 2022 Written Update Broken Vanraj: 4/5 This rating is solely based on the opinion of the writer. You may post your own take on the show in the comment section below.