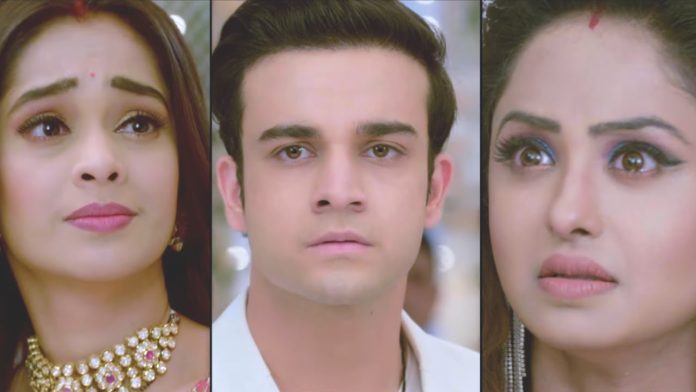 Kumkum Bhagya Ranbir divorces Rhea 31st May 2022 Kumkum Bhagya episode spoiler – Ranbir to divorce Rhea Ranbir tells Rhea that since he has fallen in love with Prachi things have appeared clear for him. He asks for a divorce from her. Rhea is shocked. She pushes Prachi but Ranbir saves her. Pallavi says that only Rhea is the daughter-in-law of this house. Ranbir declares that Prachi is his wife and is going to be the mother of his child. He says that he is leaving the house for his family’s security and happiness.

Anuj takes Anupama to Nanhi Pari Anath Ashram. He says that a child’s first word is a mother but in ashram he had to spread his hands to ask for anything and he learned to say Thank you first. Anupama becomes emotional. Anuj says that a family’s absence in a child’s life is the biggest curse ever and getting a family’s love is the greatest blessing. A little girl wears ghungroo and prays to lord Krishna to give his good luck wala blessings to her.

Abhimanyu asks the nurses what is going on here. He says that if he will complain to the medical association then the hospital will shut down. Akshara gets worried. Harshvardhan asks Akshara why did she call Abhimanyu to a third-rate hospital and insult him. He warns her that if Abhimanyu’s image is ruined then he will forget that she is also a Birla. Abhimanyu enters.

Pratha declares that she is sacrificing her powers for her love. She looks lovingly at Rishabh. He calls Pratha and she goes towards him. Mahek stabs Pratha and holds Rishabh’s hands. Rishabh gives a wicked smile. Pratha loses blood and falls down. Shesh Naagin Pratha is splashed water on her face and thrown in jail. She shouts loudly as she is pregnant and adoringly caresses her baby bump.

Banni Chow Home Delivery episode spoiler – Banni’s teachings:
Malini’s right-hand girls question Dadu about giving permission to a low-class girl like Banni to sit on Yuvan’s bed. Banni decides to teach them a lesson and troubles them. They both ask Banni to stay within her limits. She asks them to call her madam and they do as said. Dadu enjoys the scene. Banni warns them to behave or else she will straighten them up.

Pandya Store episode spoiler – Kamini blames Dhara:
Rishita is about to fall but Dhara and Raavi catch her. Kamini says that it is all Dhara’s doings. Dhara is shocked. Kamini says that Dhara once again tried to kill Rishita’s baby. Rishita gets up in shock and looks at Dhara angrily. Dhara becomes speechless.

Revati comes wearing a mask and says that this was her final blow. She says that this poisonous smoke will kill every one of them. Revati declares that her final strategy will be to conduct a war between Preesha and Rudraksh. She takes Ruhi away with her forever.

Priya gets pushed by Shivina. Ishaan gets angry and pushes Shivina down the stairs. Shivina falls. Ram cries and asks who did this with Shivina. Priya says that she didn’t do anything purposely as she was just trying to stop her. She says that by mistake Shivina got pushed and died. Ram gets angry with Priya. The police arrest Priya and take her away.

Mose Chhal Kiye Jaaye episode spoiler – Armaan’s heartless decision:
Soumya is lying on the hospital bed. Armaan gets to know that Soumya is very critical and he has to choose between her and the child. He says that if such a situation arrives then they should save his baby anyhow.

Chhavi asks Nutan that if Pari is so innocent then why does she target Bhoomi all the time. Dev says that enough is enough. He declares that he has organized a music show next week to prove that Pari can achieve everything that a normal person can. Dev says that Pari will sing in that show. Kaju and the girls try to escape but she gets caught.