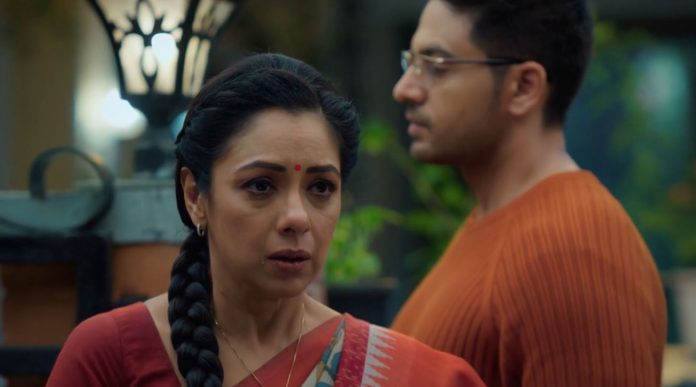 Anupama Kapadia family track 2nd June 2022 Written Update Anu gets happy after getting a big balloon from Anuj and Anupama. She runs here and there on the beach along with the balloon. Anupama asks Anu to be careful and not to go towards deep water. Anupama asks Anuj to sit nearby. Anuj keeps looking at playing Anu. He recalls how he used to play with balloons in his childhood, the similar way, just like Anu. On hearing Anupama’s voice, Anuj walks and sits with her. Anuj tells Anupama that Anu got very happy on the discussion of flying. Anupama explains to Anuj that a person who never flew doesn’t get sad by living on the land.

She says a person who flew for 2 moments and then never flew gets sad. Anupama prays to God that it should be Anu’s first flight, not the last. Anupama notices Anuj feeling emotional and restless. She asks Anuj to clearly tell her what is going on his mind without any hesitation and filtration. On the other hand, Vanraj overhears Kavya thanking Anirudh for making her remember how she used to do and enjoy late night parties. She says she enjoyed such a late night party after a long time. Call gets disconnected. Kavya says the battery dies at the wrong time. Vanraj asks Kavya to have some shame for happily talking to her ex-husband in front of her present husband.

Kavya reminds Vanraj how he used to happily talk, dance and celebrate all festivals and occasions. Vanraj tells Kavya that his and Anupama’s case was different. Kavya tells Vanraj that she doesn’t want to know his reason about why his and Anupama’s case was different as it could lead to an argument between them. She says life is very small for arguments and they should move on. Kavya leaves and Vanraj wonders till when he will have to tolerate all this. In Mumbai, Anuj tells Anupama that people complain to god by asking him/her why he/she made troubles and bad people. He says he doesn’t have such complaints from God.

Anuj says he just has one complaint from God that why he/she made children orphan. He says the biggest pain, sadness and injustice is to be born an orphan. He says this is that land which has no sky. Anuj also says that orphan kids can’t express themselves but can feel and think. He further says orphan kids question why only they took birth as orphans. Anuj says orphan kids wonder what is their fault that they have to sleep without hearing a lullaby from their mothers and why they have to wipe their tears on their own on getting wounded. Anuj tells Anupama that he thought his wounds and sadness of being an orphan have got buried somewhere deep inside his heart.

He explains to Anupama that he wishes to have a complete family like she has. Anuj further explains to Anupama that he also wants someone who belongs only to him. He says now he understood why everyone wishes to have children. Anuj says people live their childhood once again through their kids’ childhood. He says everyone wants their spitting image to grow up in their courtyard. Anuj says little made him recall his childhood and spitting image. He tells Anupama that he wants to make little Anu his daughter and wants to become her father by adopting her. Anupama looks at Anuj with stunned expressions. On the other hand, Devika visits Shahs and gives Bapuji’s medicines to Kavya.

He says he doesn’t know how he suddenly blurted out what was in his heart. Anuj tells whatever the situation may be, his wish to have a child or become a father. He tells Anupama that maybe Lord Krishna has sent him to Mumbai, so that he could meet little Anu and their family could get completed. Little Anu asks Anuj and Anupama to come to her. Anuj notices stunned Anupama wiping her tears. Little Anu makes Anuj and Anupama wear the bracelets just like hers. She says that the three of them are the same. Little Anu hugs Anuj and Anupama and they look just like a happy family. On the other hand, Kavya tells Devika that she is the world’s bestest best friend.

She tells Devika that she wishes that she becomes her friend too one day. Kavya explains to Devika that the ways of living in Shah house and their fights can be understood by living here only. She asks Devika to let handle the activities in the Shah family. Devika tells Kavya that she can understand her and it’s completely her choice and decision about moving on. She asks Kavya to never forgive someone just because that person deserves her forgiveness but because she deserves peace. Devika tells Kavya that Vanraj got involved in Anupama’s happiness because she moved on by forgiving him. She explains to Kavya that breaking a relationship is okay but ruining it is not okay.

On the other hand, Kavya helps Kinjal’s feet pain by pressing it down. Kinjal requests Kavya to not do it as she is elder to her. Kavya asks Kinjal to chill as she is not making her press her feet by force or evil trick. Kinjal asks Kavya who applies such a cheap trick. Kavya tells Kinjal that she once did it with Anupama. She says Anupama understood her drama but she still pressed her feet. Kavya tells Kinjal that she can’t become like Anupama, but can try to become less evil. Kinjal smiles and thanks Kavya. Kavya suggests Kinjal to live with Rakhi for some time. Kinjal explains to Kavya that Rakhi won’t have time for her. She says she will feel lonely there with just servants around her. Kavya understands that being happy with family is more important for Kinjal.

She gets worried when she notices tension and confusion in Anupama’s voice. On Devika’s insistence, Anupama tells Devika all about her and Anuj’s Orphanage visit, how they met Little Anu, who is very much similar to her and Anuj and Anuj’s wish to adopt little Anu. Devika gets shocked hearing this. Anupama tells Devika that she understands Anuj but how she can adopt a child. Devika tells Anupama that they can’t understand Anuj’s this emotion as they never lived an orphan’s life like Anuj lived. She asks Anupama to make a decision by thinking practically, not emotionally. Devika tells Anupama she better understands that handling a kid is a big responsibility.

Devika disconnects the call wishing, “All the best” to Anupama. She wonders why such a thing is happening with Anuj and Anupama just after marriage. Devika says neither Anuj is wrong nor Anupama. She prays to God to show the right way to Anuj and Anupama. In Mumbai, Anupama and Anuj are seen staring at each other with deep thoughts.

Reviewed Rating for Anupama Kapadia family track 2nd June 2022 Written Update: 4/5 This rating is solely based on the opinion of the writer. You may post your own take on the show in the comment section below.