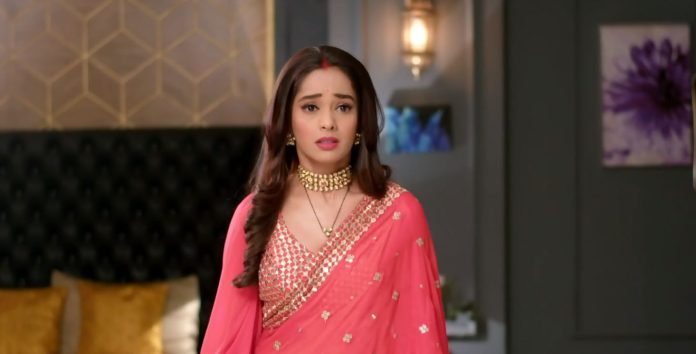 Kumkum Bhagya 13th June 2022 Written Update Prachi shocks Rhea Rhea tells Prachi that Ranbir is going to propose her. Prachi is shocked on hearing this. She refuses to leave the house. Pallavi mocks Prachi’s emotions. She tells that Prachi doesn’t want to go now, but Ranbir will send her away, he will oust her, he has bought their old rented house to gift to Prachi as a farewell memory. She asks Prachi to leave the Kohli mansion. Rhea asks Prachi to keep her problems to herself, because her problems will never get solved. She tells that even Ranbir doesn’t want her problems to get solved. Prachi shocks Rhea by revealing her pregnancy. Rhea can’t believe the news. Will Rhea plan to kill Prachi and her coming baby? How will Rhea digest such a big news? Keep reading.

Earlier in the show, Prachi tells that Pallavi never understood her, and denies her relation with Ranbir. She expresses her feelings. She tells that she feels hurt when Pallavi calls Rhea her bahu. Pallavi tells that she was helpless to ask Ranbir to fill Prachi’s hairline in the police station.

Lawyer asks Ranbir to think again, if he wants to give his property to Rhea as alimony. Ranbir tells him that he wants to divorce Rhea, and wants to give her the alimony for the lavish lifestyle that she lives, it’s a kind of greed to satisfy Rhea, she is money-minded, she would be happy that he is giving everything to her. He knows that Rhea, her husband and kids won’t need to work ever, he is giving a future to generations. Lawyer repeats what all he is giving to Rhea. Aaliya overhears their conversation. She gets glad that Ranbir is thinking so much to make Rhea happy. Ranbir tells that he wants to give anything Rhea asks for, so that she doesn’t get insecure. Stanley finds Aaliya at Ranbir’s door and thinks what did she hear. Ranbir sends the lawyer. Stanley tells Ranbir that Aaliya has overheard him, she just left, she will go and tell Rhea about him. He tells about the goof up. Ranbir tells that Stanley understood his family really soon.

Pallavi taunts Prachi that Ranbir will send the latter away, when Prachi doesn’t want to go. Prachi calls it a lie. She tells that Ranbir will not send him anywhere. Pallavi tells that finally they are getting out of Prachi, the best part is that Ranbir is doing this happily, he is sending Prachi to the rented house which she loved the most. Rhea tells Pallavi that her dreams are finally getting fulfilled, she is really happy. Prachi makes a leave in anger.

Rhea tells Pallavi that Ranbir has bought a ring for her, he is going to propose her, he has decided to keep her happy, he is going to make up for the problems he caused to trouble her. Pallavi is really happy for her. She hugs Rhea and congratulates. Ranbir looks for Aaliya, while Rhea goes to call Vikram to help Dida. Prachi looks for Ranbir to get an answer from him. Rhea and Aaliya have great news to share. They want to say it first. Aaliya tells that she will share the news first. She reveals that Ranbir is going to gift his properties and business start up shares to Rhea to secure her.

Rhea is confused. She asks why would Ranbir give this to her. Aaliya tells that he would want to secure her, because he loves her. She adds that money is really important Rhea is lucky to get love and money also. Rhea shares the good news, that Ranbir is going to oust Prachi, he is gifting Prachi the rented flat, he is settling her there, which means Prachi is going to leave the Kohli mansion. Aaliya wishes Rhea happiness. She hugs Rhea. Rhea tells Aaliya that Ranbir deserves a hug. Ranbir finds them talking happily. Stanley tells that they are appearing happy like they got a good news.

Ranbir calls up Sudha. He learns that Sudha is leaving. He rushes to meet Sudha. He doesn’t listen to Prachi. Rhea and Aaliya are glad seeing his behavior with Prachi. Rhea asks Prachi to come with her. Ranbir stops Sudha from leaving. She tells that he didn’t give her two minutes and ignored her, its an insult. Sudha’s son tells that they also have some respect. Ranbir tells that he was hiding the surprise from Prachi, he is gifting the house to Prachi on his wedding anniversary. He wants the issues to get sorted. He tells that Prachi and his love story is really complicated. He makes a cheque ready for them.

He gets the house papers from them. Prachi asks Rhea what’s the matter. Rhea asks Prachi if she remembers this room. Prachi tells that its her room. Rhea tells that she had challenged her last week that she will oust her in seven days. She laughs seeing Prachi. She reminds Prachi how things changed for them. Prachi asks her to come to the point. Rhea tells that Prachi would be a big fool to think that she can oust her/Rhea from Ranbir’s life. She adds that Ranbir and she are a couple now, he has given her such hints that proves that he loves her a lot.

She shares the big news, that Ranbir is going to propose her. Prachi receives a shock. Rhea apologizes for shocking her. She tells that Ranbir is going to propose her tonight at 12, because it’s the same day when Ranbir left her in the mandap. She shares her happiness and dances. Prachi looks at her with anger. Rhea shows the calendar. She tells that Prachi will be out of the room, and she/Rhea will shift her with her husband. She asks Prachi to congratulate her. Prachi tells that she didn’t wish to say this, but Rhea left no choice. She asks Rhea to spare Ranbir. Rhea asks her not to cry here and go out of the house. She wants Ranbir to oust Prachi. Prachi shouts I m pregnant, and shocks Rhea.

Reviewed Rating for Kumkum Bhagya 13th June 2022 Written Update Prachi shocks Rhea: 5/5 This rating is solely based on the opinion of the writer. You may post your own take on the show in the comment section below.