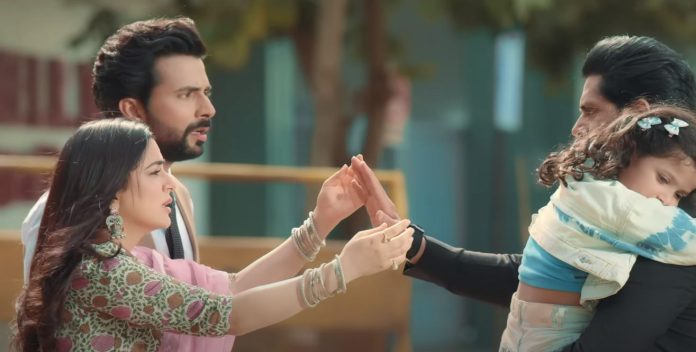 Kundali Bhagya 13th June 2022 Written Update Karan returns Prithvi tells Sherlyn that Preeta will die crying, but she will never marry Rishabh. He asks her to fit this in her mind. Sherlyn tells that Preeta loves her baby a lot, she can do anything to save her baby, she can marry Rishabh for the baby’s sake. Rishabh tells Mahesh that its not possible for him to marry Preeta who is Karan’s love. Mahesh tries hard to convince him to marry Preeta for the baby’s sake. After five years, a new start is seen in the show Kundali Bhagya. Preeta and Rishabh are seen as a happily married couple, taking good care of their daughter Kavya. Kavya lands into trouble when she runs to get some attractive toy and gets in front of the vehicles in the middle of the road. A truck speeds towards Kavya. Kavya shouts mumma in fear. Karan runs to save Kavya. He takes her in his arms in the nick of time and saves her life. Preeta and Rishabh come running there. Preeta thanks Karan for saving her life, her daughter.

Karan taunts her that the person who takes someone’s life doesn’t talk about life. He addresses her as Mrs. Preeta Rishabh Luthra. He leaves from there in his car. He disappears in seconds, taking along his daughter. Preeta and Rishabh are shell shocked, unaware of his identity, because of his new face after the crocodile attack. Rishabh consoles Preeta, and promises to get their Kavya back. Karan misunderstands Preeta and Rishabh, that they both have attempted to kill him. Karan takes an identity of a rich and confident businessman Arjun.

Earlier in the show, Prithvi shockingly claims that Preeta is carrying his child in her womb. Rishabh bashes him up. Preeta asks Prithvi what nonsense is she saying. Prithvi tells Rishabh that he doesn’t know anything because he wasn’t there. Rishabh rebukes him. Prithvi tells that its his child, he was shouldering Preeta when Karan was fighting with her, she used to cry on his shoulder, and one night she has come close to him, she is pregnant with his child. Preeta breaks down. She tells the family that Prithvi is lying, its Karan and her baby. The family believes Preeta, and finds her in much pain. They also cry along with Preeta. Prithvi succeeds to ruin their happiness, and fills tears in their eyes. Rakhi hugs Preeta and consoles. Rishabh throws out Prithvi from the house and shuts the door.

Prithvi shouts that he will tell the world that Preeta is going to give birth to his baby. Preeta tells that Prithvi is lying, its Karan and his baby. Rakhi asks Preeta not to cry, they will never believe Prithvi, they trust Preeta and her character. She knows that Karan and Preeta loved each other a lot. Preeta thanks Rakhi for showing faith on her. Bani tells that they all trust Preeta, but Prithvi is a devil, he will always try to malign Preeta’s character. Kareena tells that they all know the truth that its Karan’s child, Prithvi is disgusting to say this.

Kritika tells that they have to shut up Prithvi’s mouth, else he may make the world against Preeta. Mahesh tells that they will silent Prithvi in a way that he can never stain Preeta’s character. Bani tells that when a young girl becomes a widow, then the people’s thinking changes and they blame the girl’s character. Rakhi agrees with Bani. She also wants to protect Preeta’s dignity. Kareena understands Rakhi’s concern for Preeta. She tells that many such Prithvis come in front of them and trouble, they have to shut them up. Mahesh asks Rishabh to help them. Rishabh tells that he is ready to help Preeta, but he doesn’t understand the logic. Rakhi asks Preeta to help.

Bani explains that the ritual means an unmarried guy from the family must marry the young widow to protect her. Rishabh asks what are they saying. Mahesh asks Rishabh to marry Preeta, though Rishabh isn’t unmarried, but single now. Rishabh asks them to see the times they are living in. Mahesh asks him who will give a name to the baby. Rishabh finds this idea really disgusting. He tells that they can protect Preeta as a family, this is not the way to talk and hurt her sentiments. Preeta breaks down and runs to her room. She is against the remarriage. Rishabh tells them that they have done this, they have hurt Preeta. he opposes the old customs of protecting the widow by getting her remarried against her wish.

He goes to talk to Preeta. Kareena and Bani tell that they aren’t saying wrong. The family goes to see Preeta and find her locked in the room. Preeta talks to Karan’s photo. She tells him that she can never get separated from Karan. The family worries that she can take a wrong step. Mahesh tells that she is a strong girl. Rishabh asks them to see the time and her mental state, is it right to ask her to marry. Bani tells that it’s the right time for Preeta to marry. They ask Preeta not to do anything to herself, and take care of the baby. Rishabh and Sameer break the door, and get inside the room.

They find Preeta crying for Karan, holding his picture. She tells that she can never get separated from Karan. Rishabh promises that nobody will separate her from Karan, she will always stay with Karan/his picture and memories. He tells that everyone loves her a lot. He asks her not to misunderstand them. Sherlyn vents her anger on Prithvi. She asks him why did he visit the Luthras and claim that he fathered Preeta’s child, they can get him arrested too. She worries for him. He tells that they can’t get him arrested, they will not believe him, but there will be sorrow spreading in the family.

He tells that he succeeded in ruining their happiness, Preeta was standing like a dead person, Rishabh was also totally tortured, everyone was mourning for Karan. He adds that Rishabh has to take up all the responsibilities now. She tells that Luthras have a solution, they will get Preeta married to Rishabh. He is confident that Preeta will die in Karan’s memory, she loved Karan a lot, she will never marry Rishabh. She tells that Preeta loves her baby more than Karan, the baby is Karan’s last sign, she will marry Rishabh for the baby’s sake. He asks her not to anger him. She feels Prithvi has spoiled everything. Rishabh, Preeta and Rakhi think of their Karan and sheds tears.

Mahesh, Sameer and Shrishti come to talk to convince Rishabh. Rakhi and Biji console Preeta and try to direct her life towards Rishabh. Biji asks Preeta if she loves Karan. Preeta nods in tears. Mahesh consoles Rishabh. Rishabh hugs him and apologizes. He feels he can never marry Preeta, who is Karan’s love. He tells that he can’t lessen anyone’s sorrow. Rakhi explains that Preeta loves Karan and also her baby. Preeta tells that she loves her baby a lot. Biji asks her not to live her life alone. Preeta tells that she will live alone. Biji tells that she has seen Sarla living alone and raising her daughters, but the society didn’t change, they always get against a young widow.

Preeta tells that she will also live as Sarla did. Rishabh asks Mahesh not to force him, Karan and Preeta are made for each other, she is Karan’s wife, he respects her, but can’t take Karan’s place. Bani and Kareena meet Rishabh and ask him not to run away from his responsibility. Bani asks Rishabh to handle the entire family. Rishabh tells that he will sacrifice his life and happiness for the family’s sake, he will keep all his responsibilities, but he doesn’t need to marry Preeta. Rakhi tells Preeta that the ancestors have made these customs for the sake of relation-keeping. She tells that many people have undergone this ritual, when one of the son passes away, then a young widow is left alone, so the other son marries her to save her dignity. She asks Preeta to agree for the sake of the coming baby.

She pleads to get Preeta’s consent for the marriage. Preeta asks Rakhi not to plead with her. She justifies that nobody can take Karan’s place in her life. Biji tells that Rishabh and Preeta’s relation will bring happiness in the family. Preeta asks them not to force her. Rakhi tells that both her sons love her, and she also loves them, they can live without Mahesh, but not without their mother, they don’t tell her the problems, they need a father when they are in trouble, children get strength and courage from their father. She asks Preeta to think of the child, who would ask for a father’s love. She asks if the child doesn’t deserve a father’s love if Karan isn’t alive. Preeta gets emotionally blackmailed by Rakhi. Rakhi tells that Rishabh can become the best father for Karan and Preeta’s child. She asks Preeta to just say yes. Preeta gives up and agrees. Rakhi thanks Matarani.

Reviewed Rating for Kundali Bhagya 13th June 2022 Written Update Karan returns 5/5 This rating is solely based on the opinion of the writer. You may post your own take on the show in the comment section below.