Yeh Hai Chahatein 21st June 2022 Rudra sees Prisha Spoilers Yeh Hai Chahatein episode spoiler – Rudraksh sees Preesha Armaan and his uncle see the news of Rudraksh coming to college as Raj Bansal’s guardian. He video calls Preesha and asks about the orientation. She says that it was good and the college is perfect for Pihu. Pihu says that she can take better care of his wife than him. Armaan is shocked to see Rudraksh standing behind Pihu. Rudraksh is stunned to see Preesha unconscious in the bathroom.

Akhilesh asks Manish to announce the game. He says that today’s game is related to bangles. Akhilesh tells everyone to make a pair and put them in their partner’s hands. Abhimanyu puts bangles on Akshara in anger and she gets hurt. She starts bleeding and throws the broken bangle. Abhimanyu catches her hand. Akshara becomes happy.

Ghum Hai Kisikey Pyaar Meiin episode spoiler – Sai startles Pakhi:
Pakhi informs Virat that she is fit to become a mother. She says that Bhavani has got her check-up done by a renowned doctor and asks him to convince Sai. She cries and requests Virat to give her a chance. Sai gets angry seeing Patralekha catching Virat’s hand. She calls out her name and she leaves his hand.

Gud Se Meetha Ishq episode spoiler – Neel threatens Jaidev:
Neel tells Jaidev that if he doesn’t want to file a police complaint against Phool Singh he will do it. Jaidev is shocked. Pari’s father asks her to seek Jaidev’s blessings for winning the prize. Pari reluctantly goes to touch his feet but Jaidev stops her. Everyone is shocked. Pari becomes disappointed and upset.

Woh To Hai Albelaa episode spoiler – Kanha-Sayuri win a prize:
The host declares that the pair who will dance till the last will win the competition. Anjali pairs up with Kanha but slips and falls on Nakul. Nakul saves her. Sayuri starts dancing with him and Anjali gets jealous. Kanha and Sayuri win the competition and get a prize. Anjali offers a spiked juice to Sayuri. She smiles at her and goes to drink it.

Kaamnaa episode spoiler – Niharika questions Manav:
Manav slaps Vaibhav. Niharika becomes angry with Manav. Sakshi tells her that Manav slapped Vaibhav because he was misbehaving with her. Niharika asks her to stop. She questions Manav about what relation he has with Sakshi and that why he is doing so much for her. Manav and Sakshi are taken aback.

Pihu is giving a head massage to Priya. She asks Priya to take her to roam at her and her prince charming’s favorite place. Priya comes to a temple and prays to the goddess. Ram also reaches there. They both together ring the bell. Ram and Priya are shocked to see each other. Ram’s family members are also stunned. 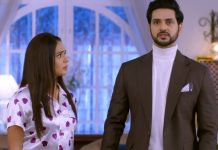 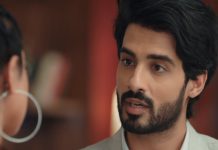 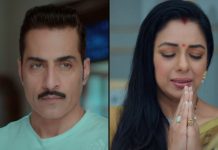